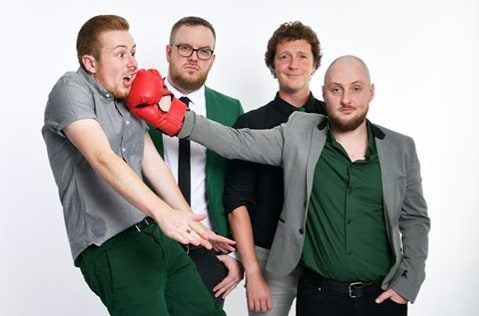 The Noise Next Door – four Brighton award winning stand-up comedians will be doing their first live performances together….but from their own bedrooms, as part of local comedy club Komedia’s Krater live streamed show this Friday 24th April on Youtube. Matt Grant, Tom Livingstone, Sam Pacelli and Robin Hatcher make up the madcap quartet who will be taking suggestions from the audience via Zoom and then acting them out, delivering their own brand of comedy within the confines of four separate screens..

“We’ve had a play with the technology.  – It’s a new challenge for us…but this week it was making us laugh!” said Robin Hatcher, who confirmed that  the comedians were really happy to do a live gig, having spent the last few weeks fighting cabin fever and manically filming ideas at home under lockdown: “Sam Pacelli has been busy watching 15 Disney animated classics and turning them into 15 second comedy epics on a daily basis, Matt filmed a sketch about Bob Dylan as an imaginary flatmate.”

The comedy foursome met at Uni and now all live in Brighton, and have were nominated for a Chortle Award in 2014, and have made numerous TV and radio performances as well as  performing alongside the likes of Michael McIntyre, Al Murray, and Harry Hill.

Always finding the bright side of every situation, Noise Next Door’s current project is to introduce five new sports in time for next year’s postphoned Olympics 2021.  Each performer is tackling their own new sport which includes; climbing, skateboarding, karate, surfing and baseball in their own homes and filming them.  In the next couple of weeks, audiences can go online and vote for their favourite sport, winning a Gold, Silver or Bronze medal.

This is the second live streamed Komedia event MC ‘d by Stephen Grant (direct from his son’s purple bedroom) and featuring a star studded line up of comedy talent including:  Andrew Ryan  Eleanor Tiernan,John Hastings – live from the US, Seann Walsh and Ninia Benjamin.  It’s free on Youtube, with Komedia asking for donations for the comedians.