‘People aren’t like they are in the movies, some of them don’t want to kill you’ – When Bjournal Met Joe and Caspar

What do you get when you let two famous YouTube stars film themselves going on a roadtrip? Pure entertainment of course! Joe Sugg and Caspar Lee star in their very own feature length film that sees them travelling across Europe in a VW Campervan. The catch? They can only use the money they can make for themselves each day, which inevitably leads to interesting and hilarious outcomes. Both Joe and Caspar have millions of subscribers between them on their respective YouTube channels, outside Vlogging Joe and Caspar were part of the ‘YouTube Boyband’ that raised money for comic relief and also featured in the UK version of The Spongebob Movie: Sponge Out of Water. Their film, Joe and Caspar Hit The Road, is now out on DVD and Bjournal were lucky enough to bag an interview with the YouTube stars and ask them all about it.

Congratulations on the successful launch of Joe and Caspar Hit The Road. Which part of the trip are you most excited about watching back on the DVD / download and why?

Caspar – I’m excited to watch myself fall into the water in Venice, because that was a really horrible moment for me at the time, but it will be funny watching it back

Joe – I’m looking forward to watching back the general chat whilst we were in the camper van because that’s when we were chatting a load of rubbish. Also, I’m excited to watch the party scene in the super yacht as that was a once in a lifetime opportunity
Give us three stories from your trip that these words remind you of…

Did you meet anyone along the way that you’ll never forget?

Caspar – Yes – Pascel, the guy that let us go on his yacht, he was cool – he was like a father to us
Joe – The crew were amazing and also Pascel who owned to super yacht who turned out to be an absolute legend

Caspar – how was it to be outside?!

Caspar – It’s not as scary as I thought it would be – people aren’t like they are in the movies, some of them don’t want to kill you, some of them actually want to help and we met great people along the way

You had to ditch your credit cards and earn your own money on this trip by taking on an array of jobs neither of you have any experience in. Which profession that you took on would you say was your favourite and why?

Joe, what was Caspar’s most annoying habit during your trip?

Joe – He kept farting, he’d fart when we were driving and had to stay in this hot box of Caspar’s farts – I almost threw up multiple times
Caspar, what was Joe’s most annoying habit?
Caspar – Joe’s most annoying habit is that he says things with utter confidence when he doesn’t fully get it sometimes – like this one time he was really tired so parked up and it wasn’t till the morning when we woke up that we found ourselves in the middle of this crazy roundabout. I think he needs to start thinking about his decisions more without just making them with utter confidence.

Friends share everything, right? Did either of you borrow each other’s stuff on the trip, without asking?

Caspar – No, I’m too scared of him
Joe – Luckily we didn’t have to borrow things from each other – and Caspar’s taller than me so we never got confused about whose boxers were whose. 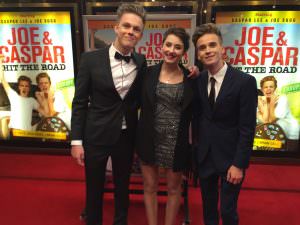 Have you learnt anything about each other that you didn’t know before the trip?

Caspar – I learnt that Joe is actually pretty good at using his body to do jobs – that sounds weird – but I mean that he was quite good at some of the jobs that involved more physical activity, and you wouldn’t expect it as he doesn’t look like the most physically capable person in the world
Joe – I learnt that Caspar’s not as useless as I thought!

If you could do your trip again, which other cities would you like to visit and why?

Caspar – I would love to do the same sort of thing in America and I’d definitely go back to Europe again … anywhere really. South Africa would be great – then I can really show Joe who’s boss
Joe- I would love to visit Australia and New Zealand, it would be a long way to drive, but so worth it! Or maybe Latin America

If you could prank anyone famous outside of YouTube, who would it be, why and what prank would you play?

Caspar – I’d like to prank Trevor Noah, he is a very famous South African comedian just because he’s the coolest person I’ve ever seen in my life. The prank is a hard one – I’d give him a sleeping pill and push him out of a plane so he wakes up in mid-air, with a parachute of course – hopefully it doesn’t go wrong
Joe – I would prank Ashton Kutcher because he’s a prankster himself – and I would prank him with his missus Mila Kunis – cause she’s alright.

What’s been the best thing about becoming YouTube stars?

Caspar – Being able to control content and when you put it out, whereas more traditional stuff you have more people involved to say what they want. On Youtube you get to be the director, the producer, the editor, the writer and the distributor – which is sometimes stressful, but at the end of the day you know what you’re putting out there is exactly what you want
Joe – Being able to interact with all the fans and knowing that there’s always people there for you. I’ve also made some really great friends!

What advice would you give to anyone who wants to become a vlogger?

Caspar – I’d advise them that they just have to love it basically – if you don’t love it, don’t do it as you wont be satisfied by numbers, you have to be satisfied by wanting to make videos and that’s what it’s all about.
Joe – Be consistent, be original and collaborate

Describe your friendship in three emojis…

If you were approached to do another DVD / download in a year’s time, where would you go/do?

Caspar – It’s hard – I really don’t care, I just want to travel more – there’s always something special about each place you visit
Joe – I would want to go to New Zealand or Latin America

Caspar – New video coming out every Monday on YouTube – so get excited about this Monday’s video!
Joe – More videos across all my three channels and I would love to create a graphic novel series!
You can buy Joe and Caspar Hit The Road here.

Yoga + Rave = A Night to Remember