Are we all ready to think about it again now? Have we all returned to earth? Kylie Minogue and Jessie J, one of the Queens of Pop and a pretender to her glitzy throne, both took to the Preston Park stage over Pride weekend. If you’ve scrubbed off the glitter and wiped away the eye-liner, let’s take a look at how the first mega headline act performed. Today it’s all about the perfect pop pixie from Melbourne. She didn’t disappoint… Featured Image © Spirit FM 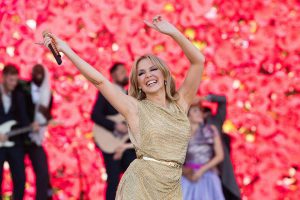 Kylie was launched from underground onto the main stage shortly before 9 pm on Saturday, following sets from fellow hit-makers Clean Bandit and guest slot surprise Emile Sande. With the Sussex sun still aloft she opened with ‘Love at First Sight’ and quickly moved into huge 80’s smash ‘I Should Be So Lucky.’ 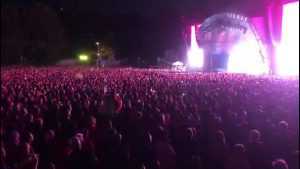 The diminutive Australian underwent several costume changes; the glamour of which accompanied a range of tunes which spanned her entire career. The mid-section of her set included ‘Slow,’ ‘Kids,’ and ‘Can’t Get You Out of My Head.’ She also managed to squeeze in another early-career hit towards the close of play – ‘The Loco-Motion’ – giving anybody old enough to remember it the first time around flashbacks of her unkempt, frizzy locks. 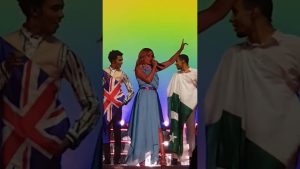 10 pm came and went, the re-usable cups had had their share of refills, some people were bracing themselves for a trip to St Jame’s Street. The surprise inclusion of Kylie’s set was enough to give everybody a last push for home and seems to have delighted her core fans more than any other. ‘Your Disco Needs You,’ which speaks about the power of disco music and the importance of inclusion, reached out across the park and set the tone perfectly for her triumphant encore.

With darkness now enveloping the elated Sussex crowd, Kylie moved into upbeat favourites ‘Especially for You,’ and ‘Better the Devil You Know,’ before tipping her artistic cap to Antipodean compatriot Nick Cave with a slow, a capella version of ‘Where the Wild Roses Grow.’ She finished up with ‘Spinning Around,’ which was fitting for a performance which took the adoring fans on a journey through decades, styles and tastes before spitting them out spinning into the Brighton night to carry on their Pride party elsewhere.