Home Food Ready to venture out again? Here’s the first place you should head... 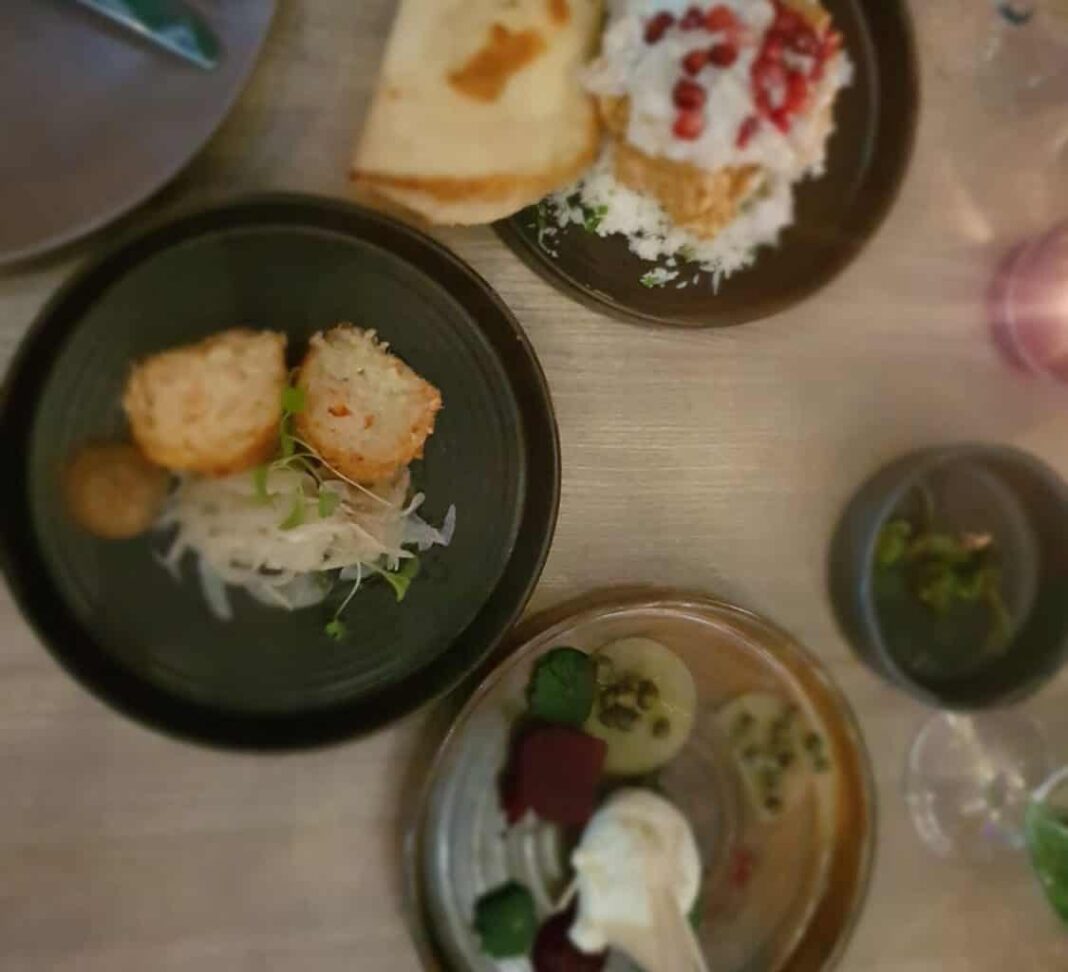 Amongst the lukewarm embers of the last decade, we told you about Cyan. Just over a month ago we attended the opening night of Brighton’s biggest and boldest new restaurant. The latest food and drink concept to sit at the heart of The Grand hotel didn’t disappoint. And now, in the flickering early light of the ’20s, we’re here once more, to home in on the food. If you’re ready to treat yourself to a meal out again following all of that festive indulgence, this could be the place for you.

Because we’re here as guests of the restaurant (myself and my ever-grateful plus-one) there is the scope to order far more than we need and of course we happily oblige, and then some. And because we’re experimenting with vegetarianism (however on this occasion we have allowed ourselves to eat fish) you won’t find any description of the numerous meat dishes Cyan have to offer. What stood out in particurlar from the carnivores dishes was its calves liver with maple bacon and the sirloin steak with kimchi, to name just a couple. We started with half a dozen small plates and nibbles, the first of which was the divine ‘Beets, horseradish, Sussex feta with Lilliput garden herbs.’ I’m not a great lover of beetroot, but it was worth it for the creamy feta alone, which just kept on coming. I found myself slowly spooning all of its oozy goodness for the first twenty minutes with great delight. 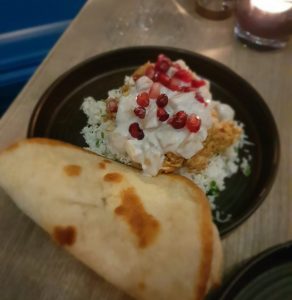 Our waiter, who like all of the staff we’ve encountered at Cyan over the two visits, was friendly and very knowledgeable about the food . He was also kind enough to plop down in front of us two oysters with Silly Moo apple, caulirice with jackfruit and flatbread, corn ribs with bloody Mary ketchup. That was followed by crunchy squid with gyoza sauce. Corn is quickly becoming a favourite of mine and this take on the classic was a success, as was the Japanese-style calamari, which has always been a favourite. Our first course seamlessly merged into the main event because all of the plates are here to be shared, as are the larger offerings and platters. This seems to be the ethos of Cyan, and I believe it will work as well for a group of friends heading out for a seafront stroll as it did us – a pair of gluttonous love birds. 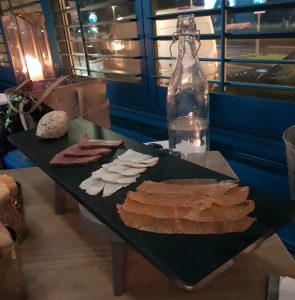 We had two of rounds of drinks  (Aperol spritz and the predictable Peroni) which helped cut through the fullness of our bellies. When we arrived for the final savoury round , it was a long slate board, delicately adorned with four types of cured fish (the tuna and the salmon were exceptional) and at £23 with extras on the side to mop up, it will comfortably suffice for two people especially if accompanied by a bottle of crisp wine and a natter whilst looking out to sea. We were placed at the front of the heated conservatory area, which has a great view of the old pier, but the impressive space in the main bar is also available for diners and drinkers alike. As discussed in my previous Cyan article, the larger room is a dazzling modern pantheon akin to a spaceship, but with sentimentally restored beams. All worth the intrigue, if you’re a Brighton socialite as well as a foodie. 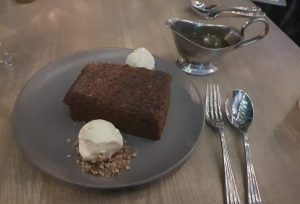 Before the food coma had chance to well and truly root us to our chairs, the waiter informed us the bill had an empty space which was crying out for a pudding. Who would we be to defy him? It’s always a choice between a brownie and sticky toffee pudding for us two traditionalists. They are of course more experimental here at Cyan, but there is the sticky date pudding which was mouthwatering tempting. It’s a huge doorstop of a thing and although at £11 it should be shared between two, In fact I’d say think three people could get around it without too much quarrel. If you’re not a date person (the edible type) then the banana ice cream it comes with will convince you otherwise. It was an exquisite end to an unforgettable meal. I’ve been lucky enough to try most of the big hitters on the seafront in recent years, Cyan may just have wrestled the top prize away from the others.

Thank you to all of the staff at Cyan, and to Tugay Gucel and Christine Humphrey for arranging. Cyan is open seven days a week between 11am and 10pm. For all booking enquiries go to www.cyanbrighton.co.uk or email bookings@cyanbrighton.co.uk.