Home Food Restaurant of the Week: What The Pitta 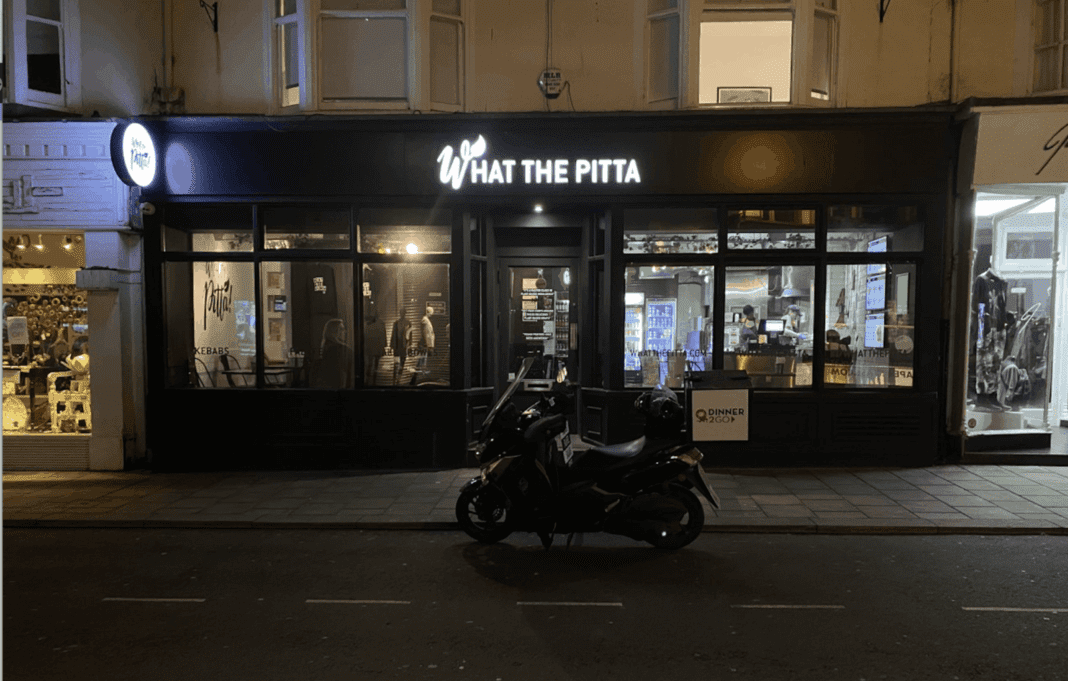 At the end of last week my partner and I had the pleasure of eating at What The Pitta. Not only us, but our dog, Pippa, too! We felt it was about time to highlight a dog-friendly establishment in this feature.

We have been fans of What The Pitta ever since we became vegetarians but we normally order delivery, so eating in was a nice change. They offer fully vegan kebabs, with a to-die-for meat alternative that’ll make you forget it’s vegan from the first bite.

We walked in to a sparkling clean, modern restaurant, located on East Street in the lanes. The décor is mostly black and white with green accents. The floor, tables, kitchen equipment, etc, were squeaky clean and immaculately organised. 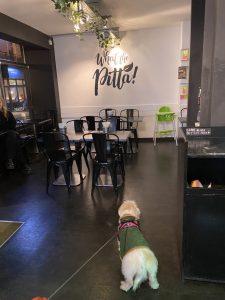 We were greeted by the lovely Priss behind the counter who took our orders. We noticed a meal+drink+ice cream deal for £12, so we decided to go for that. We both ordered a doner chipbox as it’s our favourite, however I can also vouch for the ‘chicken’ nuggets, onion rings, and the gyros wrap from past experiences.

The sauces available are burger sauce, chili, and garlic mayo, which are all fully vegan and homemade. We both got burger sauce and my partner added some garlic mayo. Is your mouth watering yet?

We then went to choose our drinks. Various San Pellegrino’s, green colas, and Capri Suns were on offer. My partner went with an orange and pomegranate San Pellegrino, while I chose a ginger beer. 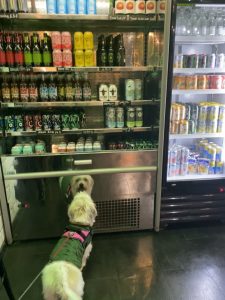 We chose a table near the back of the restaurant with a tin bucket containing paper napkins and wooden forks. We both noticed that as soon as another table left, Priss came straight over to clear it and make sure it was sparkling clean. 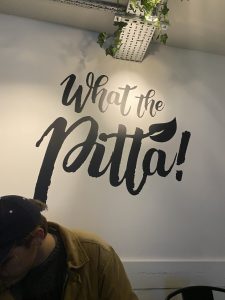 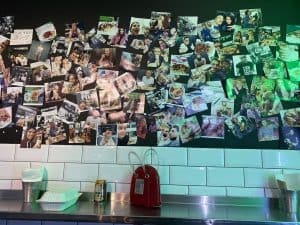 The décor is minimal. There is merchandise hung on the wall that reads “Meat Free Galdem” which makes sense considering the staff was entirely female. In the corner you can find vegan cookbooks on the wall. Over by the drinks there is a neon green sign that reads “Good Karma Kebabs”, and the adjacent wall hosts an eye-catching collage of happy What The Pitta diners enjoying their meals. 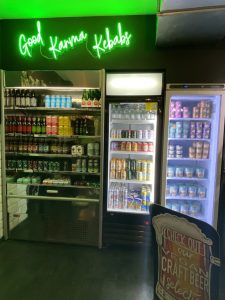 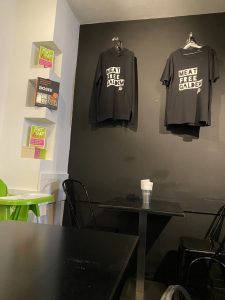 Our food came out quickly and there was a LOT of it. That’s why we both love the doner chipboxes – they are such great value for money. We quickly realised we had forgotten one crucial component – their fresh bread. I could eat it all day. It’s great for creating mini wraps out of the ingredients in the chipbox, dipping in the sauces, and even eating on its own. We each ordered one so we could do just that. 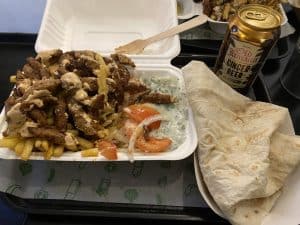 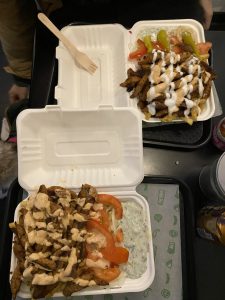 We dug in and both devoured the majority of our meals – we were extremely hungry when we arrived but still couldn’t finish. It’s just as delicious as leftovers, though! The ‘meat’ is perfectly seasoned and has a unique, signature taste. I remember the first time I bit into it I couldn’t believe I was eating a vegan meal. It’s just as filling and delicious as a regular kebab, but you don’t get that greasy bloated feeling afterwards. 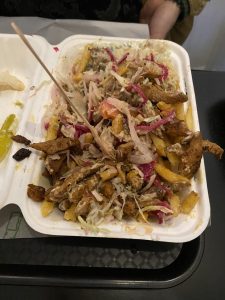 Everything from the meat to the vegetables are given in generous portions, and each ingredient compliments each other. The homemade sauces are incredibly tasty and tie the whole meal together. I dropped a chip on the floor by mistake but Pippa quickly snatched it and looked up as if to say “where’s the rest?”.

We also saved leftovers to leave room for dessert. Neither of us had ever tried vegan ice cream, so we were going in blind. When we approached the freezer we noticed the staff – Priss, Mallow, Billie, and Leona – seemed very communicative and upbeat. They even came over to say hello to Pippa! 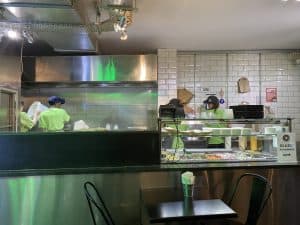 There were various classic flavours like vanilla and chocolate, as well as some more extravagant options – they even have vegan Ben & Jerry’s! We decided to get a couple made by Booja-Booja – the caramel/pecan/praline, and the hazelnut/chocolate/truffle. The staff also offered us a baklava, and that’s a hard offer to turn down! 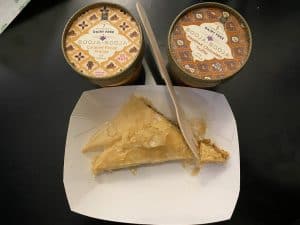 The caramel/pecan/praline was a very similar texture and flavour profile to Ben & Jerry’s, whereas the hazelnut/chocolate/truffle resembled the consistency of a set mousse. Both were indulgent, but the chocolate option was much richer, while the caramel was sweet and creamy. We couldn’t believe how tasty they were, as ice cream is something we’ve been reluctant to substitute. The baklava was fresh, light, and went beautifully with the ice cream. 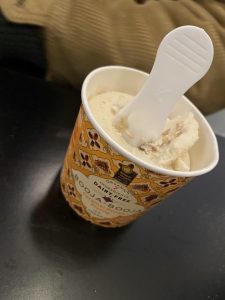 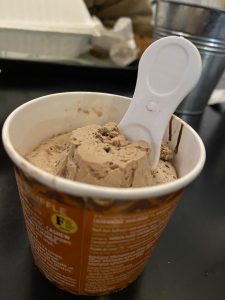 I cannot recommend What The Pitta highly enough, especially if you’re a dog owner. We were made to feel very welcome, and Pippa, who can be anxious in public/around strangers, was completely relaxed. Everything was outstanding from the food to the service, and it was definitely the best kebab shop experience I’ve had. If you want an affordable vegan meal that’s as filling as it is mouth-wateringly delicious, head over to What The Pitta – I promise you won’t be disappointed.