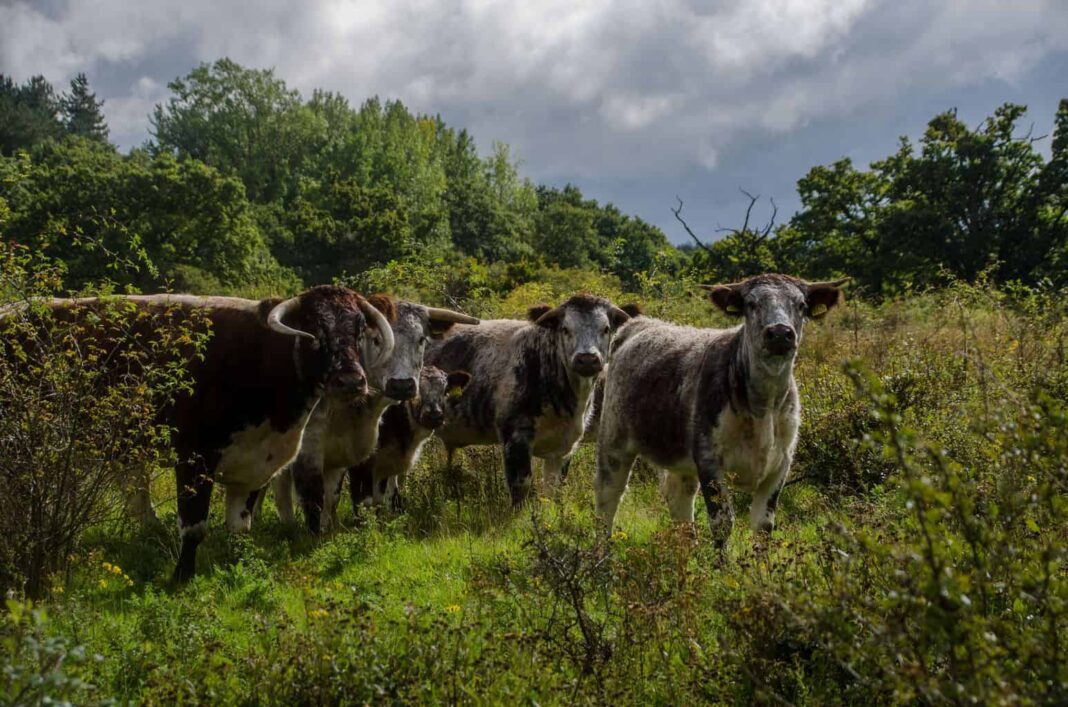 Nestled in the Sussex Low Weald, just seven miles south of Horsham, is Knepp Estate. Since 2001, this 3,500 acre estate, once intensively farmed, has been devoted to a pioneering “rewilding” project.

For many years, traditional farming at Knepp had failed to deliver profits, driving the Estate’s owners to think radically differently about the future of their land. In the years since their change of approach, Knepp has welcomed as visitors some of Europe’s rarest species, including black terns and black storks, while other endangered species like peregrine falcons, turtle doves and nightingales have made the Estate their permanent home.

“It sounds very unromantic,” Knepp’s co-owner and author of Wilding Isabella Tree tells me, “but it really was economics that initially forced the change. If farming had been a viable business we’d still be doing it, and be none the wiser. Only when your back is completely against the wall do you shed all your preconceived ideas about what is possible and start to look in completely different directions. I suppose a combination of this and our natural inclinations, a deep love for wildlife, led us to the idea of rewilding.”

Ecosystem restoration, wolves in Yellowstone. What is “rewilding”?

“Rewilding” is a concept that has come to have multiple definitions. For George Monbiot, author of the inspirational book Feral, it means “the mass restoration of  ecosystems” through the reintroduction of missing animal and plant species, particularly those considered keystone species. These are species that have a huge impact on their ecosystem, including parts of it with which they have no direct contact. By their very nature, they create habitats and opportunities for many other species. Good examples would be beavers, wolves, wild boar, elephants and whales.

Perhaps the most famous example of a successful rewilding project is the reintroduction of wolves to Yellowstone National Park in America during the 1990s. Here, the restoration of wolves to the top of the food chain has triggered a still-unfolding cascade of effects felt all the way down to the bottom of it.

During the 70 years that wolves were absent from the Park, the entire Yellowstone ecosystem had fallen out of balance. Coyotes ran rampant. The elk and deer population exploded, overgrazing willows and aspens. Without those trees, songbird numbers began to decline, beavers could no longer build their dams and riverbanks started to erode. Without beaver dams and the shade from trees and other plants, water temperatures were too high for cold-water fish.

After the wolves returned to prey on the elk and deer, these missing tree species very quickly started to rebound. Riverbanks stabilised. Songbirds returned, and so did beavers, now under less threat from their main predator, the coyote, whose numbers the wolves had brought under control. Eagles, foxes and badgers also began to flourish.

Before you ask, no, Knepp hasn’t reintroduced wolves to the Sussex countryside.

They have, however, reintroduced old English longhorn cattle, Tamworth pigs, Exmoor ponies, and various types of deer to their land, as “proxies for our missing large herbivores” like the giant aurochs and wild boar. These herbivores are free to roam and graze wherever they like, creating what Knepp’s owners refer to as a large “woodland pasture” which is not managed in any traditional sense.

Knepp’s approach is based on the the idea of “grazing ecology”, which suggests using grazing animals as the drivers of habitat creation, whilst not introducing so many that they completely take over. Without grazing animals, the scrub that would emerge from our fields would soon turn into closed-canopy woodland, Isabella tells me, which is “a very poor habitat for most wildlife”.

“These animals, they graze, they browse, trample, rootle, and break branches, and this disturbance provides a check on rampant scrub. These animals also transport and drop vital nutrients and seeds in their dung which enriches the soil and helps vegetation thrive.”

It is a question of numbers, however; too many grazing animals, and you are left with barren grassland.

“The battle between these two processes at Knepp – animal disturbance versus vegetation succession – has created all sorts of vegetation structures which contribute to a dynamic, ever-shifting mosaic of valuable habitats. This is what rewilding really means to me – abandoning strict targets and a focus on conserving a specific species and simply creating the conditions that will allow dynamic natural processes to flourish. It’s about pulling the glider back up into the sky.”

One notable absentee at Knepp is the animal that has dominated the British countryside for hundreds of years: the sheep. Isabella tells me this is because sheep “graze very, very tightly,” simply eating everything they comes across, which has a damaging impact on the environment.

“Surprising as this may be for people, sheep are actually relative newcomers to Britain, arriving from Mesopotamia a few thousand years ago. They have not co-evolved with the rest of our eco-system, and as such do not really live in harmony with it. The real issue with sheep is the huge numbers in which they have been given free rein to graze all over the countryside, meaning the land never really gets a chance to recover. Perhaps they have a part to play in the future, but their role has certainly got to change.”

Now 17 years into their project, the sheer speed of change at Knepp has astonished its owners.

“I’m sitting here talking to you, and looking out of my window I can see a pair of kestrels trying to see off a pair of little owls from a large oak tree,” Isabella tells me. “Every corner here is just heaving with life now. Walking through the grounds, the noise from the birds is completely overwhelming. It’s hard to convey just how loud it is to people who might not have experienced it before, but it really is an absolute cacophony.”

As well as being home to various species of critically endangered birds, Knepp also has the largest population of purple emperor butterflies in the UK, and in large numbers these insects produce a similar assault on the senses.

“The sound of a single butterfly is imperceptible,” Isabella writes in Wilding. “But tens of thousands have a breath of their own, like the backdraft of a waterfall or an accumulating weather front. It feels as though the oscillating susurration of their wingbeats, pounding away on their supernatural wavelength, might dissolve the world into atoms.”

The estate now makes its money from inviting visitors to come and experience this carnival of nature for themselves, offering safaris and various glamping spots in the middle of ancient woodland. If you’re lucky you might catch a glimpse of a lesser-spotted woodpecker while walking among the ancient trees or a bat swooping on insects late at night. If you visit in April or May, you might hear the ethereal sound of the nightingale throwing its song to the heavens.

“What’s amazing is it really doesn’t take long at all for these natural systems to begin to recover. All you have to do is put the drivers in place that can kick start the natural systems, and once you’ve done this, it basically isn’t hard work! You can just sit back and watch nature perform.”

Nature’s recovery at Knepp is a welcome slice of hope in an otherwise bleak picture for biodiversity in Britain. The IPBES State of Nature Report 2016 placed Britain “among the most nature-depleted countries in the world,” and we are currently on course to miss almost all our nature targets for 2020. It is the success of projects like Knepp’s, with their focus on “self-willed ecological processes,” that are gradually persuading people of the benefits of rewilding over traditional conservation methods.

“We never thought we could have the biodiversity that we now do at Knepp. If a depleted piece of land underneath Gatwick Airport’s flight paths can become a breeding place for turtle doves and peregrine falcons, that shows us that really anything is possible. Britiain should, and could, be as biodiverse as anywhere else. That’s the real message of hope here.”

As Isabella has already alluded to, rewilding is primarily about stepping back, about relinquishing control and putting nature back in the driving seat. In Wilding, she describes it as “restoration by letting go.”

“The trouble is, that picture-postcard image we all have of Britain, with it’s neatly kept fields, carefully cropped hedgerows and stone walls is so deeply ingrained in all of us. Intellectually, we might know that despite looking neat, our ecosystem is depleted and not functioning, that intensive farming is damaging our environment, but this pleasant patchwork is still what we expect to see. It’s incredibly hard to let go of.”

But this letting go is exactly what we need to do. In modern society, we have done our best to completely eliminate change and unpredictability, in every sphere of life. Mostly living in towns or cities, we are not surrounded by the constantly shifting cycles of the natural world. Even the changing of seasons could quite easily pass most of us by. We have convinced ourselves, in Isabella’s words, that we are “above nature rather than part of it”, that we are its rightful managers. It is this type of thinking that locks us into conservation methods that do not work, methods that seek to simply preserve the already depleted status quo rather than encourage rich biodiversity and dynamism.

“To an extent, we’ve got to abandon the idea that we know best. The thing is this, simply giving nature the space to perform will actually be better for us in a number of ways. It will create more sustainable ecosystems and it will make us find more sustainable ways of feeding ourselves. It will also allow us to re-connect with the natural world, with all the health benefits that come with that. I couldn’t have foreseen the deep psychological impact that being immersed in a rewilding project would have on me. It feels amazing, and should be something that everyone has the chance to experience.”

During the coronavirus crisis, Knepp Estate is continuing to sell their wild range meat via Click and Collect or at their farm shop. Visit their website for more information on ordering.

For more information about rewilding in Britain, visit www.rewildingbritain.org.uk