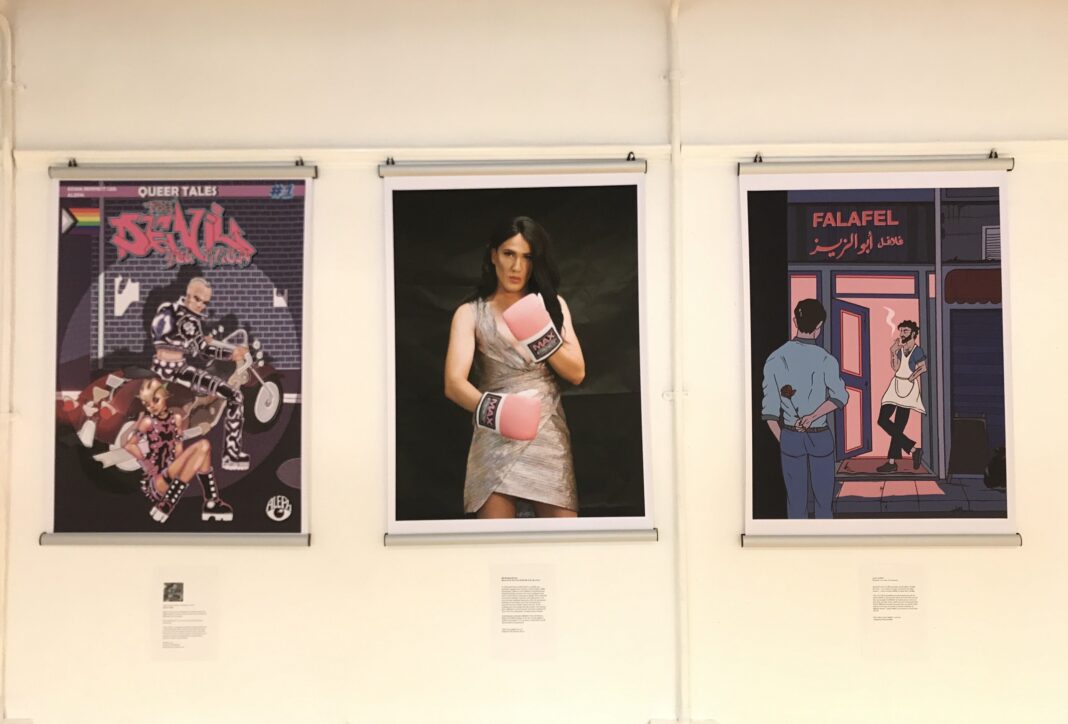 An inspiring exhibition celebrating the 50th anniversary of the Stonewall Riots is gracing the walls of Brighton’s BMECP centre throughout August. ‘RIOT!’ opened its doors to the public during the Brighton & Hove Pride weekend. The exhibition is hosted by SEAS (Socially Engaged Art Salon) and is spread over two floors of the BMECP Centre. The immersive display focuses on the representation of LGBTQ+ colour, trans and non-binary people.

The exhibition showcases the work of approximately 30 artists working in Brighton, other areas of the U.K., and internationally. It brings together fine art, digital art and photography in its celebration of sexuality and diversity.

This Saturday, SEAS will be holding a Community Day at the ‘RIOT!’ exhibition from 3pm until 6pm. The afternoon session is open to all and will feature performances, workshops and artists’ talks. Activities will include Life Drawing and Fanzine making. If you have not been to visit the exhibition already, take a look at some of the wonderful work on display. This exhibition is one not to miss.

A highlight of the show is the work of Brighton-based photographer Manel Ortega, who takes inspiration from the natural beauty of the male form. The artist always experiments with light – this series specifically explores identity and sexuality. A sentence from Ann Bausum’s book ‘Stonewall: Breaking Out in the Fight for Gay Rights’ inspired the portraiture series: “Masquerading in the attire of the opposite sex was a criminal offence, except on Halloween.”

Bruce Rimell’s work explores the ethnographic, queer and psychedelic. ‘Queer Spirit Over Orlando’ is the artist’s personal response to the shooting at Pulse nightclub in Orlando, June 2016. The work seeks healing for the LGBTQ+ community, encouraging others to actively respond to, and speak out against, hate crime.

Stee Louw’s powerful work, ‘Return to Sender’, is a conceptual art-photography piece made in response to the Anti-Homosexuality Bill passed by Uganda’s Parliament in 2013. Louw moved from Zimbabwe to pursue Photography at Brighton City College in 2014, and has remained in Brighton since. The artist’s work brings to light that for many living in former British colonies on the African continent, there is a strong belief that homosexuality was a colonial import.

The artwork of Stambolsky reminds us that in our vulnerability, we are all alike. Stambolsky’s ‘Secret Garden’ series has been metaphorically “weeded” of “labels, social stigmas and stereotypes”, instead depicting subjects in full bloom.

The exhibition encourages visitors to write a note about what they longed to hear in their process of coming out, and how they have now found comfort in themselves. These can be posted anonymously through an in-exhibition postbox, with plans to for the notes to later be collated and made into a zine for LGBTQ+ youth.

Check out a full list of the exhibiting artists here.

Open daily from 11am – 4pm
Free entry and fully accessible.