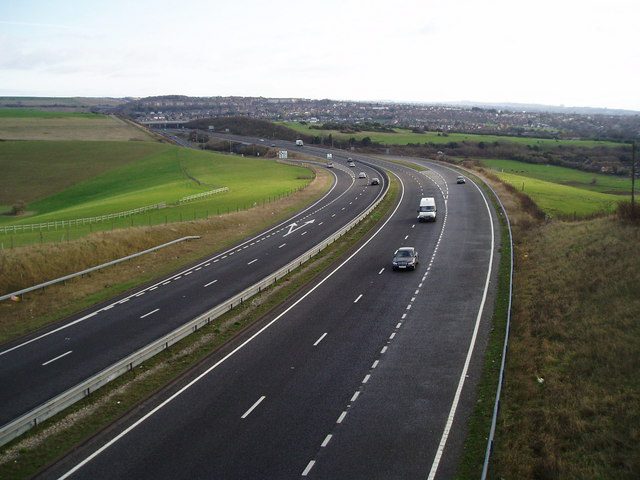 Police are searching for the driver of a white BMW 3-series saloon car after a man was found in a parked car sleeping in the middle of a dual carriageway. When police attempted to wake the driver he sped off, evading police in an 120mph chase before the driver crashed in Hangleton. The man managed to escape the scene on foot.

The crash which included the BMW colliding with hedges and a telephone box may have left the driver injured. Despite possible injury, the man escaped by foot and avoided detection during an extensive police search of the area which included tracker dogs and a drone.

The incident occurred in the early hours of Monday morning at around 2.40am when officers in a marked police car who had been travelling east on the A27 past the Southwick tunnel, sighted a white BMW in the middle of the dual carriageway.

Stopping to investigate the car, the police discovered a suspect asleep behind the wheel who was only awoken when the officers knocked on the window closest to him. The man was startled but decided to immediately vacate the scene at a speeds believed to be in the vicinity of up to 120mph. The patrol followed the suspect but despite flashing blue lights and indicating that the suspect should stop, he maintained his speed before leaving the A27 headed towards Devil’s Dyke.

It was at the junction toward the Dyke the man eventually crashed. The BMW failed to brake continuing over the roundabout at the junction before plummeting over 30 feet into the undergrowth at the side of the road. The suspect abandoned the car and was last seen heading into a nearby woodland on foot. An extensive search couldn’t locate the man, it’s also still unknown if he suffered any injuries.

The suspect was described as a slim white man with short fair hair, wearing a large wristwatch and white coat and probably in his late twenties.

Police are encouraging anyone with any information about the incident or the possible whereabouts or identity of the suspect to email 101@sussex.pnn.police.uk or phone 101, quoting serial 93 of 04/07.