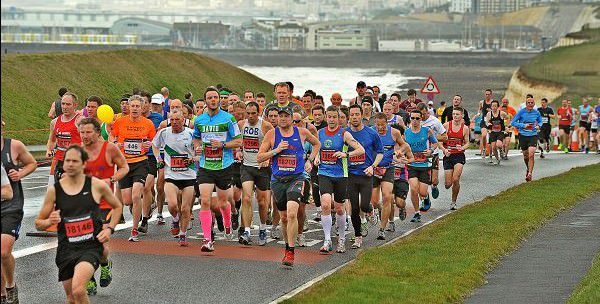 It may all be over within a matter of hours, but long gruelling months of training go into running a marathon and for all their dedication, the runners deserve high levels of support as they put their bodies through pain to raise money for charity and achieve something quite spectacular.

Over 10,000 people are expected to complete the 26.2-mile course on Sunday, with over ten times that amount cheering from the roadside. As well as the Brighton Marathon, there will also be a 10km race and a Mini Mile circuit that takes place in Preston Park, the starting point for all three distances.

The weekend of racing kicks off Saturday morning with the Cancer Research UK Mini Mile, a short race for kids and teens who aren’t old enough to compete in the longer routes. A minimum age of 18 on race day is required to compete in the BM10k and full marathon, that get underway at 8.30am and 9.15am respectively, on Sunday morning.

With money being raised for hundreds of charities, the Brighton Marathon weekend is a fantastic event on the city’s calendar and this year will be the seventh year in a row the fundraiser has been held on the south coast. From the British Heart Foundation to Asthma UK, a variety of charities benefit from the admirable efforts from thousands of runners over the weekend.

Preparation is absolutely vital for completing such a strenuous course and as much as 17 weeks of training can go into preparing someone for the monumental challenge that awaits. Nutrition is also imperative in the lead up, as runners make a number of lifestyle changes to build upon their bodies and get themselves ready for one of the toughest days of their lives.

The main attraction begins at Preston Park, before heading over to Ovingdean and back along the city’s atmospheric seafront as far as Southwick. Runner’s will then turn back on themselves for a final time, as they’re cheered on past some of Brighton’s famous landmarks before crossing the finish line on Madeira Drive.

Thousands of volunteers will also give up their time to aid the successful event, handing out supplements from sports nutrition partner High5, including energy gels, hydration fluids and recovery products throughout race day.

Events like this not only show the potential people have to achieve great things, but also the community’s ability to come together and pull in the same direction for a fantastic cause. Goals will be met, records will be broken and tears will no doubt be shed, but most importantly, money will be raised to have a greater effect on people’s lives that need assistance.

Of course, the race wouldn’t go ahead without the runners, but the public’s supportive role has a significant effect on their performance, as they search for the motivation to cross that finish line and receive their medal for completing one of life’s most physically demanding challenges, the Brighton Marathon.

View the race routes and all other information at http://www.brightonmarathon.co.uk/home

Show your support over the weekend and seek inspiration!