Home Events The Dating Show (with Nina Conti ) coming to Brighton Dome on... 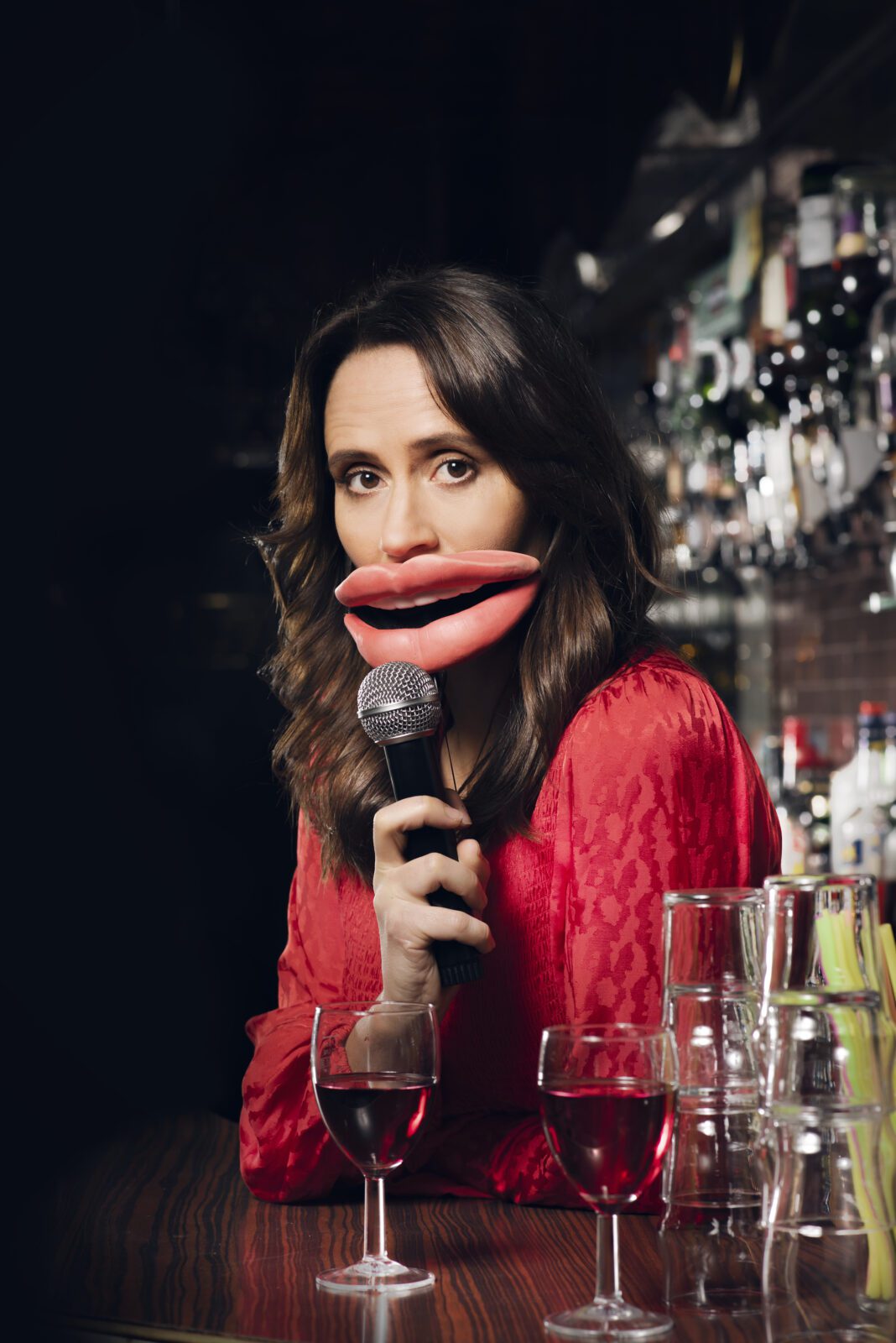 Could there be anything more contemporary than a comedy show with masks which looks to bring people together? That’s what Nina Conti is aiming to achieve with The Dating Show, her new show coming to Brighton Dome on Tuesday 30 November, featuring a gallery of latex masks, a cheeky monkey called Monkey and willing audience members who are up for a laugh and maybe (just maybe) a little bit of romance. WRITTEN BY BRIAN DONALDSON

The idea for this new matchmaking affair came to Nina pretty much by accident during her previous show with masks, In Your Face. “When I did masks before with an audience, I often ended up with love matches. The audience members often took it there with their body language. They could be a bit friendly and a bit flirty, and I remember thinking, ‘I have to stop things going like this or people will think I’m a sex maniac! What’s the matter with me!?’ But then I thought that maybe it’s not me forcing it because it’s simply happening every time, so why resist? And why not do something called The Dating Show?”

Nina had performed a few trial runs of her new work at London’s Soho Theatre just before the pandemic struck, and has spent time while away from the stage considering the best way for The Dating Show to progress. “To avoid it becoming this hetero-normative thing, you want to get everyone involved. In the Soho shows, I opened with Monkey interviewing a bunch of people in the audience, and whoever elicited the most warmth was the person I went with. I’m not after eccentrics, just likeability. Then we got them on stage and put a mask on them, and had a very low-key chat about their past relationships and what they were looking for next. Hopefully those we get up could be any kind of person and not just the Cilla Black demographic.”

For around 20 years now, Nina Conti has pretty much cornered the comedy-circuit market in ventriloquism. For those who haven’t seen her show, this genre might still seem a bit old-fashioned or easy fodder for nightmares thanks to spooky films such as Dead Of Night or Magic where, respectively, Michael Redgrave and Anthony Hopkins went on murderous rampages after being taken over by their ventriloquist dummies. When Nina was first approached by her old mentor Ken Campbell to consider ventriloquism, she was equally as sceptical.

“I’m lucky to have found it, because I never thought that ventriloquism was a skill worth having. I would never have gone to a ventriloquism show, and when it was suggested to me by Ken I was so uninterested in it. I thought he was mad! I don’t know if I’ve enhanced it for nostalgia, but there was a definite lightbulb moment. I had been practising with those awful mannequins, and it was so end-of-the-pier and saucy: I didn’t like it. But then I remembered this monkey puppet that I stole off a mate, and I wondered if his mouth could move; I had to take some stuffing out and put my hand into his face, and then as soon as he started to talk, I thought ‘woah! Everything you’re saying is coming from a wider place than my own head.’ It was a really good feeling.”

From there, Nina has created critically lauded shows and her sidekick Monkey has become quite the cult figure. And still she is a lone vent figure in the modern comedy world, a fact that does surprise her. “I’m delighted to be out on my own, though I have a feeling that there’s one coming . . . I don’t actually think the ventriloquial aspect is my show’s best selling point. It’s a side issue that needs to be overcome given it still has a bad rap. I don’t think people leave my shows thinking, ‘oh that was a good ventriloquist show’. I think you can forget it’s a ventriloquist show; I know I do, to the point where later I think, ‘oh, did I do the ventriloquist bits?’ I can get a bit carried away.”

While there is a lot to love about Nina’s shows, the elaborate masks (which cover the bottom half of a person’s face so that the eyes are on display while Nina adds her voice to proceedings) have added a new dimension to her work. “We’ll probably be working with about 14 masks in total, as they have to fit the shape of the face or have their skin-tone, and be male or female. I have a macabre dungeon of faces hanging off a rack. It might look a bit S&M! I just ordered a bunch of new ones that you can change by adding a moustache or painting the lips differently. The guy I use is a ventriloquist in the Philippines, and his masks are very robust. But they really have to be. It’s awful if they stop working halfway through because if that happens then the magic breaks.”

Having solid and reliable masks solves one potential concern, but the element of risk remains given that Nina is keen to keep the work fresh and to make it as different as possible each and every night. She may have a structure in mind when stepping on stage, but working from a script is a strict no-no. And just to ramp up the risk factor even more, she’s even added a musical element to The Dating Show. “First and foremost, it’s a funny show; I’m not actually trying to match-make. It would be very funny if it actually worked out for anybody. The first time I did Live At The Apollo, I got a couple up and there seemed to be romance in the air, but I suspect they filed out of the theatre their separate ways. But I’m putting songs in. I did an improvathon with the Showstoppers guys, making a song up as we go. I’m really bad at singing, but it’s funny when the date breaks into song. And it turns out that a bad song is better than no song!”

Nina Conti – The Dating Show is at Brighton Dome on Tuesday 30 November at 7.30pm. Tickets available from brightondome.org or by calling 01273 709709.

Nina has won a British Comedy Award for storming ‘Live at the Apollo’, ‘Russell Howard’s Good News, ‘Sunday Night at the Palladium’, and made a BAFTA nominated film – all without even moving her lips.

Nina began her career as an actress at the Royal Shakespeare Company before the genius and anarchic theatre director Ken Campbell inspired her to become a ventriloquist. In 2008 she won the prestigious Barry Award at the Melbourne International Comedy Festival for her solo show ‘Complete and Utter Conti’. In 2010, ‘Talk to the Hand’ had sell-out seasons in Edinburgh, London, Melbourne, the Sydney Opera House and New York.