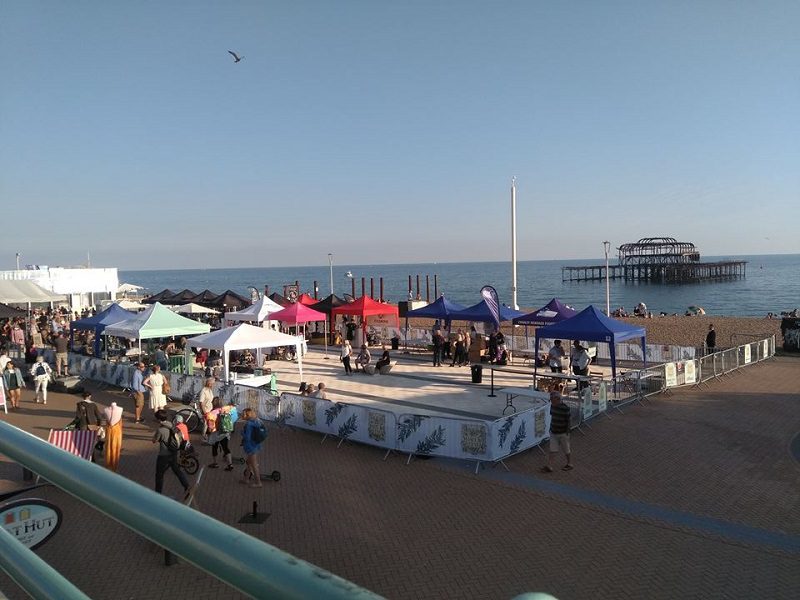 Brighton Journal yesterday headed down to a sunny Brighton seafront for the Sussex Gin Fest 2018!

On this glorious hot and sunny Sunday afternoon in the city, the event was packed with gin lovers and those looking for a ‘gin-troduction’ to the area’s best drinks! 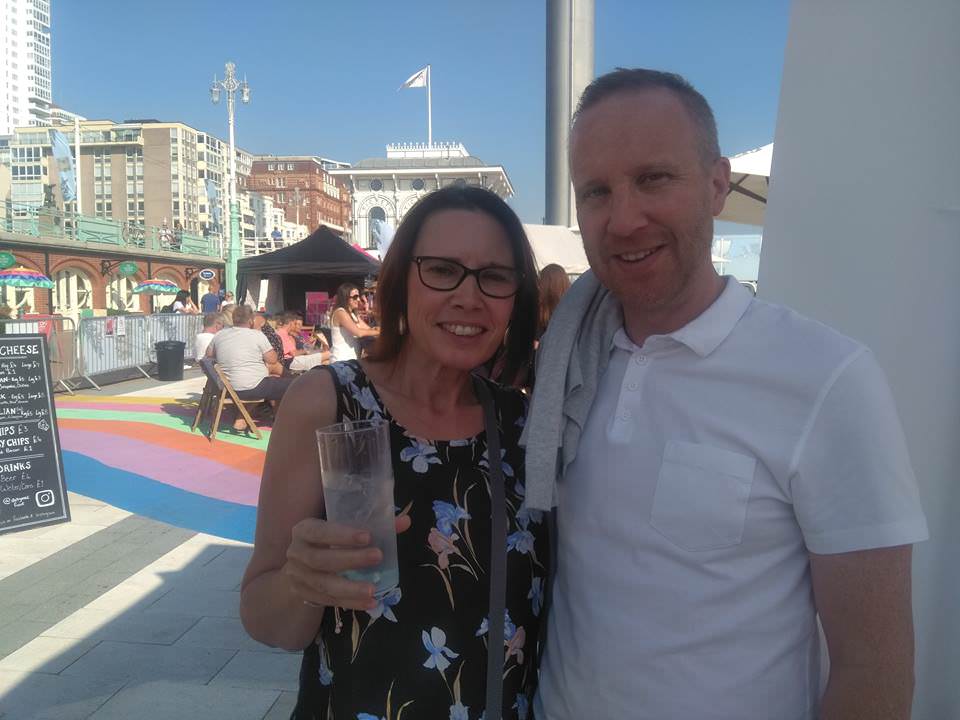 Firstly we met Fay and Richard from Pulborough, who had got the train down to Brighton especially for the Sussex Gin Fest. The couple told us that gin had become their go-to drink, and Richard expressed, “It’s my birthday tomorrow, so it’s like a birthday treat!” Both enjoying an afternoon of trying the great selection of different gins on offer, Richards favourite was the Chichester Habour Gin, and Fay liked the Tom Cat Gin. 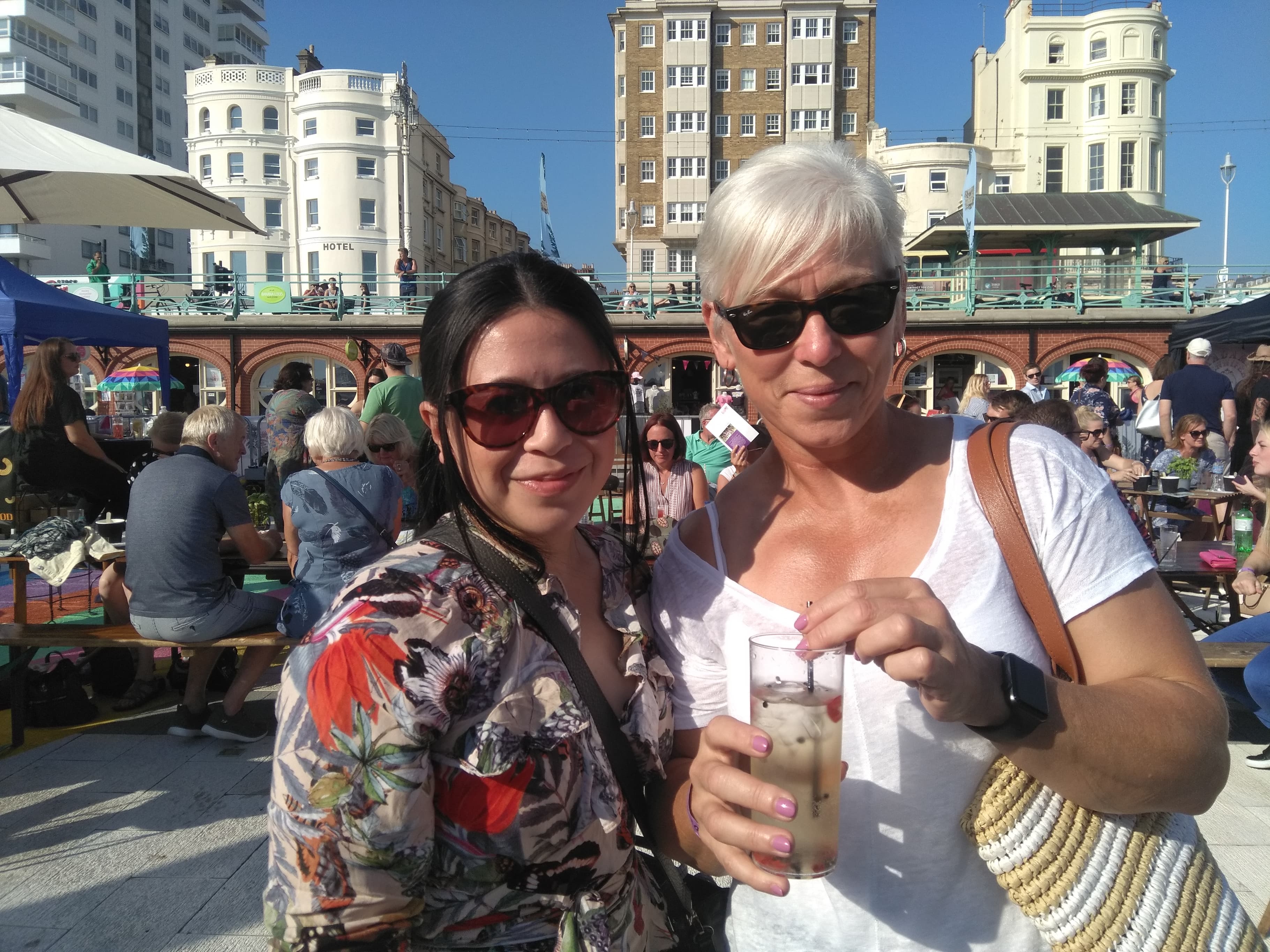 Next we met Megan and Sarah, who are both local to Brighton. Sarah expressed, “Gin has become my favourite drink”, and she told us she was torn between the Harley House Gin and the Slake Gin as her favourite for the day. Megan stated, “I personally like the Tom Cat. I like my sweet gins, I like fruity gins – so that’s probably my favourite!” Sarah was also holding a delightful gin mixed with chilli peppers and served with ginger ale, stating, “It gives you that extra kick at the back of your throat!” 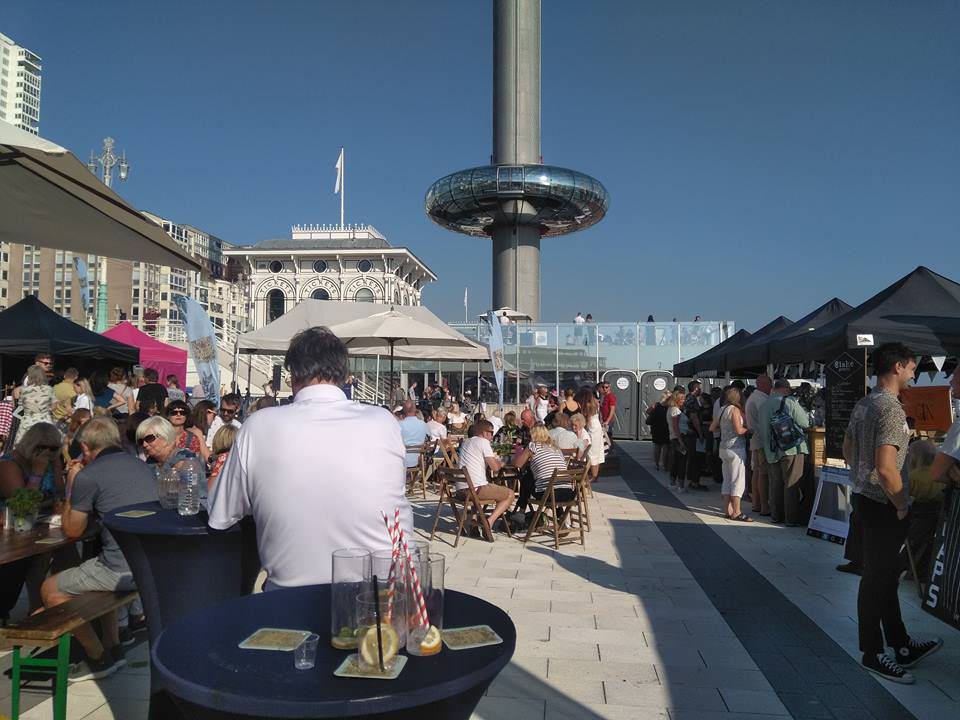 The Sussex Gin Fest took place on Brighton promenade, on the brand new outdoor events terrace directly next to the British Airways i360, which really was the perfect location to enjoy the hot weather, the drinks, the food, and the live entertainment! 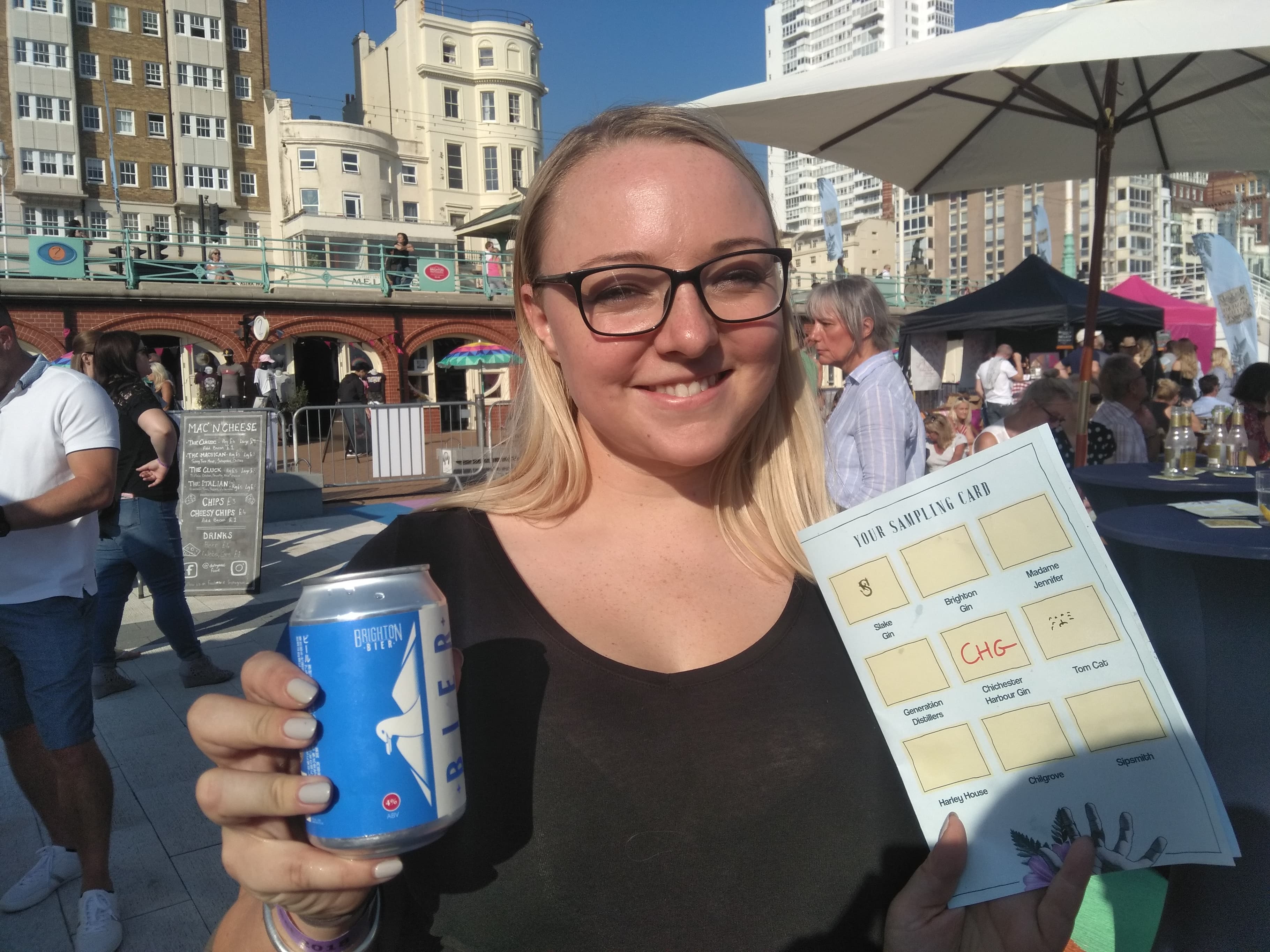 Holding up her sampling card was Gemma, who lives just outside of Brighton, and had come down for the day especially for the Sussex Gin Fest. She stated, “I’m a gin drinker, I like an expresso martini but gin’s up there!”Still with a few more to try, her favourite so far was the Chichester Harbour Gin! 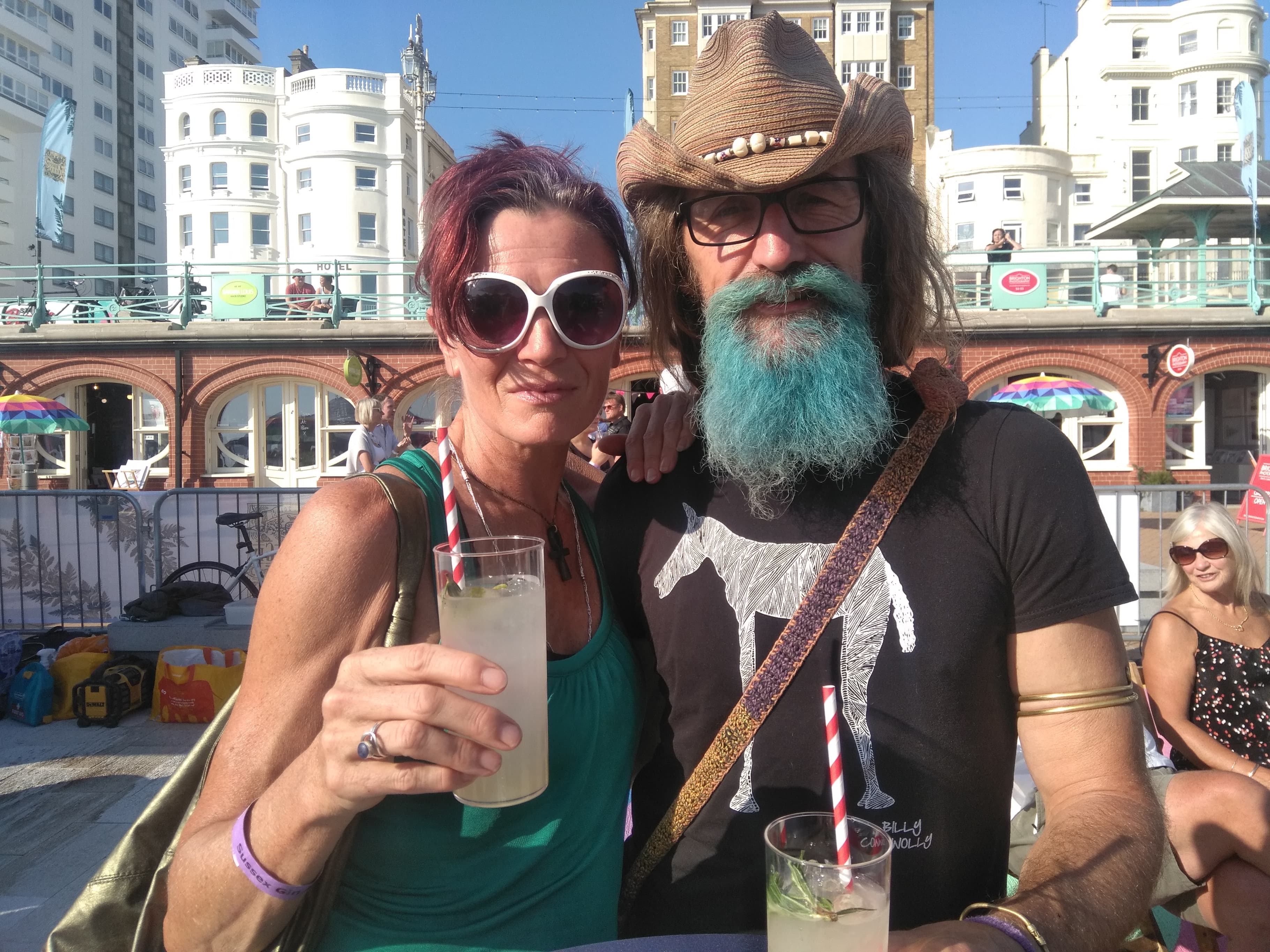 We also had a chat with Nadia and Hayden, both local to Brighton, who both enjoy a G&T in hot weather. Nadia told us her stand out gin for the day was “definitely Madame Jennifer”,  a new urban small batch gin distillery in Poets Corner, Hove, created by biologist & a chemist. They were holding the biologist one, which consists of Madam Jennifer Gin distilled with grapefruit juice and served with an elderflower tonic, which Hayden said, “left a nice little bitter taste!” 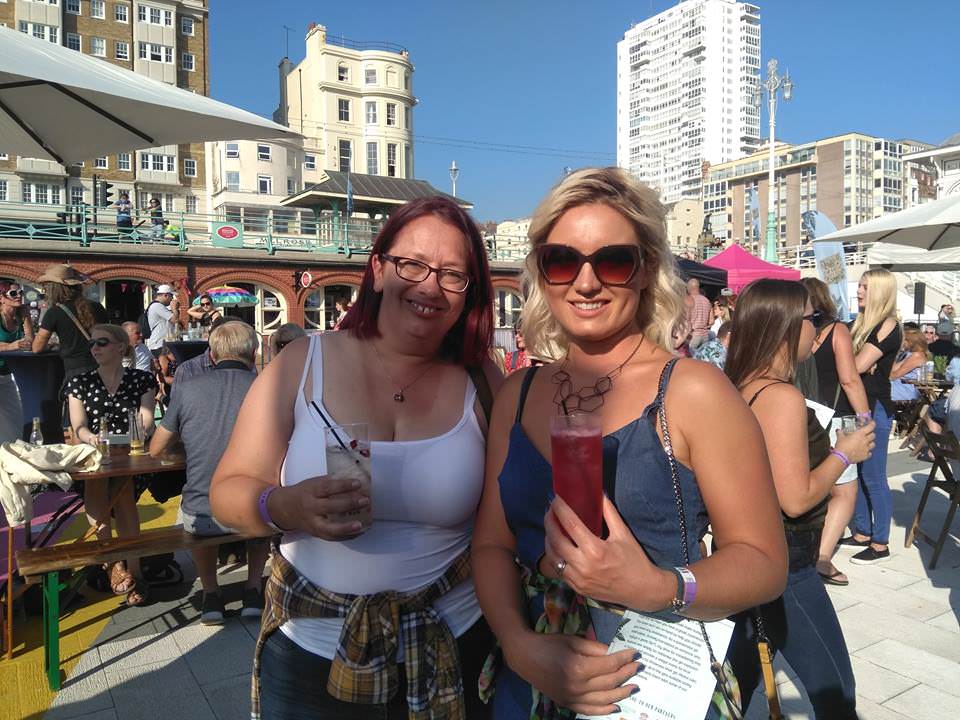 Finally, we chatted to Fran from South Wales, and her sister in law, Bee, from Brighton. Fran, who has liked slow gin for a while, was in Brighton after completing the South Downs Way Hike, a Race for Life event, and expressed, “The gin festival was a lucky coincidenece!” Bee started to get into gin last year telling us, “I’ve never really been into gin at all – I’ve always really avoided it. And then in the late part of last year I tried it and really enjoyed it! I thought maybe I should discover it more because it’s a massive thing in Brighton.”  They told us their favourite gin of the day was also Madam Jennifer, describing it as, “Really gorgeous” and “Just so nice!”