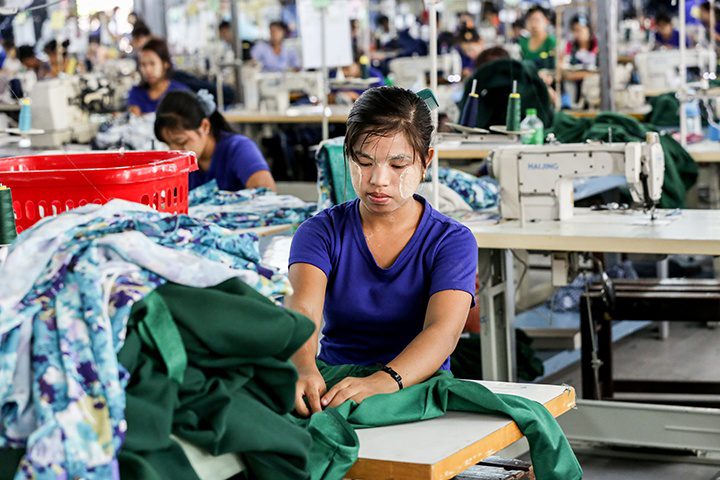 UK retailers have become increasingly known for sourcing from Myanmar factories to supply their clothing. With Myanmar being known as a low-wage country, they’ve become an essential part of the garment industry. It has established factories that have since gained a reputation for being a hot spot for some of the UK’s most popular brands. Their workforce is typically made up of working–class women who produce clothes for stores such as Mango, Zara, Regatta Outdoor, and Primark. Written by Mirabel Adom

Having taken a major hit since the pandemic, many stores have been closed for months. With the ripple effect spiralling across all areas of businesses, garment workers not only lost their jobs, but those still employed are working in an environment with very few safety measures in place. They’re protesting for basic human rights to be enforced in work places.

In their continued effort to improve labour rights for garment workers since 1995, Oxfam joined forces with labour rights groups to tackle unfair treatment within the workforce. Oxfam carried out an investigation in 2015, reporting that workers are “on very low wages, often in dangerous [and] overwhelmingly poor conditions.”

Currently workers are being refused clean drinking water. This suggests that in the past five years, their human rights continue to be violated and it raises the question: “Has anything changed?”.

In early June, news of their treatment resurfaced when Myanmar’s Amber Stone factory, Primark’s suppliers, fired thirty employees, all of whom represented their colleagues as union leaders – the response to their request for clean drinking water lead to being dismissed. Images of injured workers also emerged; they were badly beaten, bloody, and covered in bruises for making the same request. Their dismissals came days after they formed a union. This was done in a bid to challenge their bosses and their decision that workers were being fired simply due to a lower demand for production during the pandemic.

Across many factories, workers have observed that union members have been targeted at a disproportionate rate for dismissals. A former union president, Kyaw Thu Zaw, from Rui-Ning factory commented, “I see the firing as clearly union-busting under the pretext of the pandemic. The factory fired most of the union members, including myself,”.

Dihuali factory workers, responsible for Mango’s clothing line also held protests to demand clean drinking water. They called for a review of the unfair treatment, such as access to toilets and implementing better safety precautions.

Primark have responded to these allegations. They commented that they are investigating this breach of conduct and are working with Huabo Times factory to resolve any concerns. In June, Mango released a statement confirming that all parties have come to a resolution, however in a recent protest in September, seven-hundred former employees, now fired, and who were also union members stood outside of Dihuali factory, continuing to demand clean water and fair treatment. They held a large banner, “MANGO: WE WON’T BE LEFT BEHIND.”

During a strike in Myanmar in 2012, garment workers fought for an increase in minimum wage, and although garment manufacturers refused this, masses of companies across the UK and internationally, argued in favour of the workers – the new wage was introduced in 2015 . This intervention proved to be successful, and once again companies who are voicing their opinion on this matter of clean drinking water and other human rights violations is the key to bringing change.