Movie-lovers heading to the flicks last Saturday (18 March) were in for a shock when they discovered staff protesting outside the Duke of York’s Picturehouse at Preston Circus.

The front of house team were demanding the local living wage, as calculated each year in relation to the cost of living. It’s an issue which they have been in dispute about for some time; support for the strike vote was unanimous on a 75% turnout amongst members.

Although the Duke of York’s may look small and charming, it is actually part of the huge Cineworld chain – the second largest cinema operator in Europe with 2,049 screens across 221 sites in nine countries. The cinema giant allegedly makes more than £83 million in post-tax profit annually. 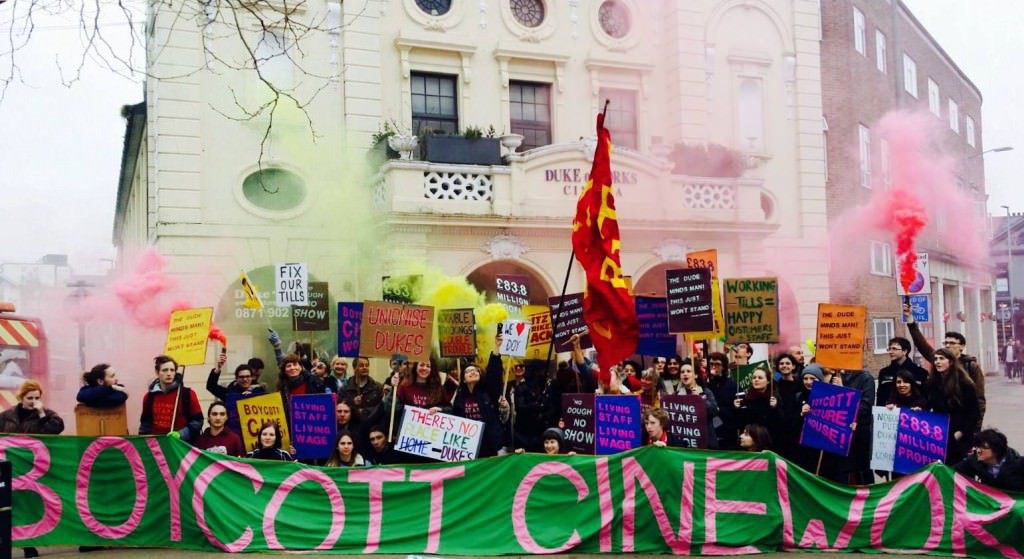 The current rate of pay for staff at the Duke of Yorks starts at £8.18 an hour – almost £1 less than for London-based employees. Staff would like to see a rate of at least £8.45, enabling them to keep up with the growing cost of living in Brighton and Hove.

“Without the living wage, it’s really hard for us to be able to afford any of this stuff. And we are all on zero contracts so there is no guarantee of work.”

In addition to the local living wage, staff are demanding upgrades to the tills and internet as well as better sick pay, maternity pay, and paternity pay. They also want their chosen union, BECTU, to be recognised, as the only current option is a company-run forum.

Brighton Pavilion MP Caroline Lucas came along and showed her support for the cause on Saturday.

And of course now it’s TODAY! Pls join @UnioniseDukes at 1pm in support of Living Wage & an independent union – see you there! #Brighton https://t.co/NRHX6ArX1R

Commenting on the Duke of York’s vote, Willy Donaghy, assistant national secretary at BECTU, said: “We congratulate our members in Brighton. They’ve demonstrated that the Living Wage campaign is not just an issue for workers in London but connects with workers beyond the capital where the struggle to make ends meet is just as intense.”