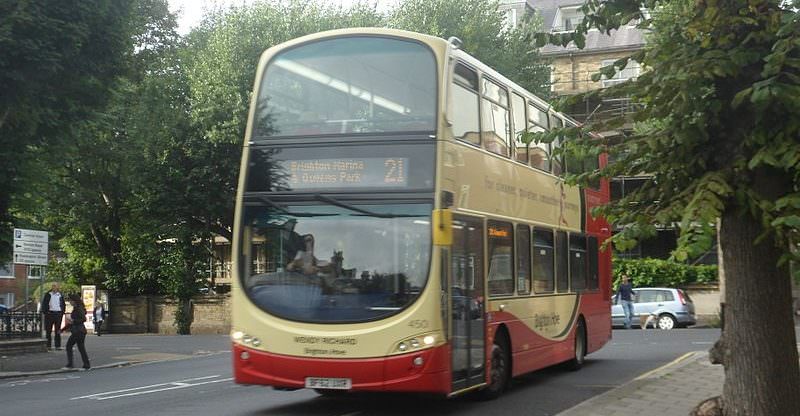 Brighton & Hove City Council has committed £15,000 of funding to Brighton & Hove Buses to ensure bus journeys on the 21 and 21A bus routes can continue.

Brighton & Hove Buses were due to withdraw four evening journeys from Whitehawk/Wilson Avenue section of the 21A route from 17 September.

They were also set to withdraw the first 21 bus which starts at 6am on Saturdays and travels from Whitehawk to Brighton Station via Wilson Avenue, Manor Hill and Queens Park. This would have meant the next bus was due 75 minutes later at 7:14am.

The loss of both of these journeys would have had a negative impact on the public and the local community.

The lack of the 21A evening journey to Wilson Avenue would have severed links with the Stanley Deason Leisure centre and Greater Brighton Metropolitan College, and the early morning Saturday number 21 bus service, which travels to Brighton station, supports southern train travel and access to employment.

Chair of the Environment, Transport and Sustainability Committee, Councillor Gill Mitchell on this said:

“These are key bus routes which serve the community in East Brighton. We took the decision to fund their continuation so that residents in the area, who require flexible travel times, would be able to access the services they need.”

She added, “We will continue to work with local bus companies to ensure a joined up approach is taken so that residents across the city have access to key routes on the network.”

News of this approved £15,000 funding from Brighton and Hove Council means that Brighton & Hove Buses will continue to run the full 21A route on the evening journeys, with a similar timetable to now, and will see the Big Lemon bus company in future run the number 21 6am bus journey on Saturday mornings.

The decision means that there won’t be a break in bus services or less services offered by the bus company, and that the soon to be published Autumn/Winter bus times will contain the aforementioned bus journey’s, accurately reflecting the continuation of the bus services.

Brighton & Hove Buses Managing Director Martin Harris, referring to November 2015 when Council funding was cut and it was first proposed that many services including the 21 and 21A could become less frequent, on these journeys stated:

“We’ve run these journeys since 2015 when the council stopped being able to fund them because of the significant financial pressure it was under.

Harris added, “We had no expectations that the council would be able to fund these journeys when we took this decision – we know that times are very tough for local councils’ right around the country – but we completely understand why they have.

On the importance of this new £15,000 funding, Harris said: “The council’s decision allows time for us to work together on a better value for money solution to providing for the East Brighton journeys the council has stepped in to cover.

He added, “It’s worth noting that we have increased bus mileage every year for the last five years and invested heavily in services to East Brighton. These journey reductions are rare.”

In addition to this news, the council has also approved plans for a new bus shelter on the 21A bus route which will be installed opposite Stanley Deason Leisure Centre on Wilson Avenue, for passengers travelling towards Queens Park, Elm Grove, London Road Shops and the city centre.