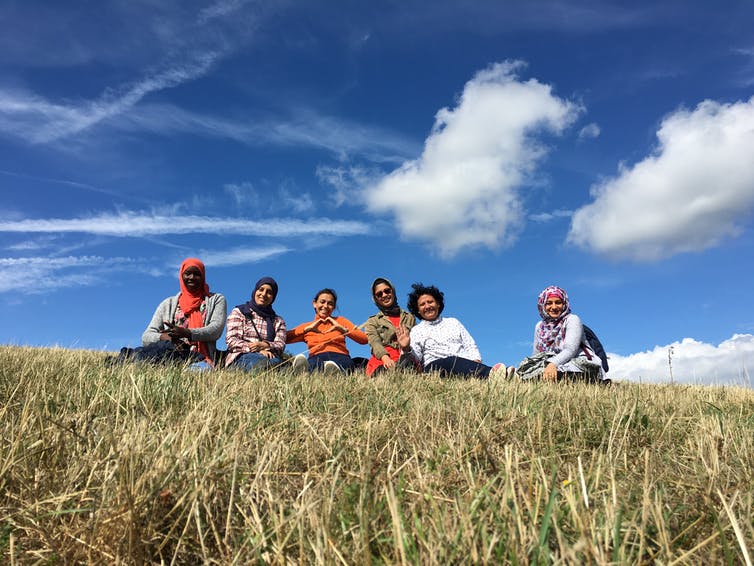 More of us than ever are stuck indoors, whether we are working at home, self-isolating, or socially distancing from other households. Long periods of isolation are already impacting many people’s mental health and will continue to do so.

On the other hand, people have reported discovering outdoor spaces on their doorstep as they are forced to stay local. Many say they have felt happier for doing so.

This reinforces the surge of research exploring the psychological benefits of connecting to nature that has developed in recent years. The idea is also growing that encouraging time in and engagement with nature has enormous potential in terms of mental health and wellbeing.

There are more and more programmes explicitly aimed at helping people with experiences of distress by providing structured contact with nature. These are variously referred to as nature-based interventions, ecotherapy or green care. A growing evidence base suggests they are effective in alleviating distress and fostering recovery and resilience – for people but also, at least potentially, for nature too.

I think programmes like this need to be rolled out en masse, with a few vital provisos.

My work often involves evaluating nature-based interventions from a psychological perspective. I have repeatedly witnessed the benefits of time spent in nature for those involved.

One organisation I work with, called Grow, takes small groups of six to eight people – often strangers at first – into nature. Participants all suffer, or have suffered, from debilitating forms of psychological distress and are recruited on that basis. Like many such services, Grow operates with funding from sources like the National Lottery, larger charities and local council grants to run a number of programmes a year.

Clients are not yet referred through or commissioned by the health service. Your doctor might be more likely today to suggest you get outside more in a move towards green prescriptions. But institutionalised health provision is still catching up with the evidence of the benefits of structured, supported and sustained contact with nature.

Colleagues and I have collected surveys, diaries and interview data about the project over a number of years. Our findings reveal how transformative the experience has been for participants. (I was so impressed I later became a trustee of the charitable organisation involved.) We found plenty of evidence of the psychological benefits of nature connection, but also, vitally, something else – a deepening of social connectedness.

For people struggling emotionally, socially or psychologically, just being in nature seems to rekindle their ability to relate to and engage with others. Feeling present and “held” by the natural environment can nurture new and positive forms of social contact, which in turn enhances experiences of nature.

So for me, while there are always important caveats (such as the need for on-hand trained professional support), the benefits of a range of nature-based projects are unequivocal. They can be used as therapeutic interventions for people struggling to cope. They also work preventatively, by helping to maintain a sense of wellbeing, happiness, awe and belonging.

The impact of coronavirus-induced isolation on mental health is already mirrored in rising psychiatric diagnoses. And so the need for these kinds of interventions has never been greater. It is not enough to just encourage people outdoors. For many, access to nature is practically difficult. For others, it is an alien concept.

There are projects like Grow across the world and they are chronically underfunded. We need more of them. We need our governments to be funding projects like this as a matter of urgency, rolling them out on a national scale. Doctors, nurses and other primary care professionals should be able to refer people to local green care services as part of a wider shift towards “social prescribing”.

This is not only a psychological issue. Access to nature is not equal. The richest 20% of areas in England offer access to five times the amount of green space as the most deprived 10%.

If nature is so fundamental to our wellbeing, it should be understood as a right rather than a luxury. This is why diverse organisations such as walkers’ rights group the Ramblers and the mental health charity MIND are increasingly calling for legally binding targets that guarantee people’s access to nature. This should be part of a radical shake up of health and care policy.

We also cannot ignore the fact that nature is in retreat, decimated as ecological devastation is wrought across the globe. In this context, contact with nature might seem futile, contradictory even. There is arguably something perverse about asking nature to make us well at the same time as we are destroying it.

But the movement is evolving rapidly. One of the most promising developments I’ve seen is the growth of “reciprocal restoration” projects – interventions explicitly designed to combine restoring people with restoring natural environments.

The potential for more collective forms of green care, such as the mass mobilisation of volunteers, is well worth exploring. Evidence also suggests that the more access to nature we have, the more we come to care for and want to defend the natural world.

There are already signs that we are at last more willing to face up to the realities of ecological crisis – if the shift in nature documentaries, the rise of Extinction Rebellion and the growing youth climate movement are anything to go by.

So perhaps it’s possible that an ambitious push for nature-based interventions might further encourage a groundswell of action that is truly restorative – of both humans and nature.

Mental illness and substance use: the two often go hand in hand so why is it so difficult to get help?

Carbon offsetting programmes have become increasingly popular but what does it mean to carbon offset?