The purpose of the meeting was to give renters the opportunity to discuss the issues facing them, and to come up with a list of minimum standards for rented accommodation to present to Brighton Council. The hope is that the council will incorporate these minimum standards into their new ‘Good Landlords Scheme’, which has drawn criticism from Acorn for so far ignoring the voices of renters.

The meeting began with a discussion of the state of renting in Brighton, where attendees were invited to share their experiences of dealing with rogue landlords and unreliable letting agents. One young woman described falling through her flat’s balcony and getting seriously injured, having not been warned by the letting agent that it was unsafe. Another woman spoke about the discrimination she had faced from landlords not willing to accept tenants who receive some housing benefit, despite the fact she works part-time while juggling looking after her young daughter.

More generally, most people in the room seemed to have experienced difficulty in getting agents to carry out repairs on properties, safety issues, discrimination based on gender, financial situation or nationality and threats of eviction, not to mention the shockingly high rents that have seen Brighton become the most expensive city outside London to rent in the UK. 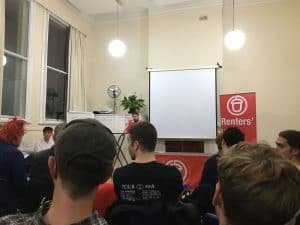 Brighton renters turned out in force to discuss the issues facing them.

What should be done?

Following this, the meeting split into small focus groups in order to discuss what could be included in the list of minimum standards.

In terms of the cost of renting, it was decided that the council should define ‘affordable rent’ as 30% of the salary of someone paid the Brighton living wage, which currently stands at £8.75 per hour, rather than 30% of the average local salary which stands at £33,697. Members suggested that this would be a fairer definition of ‘affordable rent’, as renters in Brighton are likely to earn less than property owners.

Furthermore, it was suggested that rent in Brighton could be set in relation to the Local Housing Allowance, which currently stands at £630.44 per month for a one bedroom property. Members thought it would be a good idea for the LHA rate to be used as a guideline for what is considered affordable rent in the city.

Finally, it was decided the organisation should demand that rent increases should be limited to the rate of inflation at the very least, and that they should continue to campaign to bring rents in the city down.

On the issue of safety and repairs, members wanted to demand that structures were put in place by the council to ensure tenants are able to hold landlords and agents to account for failing to carry out repairs. It was suggested that there should be a legal time-frame in which landlords were obliged to organise repairs once notified by the tenants.

Additionally, members wanted to pressure the council to force agents to be transparent regarding who tenants should contact regarding repairs. It was felt that this would help end the confusion that lots of people at the meeting had encountered when attempting to find out who exactly is responsible for their home and how to contact them. Ensuring that tenants hold one contact number and one address for the person responsible for their property is vital, members suggested.

Finally, renters spoke passionately about their desire to pressure Brighton Council to end its affiliation via the Good Landlords Scheme with the company iHowz, formerly the Southern Landlords’ Association, who offer to issue controversial Section 21 evictions on behalf of landlords for a budget fee of £90.

You can find out more about Brighton Council’s Good Landlord Scheme here.

Acorn is a community renters’ union and organising group founded in Bristol in 2015. It has since expanded across the country and now has over 2,000 members. Since coming to Brighton in early 2018, it has helped renters in the city recoup £70,000 in compensation and deposit returns. You can find out more about the union’s work and how to join via their website.