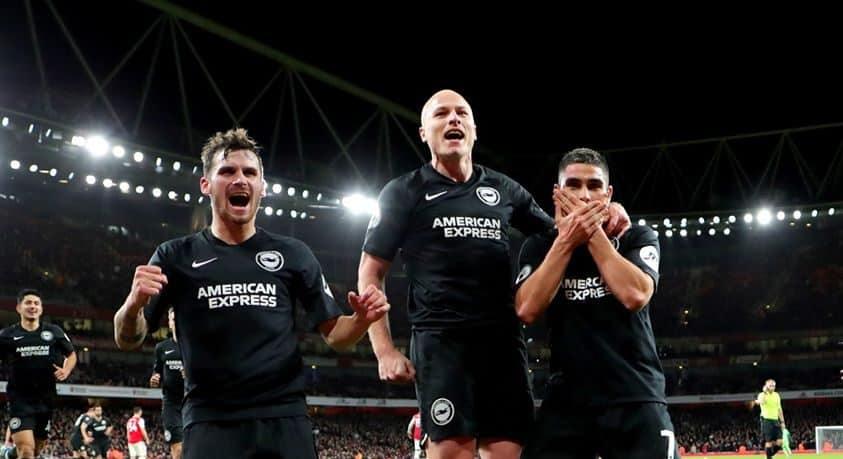 Brighton and Hove Albion secured a first ever away win against Arsenal last night, seeing them rise to 13th place in the Premier League table after 15 games.

The Seagulls were the much better side in the first-half, and their dominance was rewarded in the 36th minute when Adam Webster smashed home from close range after Arsenal had failed to clear a corner.

Alexandre Lacazette headed his side level early in the second-half, and shortly after there was frustration for Arsenal when David Luiz thought he had made it 2-1 with a volley, only for it to be correctly ruled out following a VAR check for offside.

After watching his side defend resolutely for much of the second-half, Brighton manager Graham Potter produced a masterstroke late in the game, sending on Leandro Trossard for the final 10 minutes. The Belgian helped create the winner with his first touch of the game, finding Mooy on the left whose cross was met by a perfectly timed glancing header from Maupay.

It’s a nice moment for us. It gives us a little bit of belief. It was a good game for us, not perfect but we showed real courage and belief.

Credit to our players, they did what I think an away team has to do in terms of frustrating but it still takes courage from the players and that’s what I’m pleased with.

We dug in, I’m very pleased.

Next up for Brighton in the Premier League is Wolves, who they face at the Amex Stadium this Sunday at 16:30.

Albion left waiting for safety after draw at Southampton