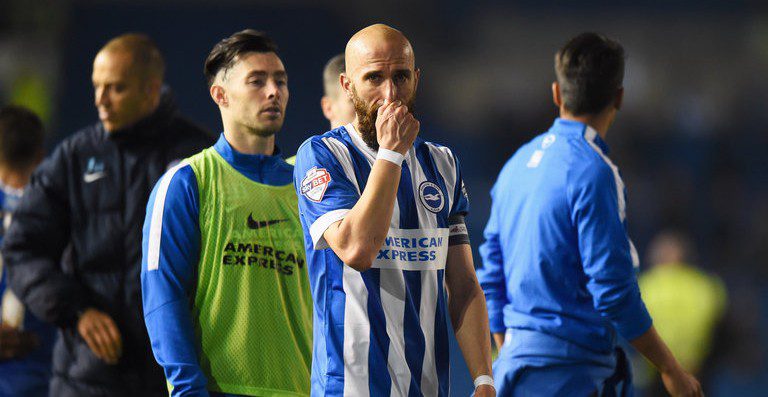 Football can be cruel, very cruel, a dealer of ecstasy with a dark shadow of disappointment. Good things supposedly come to those who wait, but for Brighton & Hove Albion, the eventual reward is proving a painful journey with no promises.

After a stunning turnaround, which saw the Seagulls rise from the ashes of relegation roulette to the fruitful chance of hitting the Championship jackpot, it all ended in tears, as Sheffield Wednesday checked out of the Amex Stadium and booked their place at Wembley.

As referee Roger East blew the full-time whistle on Monday night, puddles of blue and white were scattered across the Amex grass, as Albion’s unrewarded heroes fell to the floor in utter disbelief and pain.

Albion’s final-day heartbreak at Middlesbrough was tough, but the dream wasn’t over. Sadly, now it is.

Wednesday, who trailed Albion by 15 points come the end of the season, are now within 90 minutes of Premier League football. But for Albion, over 4,000 minutes stand in their way, with 23 stations and 46 stops on route. Good things come to those who wait? The express train sounds a lot more appealing.

Having lost to Crystal Palace and Derby County at the same stage in two of the previous three seasons, heartbreak was nothing new for Albion. Losing to the club’s bitter rivals, Palace, was arguably the most pride-damaging blow in recent years, but Monday’s failure was harder to accept.

Why? Because Albion gave more than they’d ever given. A late rally made Gus Poyet’s team favourable to win the play-offs in 2013, but was promotion unfairly ripped away from them? Not at all. Albion deserved their chance of getting to Wembley, nothing more, nothing less.

Under Oscar Garcia, Albion scraped into the play-offs on the final day of the season, but were convincingly beaten by Derby over two legs. Once again, reaching the play-offs was a present, but Albion had no argument to claim the prize.

A season of misery then played out on the south coast, as Sami Hyypia guided Albion into the relegation zone, only for Chris Hughton to rescue the Seagulls from the drop, which would have been a devastating blow for a club building a brighter future off the pitch.

A tremendous summer of recruitment followed, but by no means were Albion dreaming of the Premier League with last season’s failure far from being a distant memory. However, as the months passed, it gradually became clear that Hughton had not only saved a sinking ship, in fact, he was guided it towards the promised land.

Like Leicester City, who miraculously turned the league table on its head and won the Premier League crown, Albion were supposedly punching above their weight but showed the character of a heavyweight on the pitch and suffered little. In fact, the Seagulls lost only five games over the 46-game league season, a tally that carried promotion for over 100 years, but not this time around.

It proved the final round in which Albion would receive the biggest shot, but what went on after the bell was in fact the lethal blows that unfairly put them on the canvas without recovery.

With the Riverside Stadium silenced, following Dale Stephens’ back-post header, Albion had the momentum to go on and win the game. But from a circle of red shirts rose a matching colour card, which un-claustrophobically began yellow and after pressure from Middlesbrough players, Mike Dean punctured Albion’s restored hope and wounded their Premier League dream.

Despite their majestic efforts to win against the odds, the ten yellow shirts that remained on the pitch soon disappeared amongst a sea of red, as Middlesbrough fans flooded out of the stands to celebrate their promotion to England’s top flight.

A sense of injustice was felt throughout the week that led into Albion’s Friday night clash with Sheffield Wednesday at Hillsborough, with the FA rejecting the club’s appeal against Stephens’ sending-off, but that was to prove only the start of things to come as a mind-boggling night in Yorkshire unravelled.

Albion escaped another portion of bad luck early on against Carlos Carvalhal’s side, with Fernando Forestieri’s goal eventually being ruled out for offside, despite initially being given as a goal by referee Andre Marriner.

But the gods were determined to have their way, with four key players leaving the field injured for Albion, leaving them with ten men for the third consecutive game. Hughton had never managed a game with such misfortune and amazingly Albion were somewhat thankful for the 2-0 defeat they escaped with, ahead of Monday’s all-or-nothing clash at the Amex.

What was to unfold in the first half of the second leg was something quite spectacular, but once again, Albion went without reward. Arguably the best performance of the season saw Hughton’s men go in at half-time level at 1-1 and if there was any point throughout the season to accept Albion were cursed, this was certainly it.

A league-leading 17 shots were recorded by Albion in the first half, hitting the post and having numerous efforts inches short, wide and high of dragging them back into the contest. The atmosphere inside the ground was special and the performance on the pitch was equally as eye-catching. Sheffield Wednesday were shaken and if Albion were going to lose out, it was obvious they’d go down fighting and with unquestionable passion.

Lewis Dunk’s goal sparked euphoric scenes and the belief that Albion were going to turn things around, just like they had done over the previous 12 months, was in full flow. Wednesday’s goal had been unlocked and more punishment seemed inevitable, but Albion’s bad luck hadn’t checked out and following Gary Hooper’s push on Dunk, that went unpunished, the two-goal deficit was reimbursed.

So that’s Stephens’ red card, a rejected appeal, four injuries in one game and an equalising goal that shouldn’t have stood. Despite their monumental efforts, it was obvious, it just wasn’t meant to be.

Albion had given everything they had in the opening 45 minutes and somehow only had one goal to show for it. Take nothing away from Sheffield Wednesday, they defended for their lives and did everything they could to frustrate their opponents. But on any other day, any other game and any other season, the remarkable first-half performance that Albion produced surely would have blown them away.

When you think of passion, pride and loyalty, a football supporter is what comes to mind. The people that pay to watch football, not play it. But for Albion’s players, who are paid to pull on the blue and white shirt, the same level of commitment towards the club shone like never before on a heart-breaking night that offered so much more.

For once, perhaps the hurt and pain was actually felt more by the warriors on the pitch, and not the loyal support that bleed blue and white. As Bruno, Liam Rosenior and co. fell to the floor with emotional agony, the volume rose from the stands as the club’s supporters stood with pride and thankfulness towards the fallen heroes that gave their all.

The disappointment was clear to see, but the pride inside the Amex stadium was bolder in the wake of defeat. Albion may have ended the season without reward, but take nothing away from a wonderful season that brought the entire football club ‘together’. The disappointment may last for weeks, but the feeling of pride will unconditionally last forever.