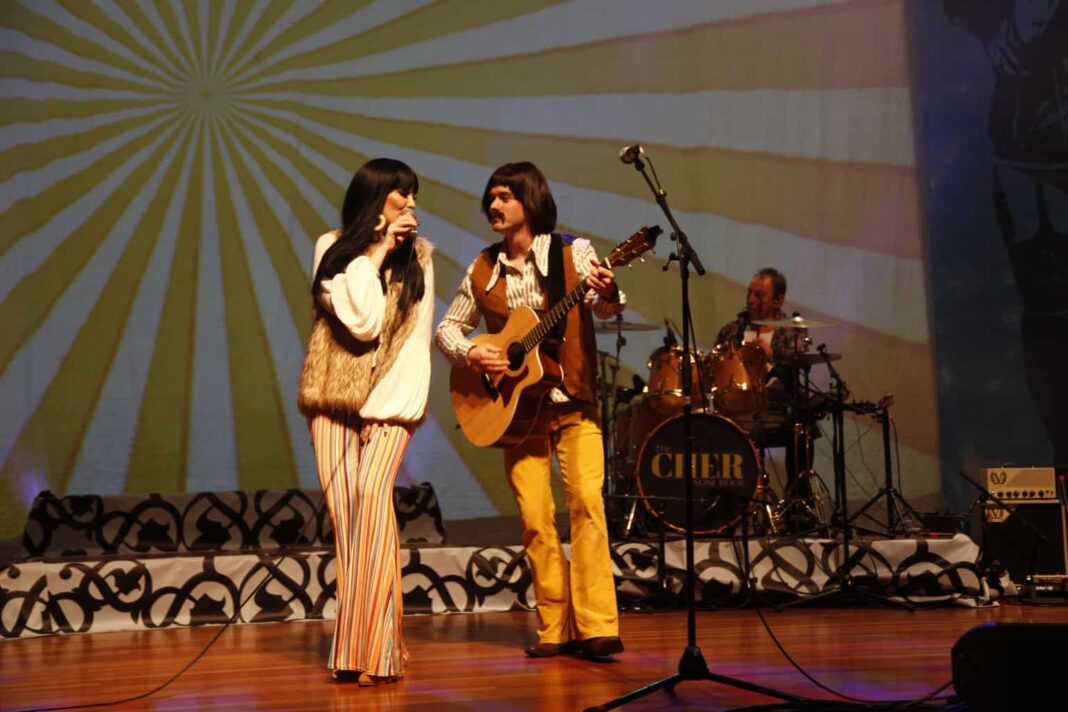 It wasn’t your usual Sunday night entertainment, even for the city where merriment can be found anywhere at any time, but then ‘Tis the season. It is the season for song, for theatre, for panto, for Christmas jumpers and mulled wine.

And last night, Brighton Journal (plus one) managed to sample all of the above. The best Cher tribute act in the country, Believe, touched down for one night only at the Theatre Royal, and didn’t disappoint.

The backing band were already out strutting their stuff, framed by floor to ceiling emblems of their star vocalist, when the unmistakable silhouettes of make-believe Sonny Bono and as close as you’ll get Cherilyn Sarkisian entered.

They launched into the gentle sway of I Got You Babe, everyone in the house attempting a singalong and invested from the beginning. Sonny stayed on for another few numbers – the duo’s harmonies and chemistry was perfectly realistic – even the height disparity which I always picture the real life couple having was there thanks to Cher’s oversized heels.

Elaborate costume, which spanned six decades, was as integral as the music. The 60s and 70s were epitomised by diverse outfits portraying hippies, indigenous peoples and hairspray rockers, which is testament to the ever-changing, chameleon quality of the superstar herself. In the first half of the show came mid-career favourites: Beat Goes On, You Don’t Have To Say You Love Me, Heart of Stone and Just Like Jesse James.

Thrown into the mix was my personal highlight – Gypsies, Tramps and Thieves (did Cher ever write a better opening line than ‘I was born in the wagon of a travellin’ show, my mama used to dance for the money they’d throw?’) and the curtain came down for halftime on the familiar warmth of If I Could Turn Back Time. All of which was handled with aplomb by the charming lead vocalist, so much so that the throng of glittery fans were already on their feet and belting the words back to her before the lights came up for the interval.

We came back for the second half having closed the book on the 80s and off into the 90s we pushed; mulled wine now replaced by that other yuletide favourite, Baileys. The laid back hippy vibes now long gone, we buckled up for a journey of full on rock chick (daring leathers and suspenders shaped stand out covers of Walking in Memphis and Bang Bang) and for the delightful bop of The Shoop Shoop Song we were pulled back to a sweet and innocent pastiche of the early 60s.

Before the end, we were of course catapulted to our school disco days for the unforgettable hit for which the show takes its name. The crowd tried to hold every note of heavenly chart topper Believe but couldn’t keep up with the act on stage.

Next came the unfortunate cousin, Strong Enough, which although successful at the time (number 5 in 1999) hasn’t lasted the test of time in the way that Believe has. Not to worry, this band know how to entertain and they were not going to leave us hanging there; the Cher fanatics will be well aware that she has taken her penchant for covering other people’s hits to new heights in recent years.

The California-born solo singer has a kinship with Sweden’s most famous pop stars Abba, having starred in the squeal to the rom-com box office hit Mamma Mia. So, it was only right that the third and final act of the performance was a medley of Abba hits which ranged from the gorgeous Fernando through to the well worn title track.

Although ‘Tis the season, I wasn’t totally in-tune with the Abba covers – probably because it was a moody, December Sunday – but that didn’t detract from the utterly convincing take on Cher’s biggest hits. Even for a fair weather fan, you’d be surprised at how much of her back catalogue you know and can sing along with. I’d go back just for Gypsies, Tramps and Thieves…

The gang are heading to Ireland for their closing shows of 2019 but I have been told they hope to return to Brighton soon.

Believe, The Cher Songbook, is produced by MRC Presents. All information can be found here.

We were guests of our friends ATG and Theatre Royal. Check our what else they have to offer in the coming weeks here.