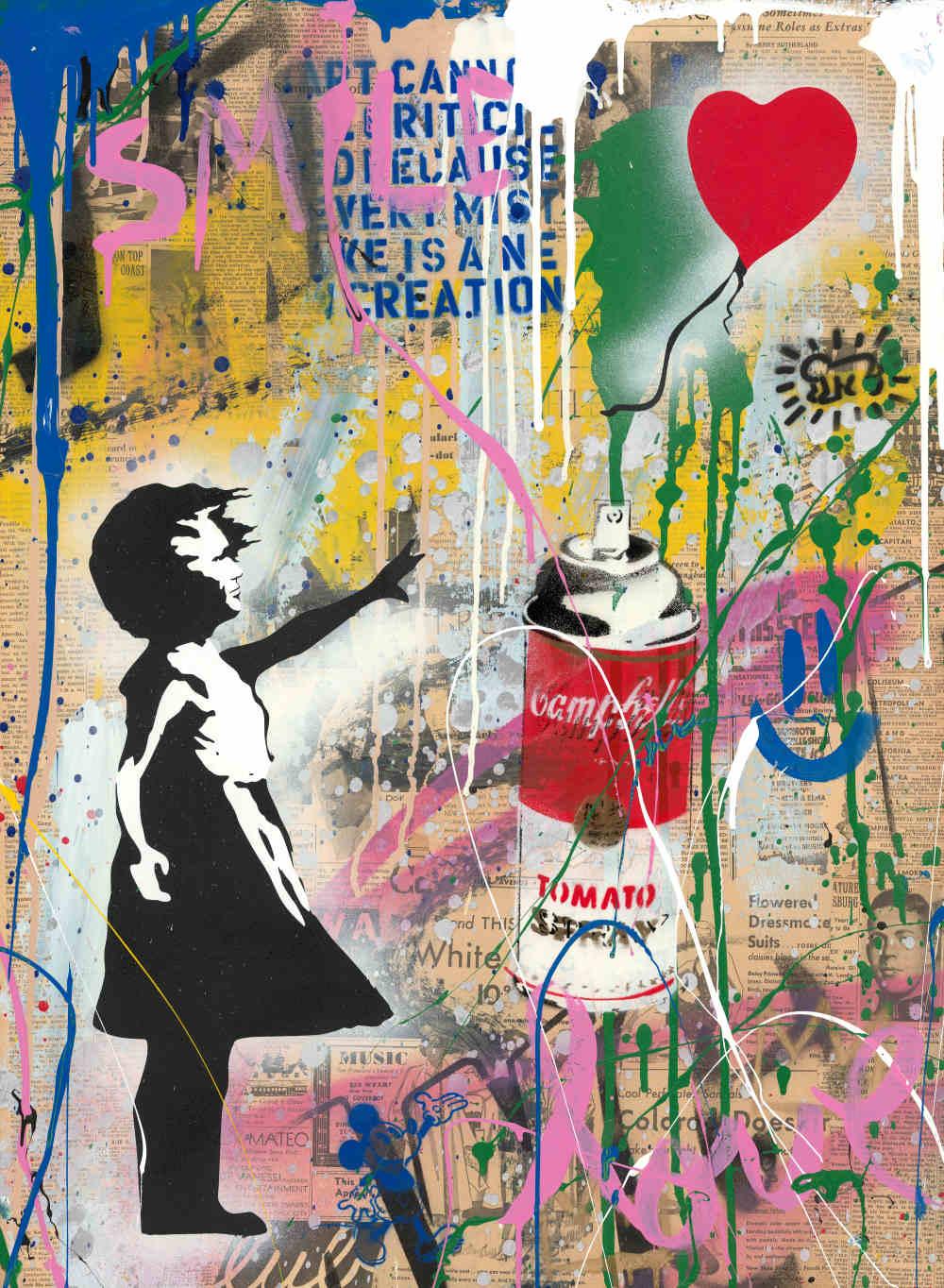 Thierry Guetta, best known by his moniker Mr. Brainwash, is a French-born, Los Angeles-based street artist. He came to London last week to showcase his new collection and his banksy inspired street art.

Mr Brainwash will also look to create a giant mural at Battersea Power Station to commemorate the opening of London’s newest tube station. This will then be part of a London light show projected onto this iconic landmark building making this the perfect moment to invest in his stunning contemporary artwork.

He first came to a small press gathering next to Battersea Power Station to a small gathering and then later on that evening to a gallery run by Clarendon Fine art in the heart of Covent Garden where his work showed on two floors. Clarendon Art Gallery was the perfect setting for the show and is a very central gallery in its portfolio where art buyers can buy original and limited pieces.If there were any signs of an economic slowdown , there certainly wasn’t on Thursday night. Every piece sold out. Such is the demand for art in London, it was also very evident that these buyers were not just appreciators of unique art but also very savvy investors.

He originally began his career  as a photographer and filmographer. He then became an artist where his pieces  sold for five figures in the beginning sums which was helped largely by an endorsement from Banksy back in 2010. He has since exhibited in the Saatchi Gallery and created an album cover for Madonna and his pieces going for 90,000 GBP plus on Wednesday were considered a great investment piece and there was certainly no shortage of buyers.

With the current climate art is a hot commodity, and because of his impact in the art world, buying a piece of art from this artist is in our view a successful investment piece. The art is unique and the marketing machine is savvy. Very sophisticated pr machines are one thing but when backed up with the real deal, these pieces can be worth their weight in gold . Buying a piece from Banksy in the early days gave up to 1400 % returns.

The concept behind Mr Brianwash and his art are very clever too . Why Mr Brainwash and why so appropriate today? Many of the population have been brainwashed on a large scale on many events , whether it is a novel virus or a marketing campaign however this french artist was awake to these campaigns early on.  Mr. Brainwash was invented around the early ‘90s,” Guetta explained in an interview with Paper magazine.

“When you watch TV, when you buy clothes, when you come to a bar or a club or when you do anything, how do you get there? Everything’s brainwashing, and I used to take any kind of brand and twist it.”

“I would take Nike, and I’d make the logo exactly the same, but with an arrow, and I’d write under it, “Just did it.” Instead of Kids ‘R’ Us, I’d put Boys Are Nuts.”

From being discovered by Banksy – the artist has  experienced a very fast path to commercial success with his big foray into the commercial art world — his ‘Life Is Beautiful’ exhibition in Los Angeles in 2008 — earnt him an estimated six-figure sum. What is interesting is that Guetta uses a special signature and authentication on every art piece the mantra “Life is beautiful,” his thumbprint, signature, and an assigned dollar bill number sequence.

Mr. Brainwash’s estimated net worth is currently about $20 million. That comes from a combination of commercial collaborations, auction sales, and other income from Mr. Brainwash’s films and our estimation is this is only going one way and that is up .Watch this space.