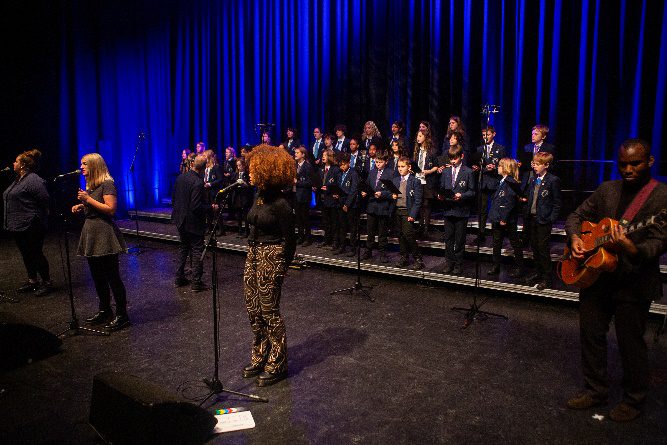 Brighton Dome has partnered with Sound UK on a nationwide project, A Song for Us, which commissions leading musicians to write new songs inspired by the people of their county. The project seeks to capture the spirit of communities coming together that was felt during the pandemic, while celebrating the uplifting power of music to unite and commemorate the many lives lost across the country.

A Song for East Sussex has been written by Brighton-based band Normanton Street, working with Varndean School Choirs, arranged and led by David Berliner. Taking inspiration from local people’s reflections on Covid-19 and lockdown, The Last Time I Held You explores feelings of grief, loneliness, worry and hope, featuring verses from rapper Bobbie Johnson and spoken word artist AFLO. the poet and vocalist Phoebe Freya singing an emotional chorus with the choir. A special performance of the song, filmed in Brighton Dome’s Concert Hall, will premiere online at brightondome.org on Tuesday 14 December at 12.30pm. It will then be available to watch on asongforus.org for a year.

For The Last Time I Held You, we surveyed how local residents were feeling about lockdown, so it’s inspired by them. Their views informed the vibe and some of the words of the track. We took a really collaborative approach and it was great to work with our friends and fellow artists Aflo. the poet and MC Bobbie Johnson on a couple of verses”.

The first song in the project was released on 23 March 2021, to mark a year since the start of lockdown, and forms part of a growing music map of the country that members of the public can also contribute to. People are invited to share songs that hold special meaning for them or capture their experience of the pandemic, with budding songwriters encouraged to upload their own work. So far, more than 600 people from Penzance to Inverness have shared songs, with 85% being original compositions, spanning from a teenager’s reflection of lockdown to a 90-year-old thanking their fitness instructor. East Sussex residents can contribute their songs to the music map on A Song for Us website.

Alongside Normanton Street in East Sussex, 13 other songs have been commissioned across the country, including This Is The Kit & Bucky in Bristol, Seth Lakeman in Devon, Gwenno in Cornwall and Little Boots in Lancashire.