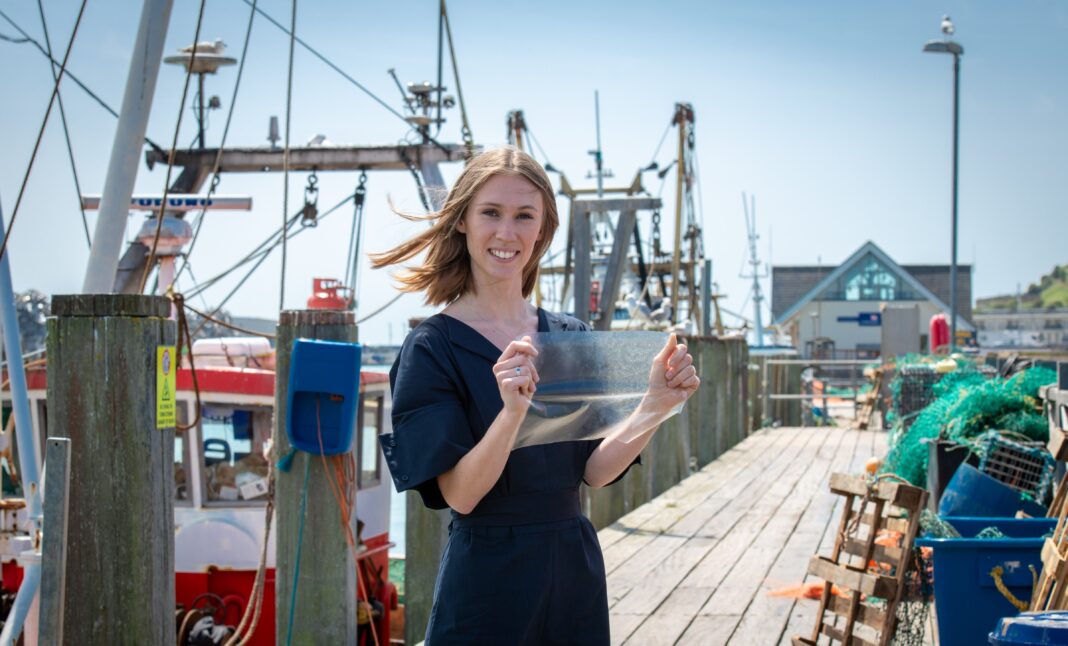 Hughes won the awards’ UK national prize of £5,000 back in September, and has now been awarded a further £30,000 to develop the invention.

MarinaTex attempts to solve the problem of both single-use plastics and inefficient waste streams by harnessing fish offcuts to create a unique plastic alternative. It is made from organic fish waste ordinarily destined for landfill or incineration and locally sourced red algae, bound together to form a translucent and flexible sheet material, making it ideal for applications in single-use packaging.

Speaking about her achievement, Hughes said:

I never thought it would make it to this stage. It’s really encouraging to have the potential of the material acknowledged by such a prestigious award.

The James Dyson Award is a highly sought after design award. It inspires and celebrates the next generation of design engineers. The award is now in its 15th year, and is open to any university student working in the field of product design, industrial design or engineering.

This year’s competition brief was to “design something that solves a problem”, and head judge Sir James Dyson felt that MarinaTex fits this brief perfectly:

Hughes beat over 1,000 entrants from 27 countries to win the prize.

Hughes was inspired to develop MarinaTex as her final year university project because of the worlds’ vast over-dependency on plastic. In Britain alone, we use five million tonnes of plastic every year, nearly half of which is packaging. We also produce 492,020 tonnes of fish waste annually. It took over 100 different experiments to refine the material and process, most of which she did on the kitchen stove of her student flat. The end result was a product that biodegrades after 4 to 6 weeks in home compost.

Regarding her product and vision for the future, Hughes says:

Plastic is an amazing material but we’re too reliant on it as designers and engineers. It makes no sense to me that we’re using plastic, an incredibly durable material, for products that have a life-cycle of less than a day.  For me, MarinaTex represents a real commitment to innovating plastic use and incorporating sustainable, local and circular values into product design. As engineers, we shouldn’t limit ourselves to designing to form and function, but rather form, function and footprint.