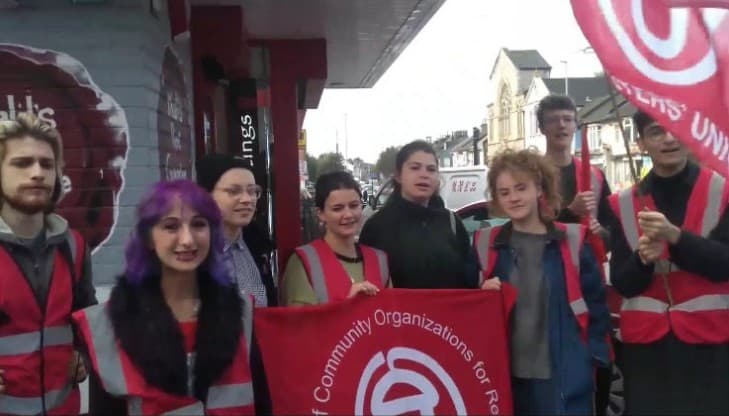 Members of community union ACORN have been taking to the streets to get homeless people, those in temporary housing and private renters registered to vote in the upcoming General Election.

ACORN members have been working across Brighton and Hove to register voters at soup kitchens, housing advice and community centres, street stalls and in temporary accommodation. Their team of volunteers has also been hitting the streets to door-knock in areas which have a high number of private renters and low voter turnout. The union has successfully registered almost 100 people to vote in Brighton and Hove, including 50 people with no fixed address.

This action is part of ACORN’s National Renters Vote campaign to mobilise people in vulnerable housing, including the 12 million private renters across the UK, to vote in the General Election. Private renters and those in temporary accommodation are much less likely to have their voices heard in elections than homeowners and other tenants. The high levels of insecurity, with tenants often facing eviction or re-location multiple times a year, means that these people often fall off the electoral register.

Chair of the Brighton branch of ACORN Sam Dunnett said:

The needs of low-income and vulnerably housed people need to be heard in this election. It’s shocking that 90% of homeowners are registered to vote, but only 50% of people in private rented housing are. Many homeless people we have spoken to weren’t even aware that they could register without a fixed address.

We think it’s important than everyone registers to vote, especially those who are suffering the effects of the rigged housing system. The effects of this unfair system in Brighton means that almost a third of people are now living in private rented accommodation, as well as over 4,000 people struggling in temporary accommodation. ACORN members have been hitting the streets day and night to make sure that these people can demand their fair share in the election.

ACORN’s registration drive comes as shocking figures reveal that the number of homeless voters is incredibly low. Figures from the Electoral Commission found that only 2,963 individuals registered under a “declaration of local connection” in 2016. This is a fraction of the estimated 320,000 homeless population. You can read the Union’s ‘Renters Manifesto’ here.