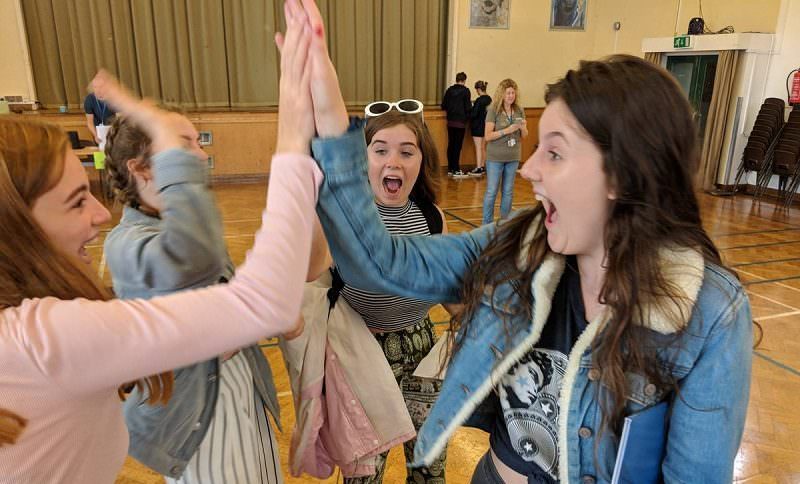 Overall GCSE results in schools across Brighton & Hove have improved this year, according to key new performance measures introduced by the government.

Brighton and Hove City Council yesterday said the ‘Attainment 8’ measurement, which shows average attainment at individual schools across eight subjects, has improved in the city. Last year the city’s overall Attainment 8 score was 46.8, while this year the figure is 48.0.

Most GCSEs are now being graded from 1 to 9, with 9 being the top grade. Government guidance advises that a Grade 4 is considered a ‘standard’ pass.

This new system was introduced last year for maths and English, but this year nearly 20 other subjects are now also being graded in this way.

The subjects with the new 9-1 grades introduced this year are:

The exams themselves have been seen by many as being tougher than before.

Here are how the schools in Brighton & Hove performed on results day and how they celebrated their results yesterday:

From their Twitter account, Varndean School congratulated one particular student, stating: “Beth, you are amazing, and so are your results! Eight grade 9s and two grade 8s is exceptional. Well done, we’re super proud.” A joyful Beth can be seen below:

Patcham High school were also celebrating the news yesterday that 77% of their students passed English and 73% passed Maths, which both figures are well above the National averages.

Stringer also added that over a third of all grades achieved were at grade 7 (A) or higher and 155 Grade 9s, the new highest grades.

Brighton Aldridge Community Academy (BACA) yesterday stated that 66% of students secured a 9-4 grade in English, 57% in Maths. 48% achieved 9-4 in both English and Maths.

Principal Bob Speight congratulated students collecting their GCSE results yesterday, saying: “These are the product of many years of hard work and students, parents and staff should all be very proud of what has been achieved.”

Longhill congratulated their students stating on Twitter stating, “we are so proud of you all, you’ve worked really hard!”

Three of the schools top achievers, Adam, Abdul and Cameron are seen below:

Fellow Hove school, Blatchington Mill School, celebrated fantastic results yesterday with 80% of students achieving  a grade 4 or above in English, and 75% achieving this in Maths. Overall 30% of students achieved the EBACC measure (English, Maths, Science, a Modern Foreign Language and a Humanities subject all above a grade 4) – well above the national average.

At Hove Park, for a second consecutive year there was an improvement in outcomes across a number of key measures, including a 5% rise in the proportion of students gaining a pass grade in both English and maths, up to 67 percent from 62 percent in 2017.

Portslade Aldridge Community Academy (PACA) were delighted yesterday with another year of exceptional results, both in terms of progress and attainment. 71.4% of students achieved grade 4 good passes in both English and maths, up from 70% last year. 56% achieved grade 5 and above ‘strong’ passes, also up 6% on 2017.

Principal of Ms Katie Scott said: “PACA students have performed extremely strongly with 15% of entries being awarded top 7-9 grades. I believe these results could put us in line with the top 5% of similar schools nationally.”

“The new Attainment 8 system is widely recognised as an effective way of measuring overall school performance across their wider curriculum.

“This year-on-year improvement is above all due to the sheer hard work and dedication of our students.

“It also comes on the back of improved results city-wide at both A-level and primary level.

“I would like to congratulate all of our young people, as well as the secondary schools, teachers and support staff who have supported them.

“I would also say any students who did not get the results they wished for to remain positive.

“As well as A and AS levels there is a fantastic range of vocational and other opportunities in our city, including apprenticeships, to match any skills you wish to develop.

“Congratulations to the council’s schools team and the city’s Education Partnership for their continued collaboration to raise standards.”

“Today’s results show that this approach is working well.”

The Attainment 8 scores for 2017 nationally were worked out in a slightly different way to this year using a government-approved methodology for converting old style A*-G results to the new 9-1 system, and the results for this year are provisional, and will be subject to formal verification later in the year.

Further information on the GCSE grading system can be found on the Department of Education website: https://www.gov.uk/government/news/new-gcse-9-to-1-grades-coming-soon.