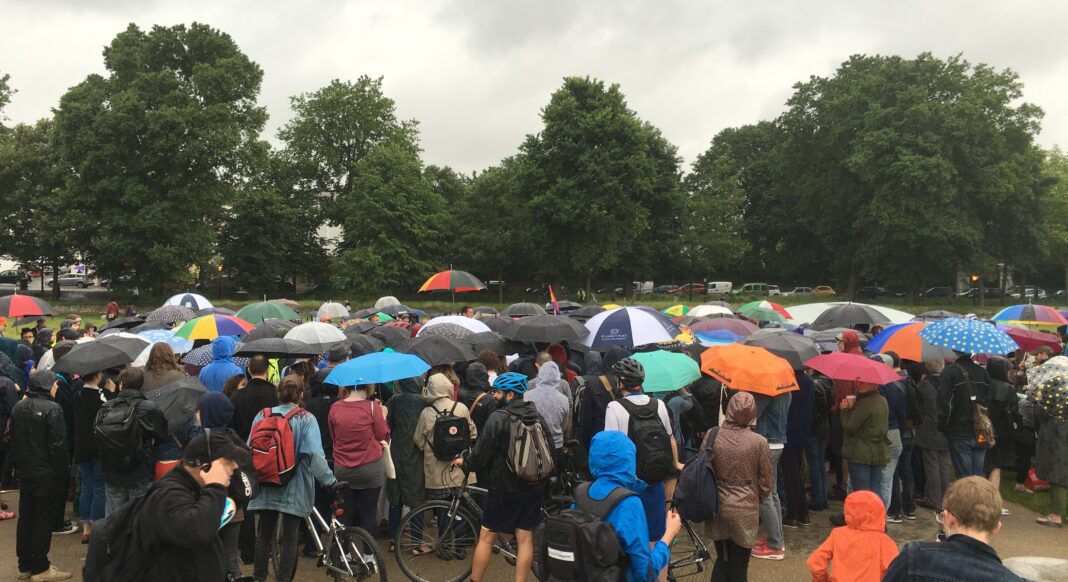 The rain wasn’t the most dispiriting thing about The Level last night. Near on 200 people turned up despite the dreary weather to reflect on something else dampening their spirits, the referendum.

Although it still seems like the only thing people talk about right now, the dust is starting to finally settle and it is time for reflection – and that is exactly what these people did. It was not a violent protest, or a demonstration or a whine – it was simply a gathering for the people in Brighton who feel disheartened, feel deflated, to talk about what happens next.

Caroline Lucas was away on Parliamentary duties but her message was heard loud and clear through her husband Richard Savage, who spoke on a small platform in the middle of the hundreds congregated. Her message was pretty clear, EU migrants were welcome here in Brighton. There was no animosity, simply a rallying cry for those who voted Remain to not give up, to keep fighting. Everything said was met with rapturous applause.

What was striking about the movement was the shear turnout; despite the rain hundreds huddled together to support each other at a time where it seems nobody knows what will happen next. There is so much uncertainty surrounding Britain right now, scarily so. The country is in limbo, leaders, MP’s and even the England team are all left not knowing where to turn next or what the next step forward is. The only sense of comfort, of continuity at this monumentally uncertain period of politics is the fact that in Brighton, you are not alone.

We navigated our way to the back of the crowd to ensure a better view, and noticed one crowd member slightly separated from the pack. He was alone and appeared to be just taking the very notion of what was happening in. We spoke to him about what exactly he saw as being the future for Brighton now.

So I guess my first question is what made you vote remain? Paul responds with a dry: “Why are you assuming I voted remain?”

We all look at the two clearly worn stickers on his chest. “Well lots of reasons really, I think would be disastrous for the economy to leave the EU. Already, I think that young people already struggle to find opportunity and now they can’t travel, live or even educate themselves in Europe now and that is a triple blow to the young. And, I’m genuinely not anti EU in any way”.

Did you expect this many people to be here today? Paul tells us that he has no idea, he “doesn’t usually come to this kind of thing”. That is the epitome of what this referendum has done, and will continue to do. It has split the country, yes, but it has affected people in such a way that it is driving people to publicly show their beliefs, and I struggle to see that disappearing. Like Paul’s stickers, the messages of both sides will continue to be worn for months to come.

We ask next, if [he] thinks there should have been a referendum in the first place? “I’m not against the idea of referendums in general, I’m not anti democratic” He continues, “I think it is about the question that is asked, if you only ask one question every five years you’re more likely to get a protest vote. People aren’t used to the power.”

In regards to a second referendum, we are reminded that it would upset those who voted leave and that “in reality that we couldn’t have one next week. Maybe at the end of the leave process in a couple of years, maybe it would be a good idea to hold another one then – but the problem, will the EU want us to do that”.

With so much up in the air, it is hardly surprising that one idea leads to another ramification, leading to another solution that brings more problems. We have entered an endless cycle now of complications and ramifications, with no end in sight. However something rings true with that sentiment, it seems now that the decision has been made that people are scared of the consequences, and not ready to take up the mantle of independence. Power is a new notion to many, but Paul continued “it wasn’t rigged, that many people did vote to leave”.

Do you see any specific ramifications for Brighton post Brexit? “Sure” Paul says, “There are loads of students that come to Brighton to learn English as foreign language and I think this will scare them away – especially if they hear some of the anti-immigrant rhetoric that is going away. Seeing these videos on the internet makes me shake with anger.”

“Obviously, the economy is fragile everywhere and obviously the main industry here is students and I think they will be put off – even if Brighton is a bubble and I don’t think we will see the kind of anti immigrant speech we will see elsewhere, but still.”

We thank Paul, and let him get back to the speeches being made.

It is clear that the result of the referendum does more than simply annoy the losers; it has deflated half the nation. It has driven people out of their homes in the rain to come together to spread their own message and rally together. To console each other as if a part of Britain had died. It was a moving image to see as we walked along The Level, to be greeted by such a wave of people despite the abysmal weather. This was a demonstration of the spirit in Brighton, Leave may have one the battle but the war rages on in Brighton.  As the poster for the event suggests, Brighton should stand together in the aftermath of Brexit to that people from the EU are of course welcome in our city, as after all – we won’t find our way out of limbo overnight.

Paul is right, Brighton is notoriously bubble like. It’s voice was loud at the referendum, shouting remain. But the referendum is about isolation, and that is what it has done to Brighton on a basic level.  It is a harsh reality, that such a democratic way of decision making can lead to hundreds of people at a park, covered in rain and scared about the future. But, it is a reality none the less.

Artist of the Week: Howard Kingston

MEET THE INCLUSIVE START UP COMMUNITY THAT HELPS PEOPLE BUILD THEIR...