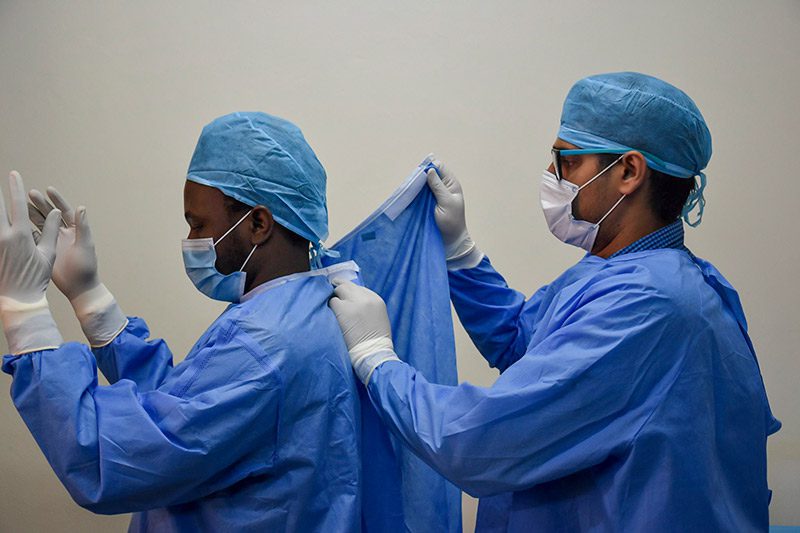 A cross party group of MPs’ including Brighton’s own Caroline Lucas has joined forces with the Good Law Project in an attempt to take legal action against how the government has awarded PPE contracts during the current pandemic. The organisation founder, Jo Maugham is claiming that the Prime Minister and his Conservative party should be held accountable for what they deem as a’ persistent and unlawful’ failure to disclose the details surrounding dubious and inefficient Corona virus contracts, believed to be worth up to £3bn.Written by Matthew Meehan

The coalition which includes the Green Party leader, Labour’s Debbie Abrahams and Liberal Democrat Layla Moran believe that Westminster has conned the public out of enormous sums of money throughout the pandemic by providing hundreds of contracts to companies who do not have the ability to carry out the orders effectively, however have been selected due to their friendly relationship with the current government.

In many cases, it appears that those selected have never before been tasked with the procurement of PPE or any kind of equipment for healthcare protection, and often even operate in many different sectors that have no relevance at all. The largest of these is a £252.5 million contract handed to Ayanda Capital, a company registered in tax haven Mauritius and who are owned by former investment banker Tim Horlick, that while still report to Companies House as a trading and financial management company were instead hired on the 29th April to provide an undisclosed amount of face masks for the NHS.

Other firms hired include Uniserve, who were handed an £186 million contract for PPE equipment despite their owner being classified as the speaker of pro Brexit group Prosperity UK , chocolate and sugar confectioner Clandeboye Agencies who were handed £108 million, a medical supply company ran by a prominent Conservative peer and Medicine Box ltd, who had half of their £40 million contract payment frozen by the Royal Bank of Scotland as the transaction to obtain medical equipment from China apparently went through a public house that had also once had the honour of hosting a meeting between China’s Xi Jinping and then prime minister David Cameron.

Even more concerning is the fact that some of these companies often had insufficient assets or operating funds to still be in business, with some having an insignificant amount such as Pestfix’s £18,047 when compared to the order they were tasked to fulfil, while others had even less with more than one having only around £100 to their names and actually being considered dormant in relation to active trading status.

The case by the Good Law Project pertains to the fact that for a government contract, a company is expected to go through an bidding process where it can then be scrutinised and assessed to ensure only the highest quality, largest capacity contractors are hired to complete these orders, yet despite this many if not all of the winning bids actually did not have to go through tender. There was not even an advertisement to publicly offer the procurement so no one else actually knew these contracts were in need of procurement.

In this situation, the only way a company is deemed eligible to receive such contracts would be through a ‘direct award’ – where the contractor is the only single supplier with the

capacity to produce on the scale demanded by the need, however there is no evidence to support this being the case and many of the hired companies were either extremely small or did not even operate in the same sector as Healthcare provision.

The only exception to this rule is when the government stipulate that the requisite condition of ‘extreme urgency’ is an unforeseeable circumstance and while Covid-19 would technically classify for this ruling, the EU had prior knowledge of the developing global situation since February, giving the government adequate time to launch an effective bidding process. Such a timeframe would only be insufficient due to ineffective decision making which ultimately put lives at risk, or simply presuming that the government doubted the true extent of the global pandemic.

Considering that the extreme urgency clause regarding contracts is for immediate service, their length of 12 months is also counter intuitive to this claim with the exiting of lockdown measures and the nine or so months following giving what would be perceived as adequate time to re-evaluate these choices.

Even if the companies did somehow qualify through this concept, there is still much uncertainty as to the contracts themselves. Considering the poor financial state of the providing businesses, this would assume that the government simply handed over cash whilst also never announcing the award within its 30-day window, or even publishing the details within the 20 day window as described by law.

Due to all these unanswered questions, Caroline Lucas’ coalition and the Good Law Project have officially requested a judicial review to force the government to be accountable for these actions, feeling that they have failed in their ultimate obligation to achieve value for money and provide good commercial judgement when spending public money and therefore must provide clear evidence of the step taken to justify the award of these vastly expensive contracts to companies seen as insufficient to handle the task required.

With a hearing now set to take place in mid-January 2021, and mounting evidence to suggests that in fact the supplies these companies provided has often been insufficient, returned to the supplier and even in severe cases deemed ineffective in providing adequate protection- there is a vital need to understand the failures that may have taken place, if nothing more than to ensure that public safety has been paramount and no corruption has taken place in regards how the almost £12 billion current figure has been spent in the name of such public protection. There is also a great duty of care, not only for transparency but also to consider the after effects should this be proven, with the realisation that such behaviour in the wake of a global pandemic makes the actual loss of life being a very real consequence.