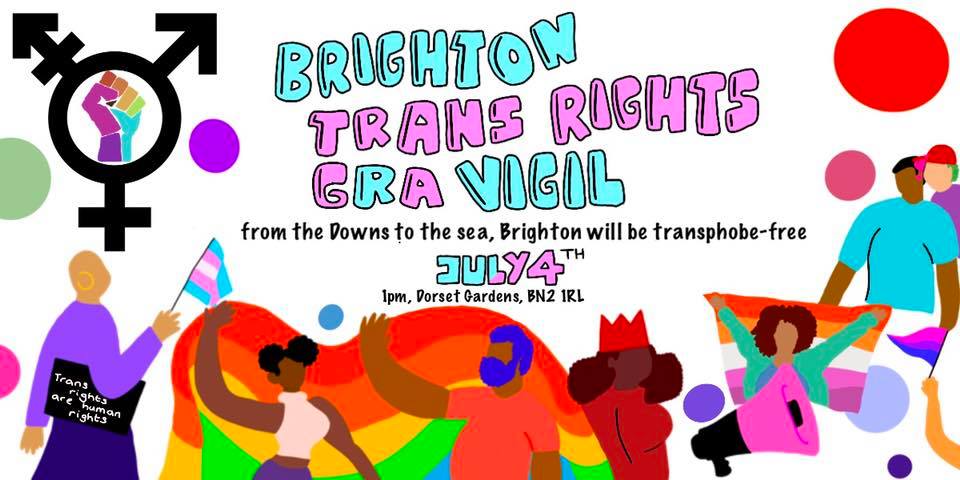 A statement in support of this weekend’s Trans Vigil has been released by Councillor Amanda Grimshaw, Equalities lead for LGBTQ+ at Brighton & Hove City Council.

The Facebook page used to organise the vigil, which is set to take place at 1pm on July 4th at Dorset Gardens, explained the reasons behind holding it:

“This will be a peaceful vigil, held on July 4th to coincide with other national events, to demand that trans rights not be removed and to remember and commemorate those whose lives have been lost to transphobia and transphobic violence.”

“On behalf on the city, we are extending our support for this weekend’s vigil on trans rights and changes to the Gender Recognition Act (GRA).

“We stand in solidarity with our trans, non-binary and intersex communities.”

Cllr Grimshaw expressed her pride in Brighton & Hove for being an inclusive and safe city for all members of the LGBTQ+ community.

In her statement, she also expressed concerns that “plans to reform the GRA might be abandoned” which would greatly impact the trans community, and “runs counter to the government’s commitment to LGBTQ+ rights.”

The councillor also reassured LGBTQ+ residents and visitors that they can expect to be treated with “dignity and respect” as “we have strong cross-party political support for our commitment to equality.”

Cllr Grimshaw shared her support for GRA reform and the reasons behind the need for it:

“The right to recognition as a person before the law is guaranteed in numerous human rights treaties and is a fundamental aspect of affirming the dignity and worth of each person.

“Under the current GRA, trans and non-binary people in the UK face significant barriers to legal recognition.

“We support the call for the government to reform the act to allow for a transparent, accessible administrative process for legal gender recognition based on self-identification and clearly reject policies that would subject trans women to discrimination and expose them to harm.

“Many people and groups in the city took the time to respond to the government’s consultations for the GRA last year and their views should be acknowledged and listened to.”

She then explained that the council has been listening to first hand experiences from local trans and non-binary people in order to use education and evidence to lead the services they provide and the responses they give to concerns from the LGBTQ+ community.

Cllr Grimshaw assured the trans and non-binary people of Brighton & Hove that the council stands by them, and that “trans lives are not open for debate”:

“To our trans and non-binary communities we, once again, stand firmly alongside you. We work hard to defend your right for full inclusion and trans equality.

“We recognise the challenges and increasing hostility directed at trans and non-binary communities and how harmful narratives are attempting to change conversations, policy or the direction of full inclusion and fairness.

“We are staunch in our commitment to full equality and the pursuit of a fairer city for all. We are proud to celebrate our city’s diversity and offer support and solidarity.

“In Brighton & Hove we are proud of our commitment to trans equality.

“Everyone deserves to be valued and treated with respect. That is not open to debate. Trans lives are not a debate.”

She finished her statement by urging those attending the Vigil to keep themselves and others safe by wearing masks and following social distancing guidelines from the stewards.

For more details about the vigil, check out the official Facebook event page.