Home Events “I slept with my best friend’s boyfriend”

If you had the privilege of being stuck at Brighton station last week, you might have noticed something to make your gruelling commute a bit more interesting. As part of Brighton’s digital festival, musician and software developer Alan Donohoe and Steven Parker created a waiting board consisting of anonymous confessions sent in by the public online. The idea was inspired by philosopher and author Alain de Botten and over five thousand messages had been submitted. Similar to that of Jerusalem’s Wailing Wall, the aim of the wall was to make people stop and reflect whilst waiting for their train. Donohoe says that his motivation was the pressure put on us by society to be constantly happy. 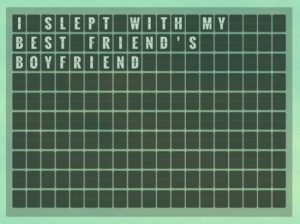 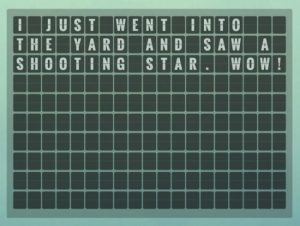 “We’re constantly being told that we’ve got to be happy all the time…we all have faults, make terrible mistakes and are haunted by things like lost love and personal failure. Acknowledging that you have problems worth sharing is still a big taboo in our society.” Donohoe told The Guardian, “There’s a strange feeling attached to waiting somewhere so busy, in such a transient place.”. After approaching mental health charities for funding but with no avail, though they supported the idea in theory, Donohoe secured funding from the Arts Council to cover the cost of renting one of the prime advertising slots, ensuring the confessions would be in-between adverts for car insurance and packets of crisps.

“We’re constantly being told that we’ve got to be happy all the time…we all have faults, make terrible mistakes and are haunted by things like lost love and personal failure.”

Donohoe claimed that there had been little trolling and of people taking advantage of the anonymous confessions, although they did vet the confessions before allowing them to be shown on the Wall. The confessions ranged from general musings, some questioning oblivion and the universe before the big bang, and some were heartbreakingly sad. The Wall gave some people a chance to admit things they may feel they cannot admit to friends and family such as ‘I’m glad I never had children’ and ‘I’m in love with my best friend’. The Wall gave people an outlet to reveal secrets they may have never revealed in real life. Though the Wall has now left Brighton Station, there are plans to recreate the Wall at various other locations in the UK, though Donohoe and Parker’s ultimate aim would be to have the Wall up in Times Square in New York. 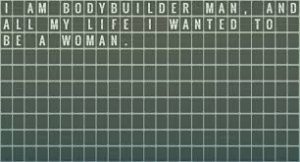 Did you see the wall? If you saw it, took any pictures, or even submitted a confession we would love to hear from you!!