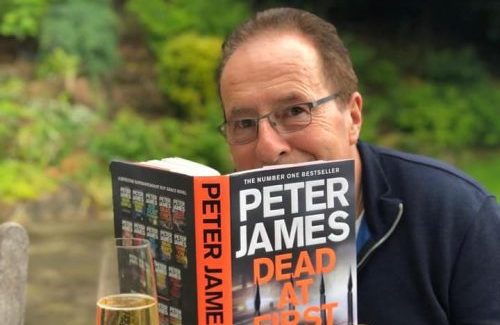 Following the release of his latest novel Dead at First Sight, all of us at Brighton Journal were delighted to be granted some time to speak to local resident and superstar author Peter James last week. Well known for his handling of crime fiction and particularly a series of books following Sussex-based character Roy Grace, his latest offering tackles the pertinent issue of internet romance fraud. Romance fraud occurs when scammers set to hoodwink their victims through online dating sites. Using fake profiles, they build up an intimate relationship with their targets before exploiting their supposed emotional connection to extract money. During a wonderful hour of chatting, we spoke at length about the new book, about the life of a writer and of course we discussed our wonderful city. He even name-checked a few of his favourite restaurants and pubs…

Featured Image and all other images © Peter James Facebook

If you read to the end we also have a teaser about our Peter James competition, exclusive to Brighton Journal Followers!

Having read the new novel I have an idea of where the motivation came from for writing it, but in your own words can you explain what triggered the beginnings of Dead at First Sight?

I was contacted by Sussex police in 2017, asking if I would write about internet romance fraud, which not everyone will be familiar with, but it is now one of the biggest crime growth areas throughout the UK. The police had recorded crimes adding up to £30 million in the Sussex area alone at the time I started writing. Typically, the victims are conned out of between £10,000 – £250,000 and in extreme cases half a million. The age bracket is usually between 50 and 90 – elderly people who are looking for love the second or third time around.  Because it’s impossible for the police to have an officer in every home protecting people from this, it was my intention to raise awareness by using theme as a platform for the book. I had been particularly touched by the tragic stories of vulnerable people losing everything. From there it was just a case of writing it. 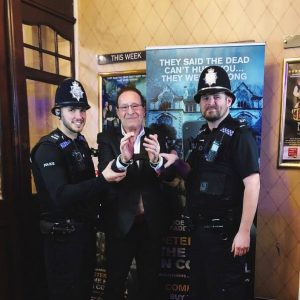 And am I right in thinking an encounter with an old acquaintance heavily influenced a certain thread in the story-line?

Yes, I had a chance encounter with a motivational speaker, Steve Bustin, whom I had a loose acquaintance with from a few years previous to this. He had had his image and personality stolen and used as a tool in this sort of a scandal – on 11 different dating sites. He’d been alerted to this from somebody who had thought they had been online dating him. They had suspected foul play and cross-checked his face only to find out his real identity. From there the story-line began to emerge and I have had some great feedback already about people who have encountered this sort of injustice.

Staying in the world of technology you have very active social media accounts. What is your relationship with this and how do you think a modern writer should approach it? Do you see it as a second job?

I’m very much involved; I have a team headed by my wife who manages them day to day but I am involved in every post and try to look at every message I receive. In the early days I did everything but it has got to the point where if I gave it all of my attention I would never write another word of prose. It’s like a second job – I write the equivalent of two novels a year in social media interactions. Most people are lovely, but some people can be really stroppy. Certain fans focus in on the details from the novels as if true to life – which is great – but they take umbrage as if I’m betraying a real-life event. And if I don’t respond to them in time, I have known some particular people to block me! ‘I have seen that you’ve read my message. But you haven’t bothered to reply.’ I may consider writing some of these characters into a future novel – and decide their fate accordingly. 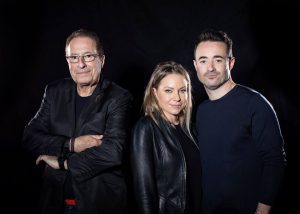 This is the 15th instalment of the Superintendent Grace series; what keeps you coming back to this character? Do you feel you owe it to the readers to keep him alive?

Half of the readers would murder me if I stopped now. But I genuinely love writing them; when a new Grace project begins I feel like I’m returning to my mates. I check in with them, ‘How’s work? How’s the train wreck of a love life going?’ I also find the police world utterly fascinating. In a single day the variety of human life they see in unparalleled. Often tragically so. Also, keeping abreast of how crime has evolved in the fifteen years I’ve been penning this series is very interesting to me. In terms of wearing the Grace cloak, one of the hardest things to achieve – it’s an alchemy – is what makes a reader love a character. It’s chemistry and if you happen to hit the sweet spot, you’re incredibly lucky. People read books first and foremost to find out what happens to characters they engage with. And I’d like to think my readers have a fondness for Grace and that brings them back to me.

What’s in the pipeline – the next instalment of the series I’ve heard?

I do also write stand-alones outside of the Grace world. The paperback edition of my what-if thriller Absolute Proof will be released in July – and there will be the sequel to The House on Cold Hill out in October.

Coming back home now, you were born here, and you draw on the city a lot for your subject matter. Do you still spend a lot of time in the city?

Yes I do, I was born and raised in Brighton. When I was a kid in the 50s and 60s Brighton was quite an unsavoury place. When I left the county to go to boarding school, I told people I was from Sussex – kept it vague. There was a palpable Graham Greene vibe about the place. Certain names and families you would try to avoid around the bars and pubs at the time. It’s changed since then – it’s hard to say when – it probably started in the 1980s and certainly when it became a city. It’s now become the coolest place in England. 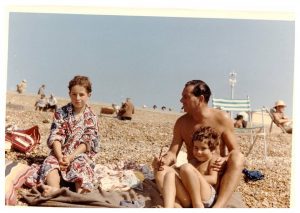 And what are you most proud of about here and what would you change?

I often marvel when I’m in and around the seafront at how much the place has changed. For the better. We have the magic of the sea and then a couple of miles north up Dyke Road we have some of the most stunning countryside in the world. I’ve always felt the waterfront needs work and I’m happy to see that is now happening. It’s a shame to see the arches over towards Kemptown in such a bad way. I’d also love to see it become even more cycle friendly without disrupting what the vehicles must do. I cycle a lot and it’s difficult because the streets are largely so narrow – more pedestrianised areas would be good for the city. As long as we don’t kill the day-tripping culture. 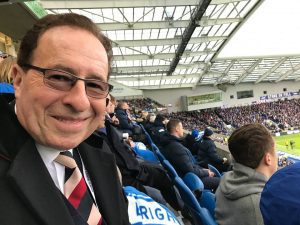 You’re a big food and wine enthusiast; where would you say are unmissable places for this in Brighton and Hove?

My favourite is one of the oldest establishments around – English’s. Family owned, I always take old friends there. Again, there is a little bit of a Brighton Rock theme to it. There are so many other great places – Etch in Hove I would recommend for something fancy. GB1 at The Grand is a beautiful room for fine dining. And if you’re in the market for a curry – an upmarket one at that – the Chilli Pickle is superb.

In my home county, Yorkshire, you’d struggle to find a gourmet Indian… 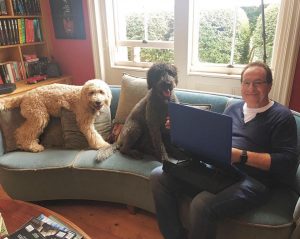 Do you tend to get recognised when you’re out and about?

I am always happy when somebody wants to chat. And I am lucky that lovely people buy my books. Writers don’t tend to get any hassle – it’s usually the actors who stand as the face for any adaptations that get bothered.

Lastly, to any aspiring writers out there, what would your advice be to all of those hoping to get their first novel published?

Firstly, read your favourite authors and novels of theirs you would love to have written and then deconstruct them. Pull it apart the way a mechanic would a car engine. Secondly, it’s important to write something every day – six days a week. Find a level you’re happy with. 250 words, one page, every day is achievable. From there you should get into a mental space where you’re going to bed thinking about it. You may even dream up your next chapter. Not forgetting – the all important first page. Make sure it’s gob-smacking. It’ll help you stand out from the rest of the pile on the agent’s desk. I used Gatwick airport as a setting in the first chapters of the new novel – hopefully a place a lot of lucky Sussex residents can identify with.

Before we say our goodbyes, Peter finishes by offering me his advice as and when I finish the manuscript I’ve been working on for what feels like years. And that sums him up really. Despite the sinister undercurrent that epitomises his work, Peter is thoroughly charming, a supreme story-teller and a local person worth celebrating. The thrilling new novel is out now.

Keep your eyes out for an exclusive Peter James giveaway we have coming up. There will be 3 signed copies of Dead at First Sight up for gabs very soon… 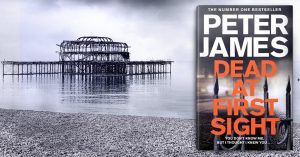