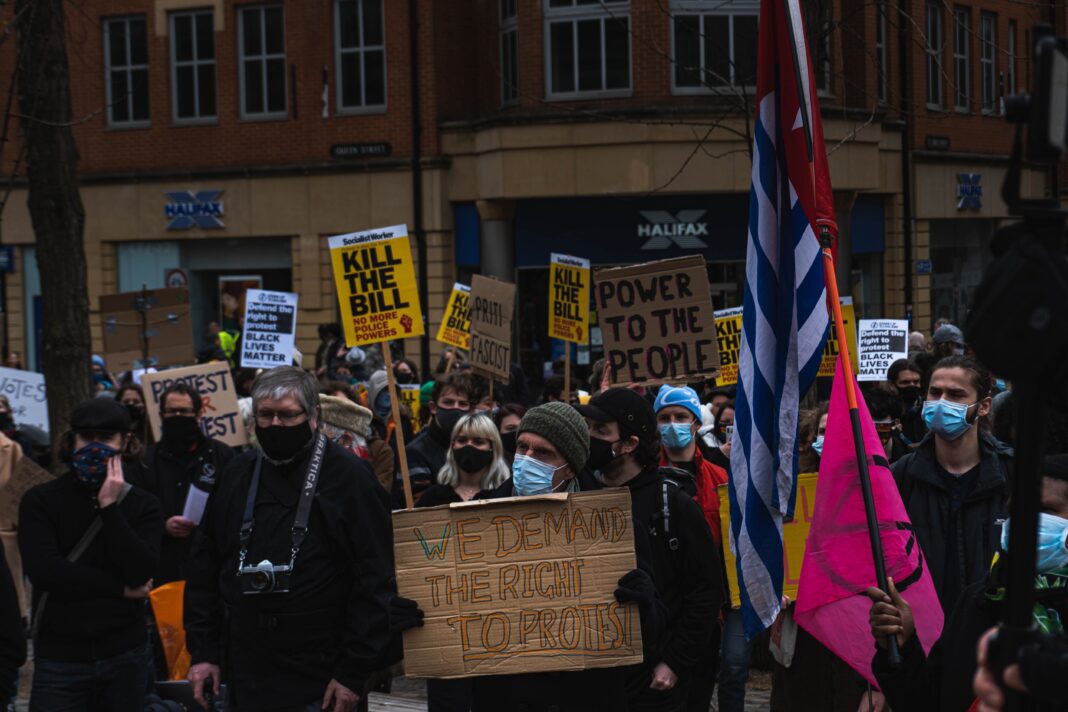 The fourth ‘Kill The Bill’ protest in as many weeks descended on Brighton streets this past weekend as the public rejection of the action continues to grow.

These campaigners continue to resist against the new Police, Crime, Sentencing and Courts bill which seeks to enforce stricter powers by police to change the way protesting works and restrict certain aspects of public demonstrations.

Armed with Placards and banners to visualise their opinions, the demonstrating public charged through the city streets, from The Level down to Brighton Town Hall, performing public protests such as mass staged sit ins which caused delays and disturbance to the traffic moving through the city centre.

Such disruption caused further difficulty for local non-essential shops and hospitality businesses for whom this was their first weekend opening of the entire year due to Covid-19 enforced restrictions, especially with the biggest protest sit-in occurring outside the Clock Tower and on its surrounding roads.

Such demonstrator activity also took place outside Brighton Police Station on John Street, a location frequently targeted in these protests due to its obvious links in enforcing such proposed bills.

Within the current confines of the bill, Police Officers would have the power to dictate and regulate the starting and finishing times for demonstrations and protests, which would not only apply to a large group, but even if the protests was merely a single person endeavour.

Fines up to £2,500 are enforceable, with up to 10 years imprisonment for the desecration or damage to memorials and statues.

Much of the opposition to the bill has come due to the fact that it is seen as a gateway to the limiting of civil freedoms, with protests such as this then legally allowed to be shut down if the Police somehow see it as inappropriate.

There are also grave concerns that the current imprisonment term for statue vandalism is three months, and so to raise it to ten years sets a dangerous precedent as violent criminals would actually face shorter sentences than someone who was to deface or damage possibly discriminatory statues.

Following the issues with policing following the Black Lives Matter movement, and the current worries following the death of Sarah Everard, there is grave public concern about giving greater legal powers to an authoritative body that the public is losing trust and respect for.

While still at the committee stage in the House Of Commons, all three Brighton MP’s of Caroline Lucas, Lloyd Russell-Moyle and Peter Kyle voted against the bill at its second reading.