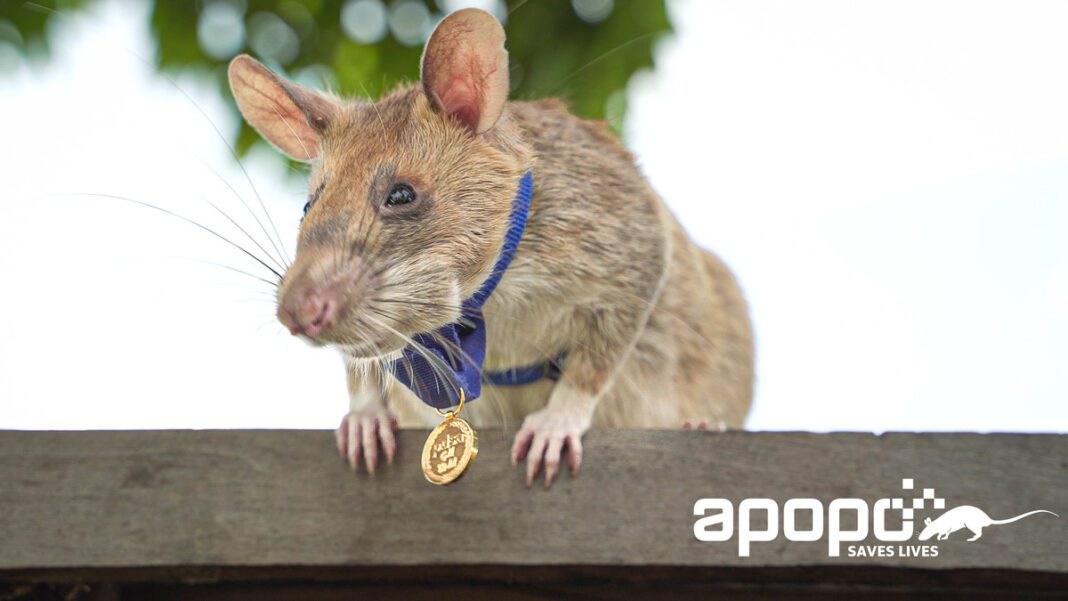 Here’s an uplifting news story for the end of the week: an African giant pouched rat called Magawa has been awarded a prestigious gold medal for his work detecting land mines in Cambodia.

Magawa has sniffed out 39 landmines and 28 unexploded munitions during his career in the southeast Asian country, where there are thought to be up to six million landmines left over from the country’s civil war in the 1970s and 80s.

The UK veterinary charity PDSA presented him with its Gold Medal for “life-saving devotion to duty, in the location and clearance of deadly landmines in Cambodia”. He is the first rat to receive the award.

The rodent was trained by the Tanzania based charity Apopo, who have been training the animals – known as HeroRATs – to detect landmines and tuberculosis since the 1990s.

“To receive this medal is really an honour for us,” Apopo chief executive Christophe Cox told the Press Association news agency. “But also it is big for the people in Cambodia, and all the people around the world who are suffering from landmines.”

Thanks to their highly developed sense of smell, the rats can be trained to detect a chemical compound within the explosives, making them precise and speedy searchers. Magawa can search a field the size of a tennis court in just 20 minutes.

During training they hear a ‘click’ and receive a tasty food reward for finding the correct target scent.

Once they find an explosive, they scratch the earth to alert their human co-workers. Despite being much larger than your average rat, giant pouched rats are still sufficiently light to not trigger the mines when they walk over them.

Magawa works for just half an hour in the morning, but at 7 years old he is nearing retirement age. During his 4 year career, he has helped clear over 141,000 square metres of land (the equivalent of twenty football pitches), allowing local communities to live, work and play without fear of losing life or limb.

“The work of HeroRAT Magawa and Apopo is truly unique and outstanding. Cambodia estimates that between 4 and 6 million landmines were laid in the country between 1975 and 1998, which have sadly caused over 64,000 casualties. HeroRAT Magawa’s work directly saves and changes the lives of men, women and children who are impacted by these landmines. Every discovery he makes reduces the risk of injury or death for local people.

“The PDSA Animal Awards programme seeks to raise the status of animals in society and honour the incredible contribution they make to our lives. Magawa’s dedication, skill and bravery are an extraordinary example of this and deserve the highest possible recognition. We are thrilled to award him the PDSA Gold Medal.”

You can watch Magawa’s story here.