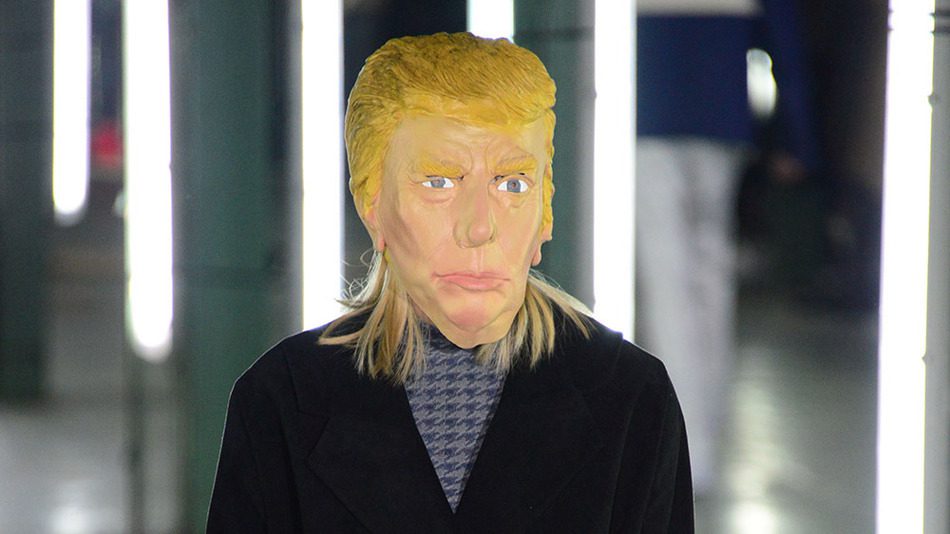 The past few weeks, designers and fashionistas have flocked in and around Europe for Men’s Fashion Week and we got to see what was in store for menswear for Autumn/Winter 2016. It’s out with the military styles and in with the exaggerated proportions, punk vibes and “existential blandness”. Oh, and Donald Trump masks.

Oversized everything: Raf Simmons’ catwalk was full of oversized sweaters and puffy coats as the models walked the catwalk to the Twin Peaks’ Soundtrack. Huh. Anyway, expect lots of massive coats teamed with skinny jeans for next Autumn.

Looking unkempt: Tailoring has been huge in menswear the past few seasons, straight legged jeans, tailored jackets, a nice pair of shoes…but throw them all away (or just, put them to the back of your wardrobe) because Autumn/Winter 2016 is all about frayed hems and long hair.

Fur: Who knew Chewbacca was such a fashion icon? All things shearling, mink and fluffy were standout pieces during the menswear collections, particularly on the Burberry and Coach 1941 catwalks. They were teamed with sweatshirts and trainers, probably in an attempt to make it more casual. Probably wouldn’t wear it to Nando’s though.

Hoods: Possibly trying to defy the countries increasing security powers, designers whacked hoods on pretty much everything, from tweed jackets to a weirdly classy velvet hoodie.

Classic White Shirt: The classic white shirt is a must in everyone’s wardrobe, and this Autumn/Winter is no different. It’s the best way to tone down the eclectic styles we will no doubt see next Autumn, acting as a nice barrier between bold prints and…velvet hoodies.

Coronavirus murals: inside the world of pandemic-inspired street art