On the listing for the sold out event, which took place at Hangleton Community Centre, Kate was simply billed as a ‘Special Guest’. During her set, where she gave an exclusive performance of her unreleased album, Kate told listeners that she was thrilled to be back in Brighton, as well as requesting for no filming to be done for the duration. Her set came as the final performance that rounded off a sun-filled day, attended by Hangleton residents.

Speaking about her performance, Kate said that Hangleton Community Centre is “one of [her] favourite places ever to play a gig”, as well as adding “I feel really chuffed and really happy to be back.” 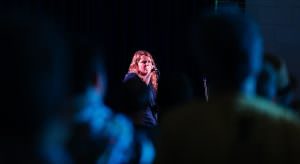 Kate’s performance came as part of Your Place, an immensely successful initiative that began last year as part of 2017’s Brighton Festival. Your Place is hosted in local community centres, in coordination with local artists and performers, and brings a diverse schedule of free events and shows to Brighton Festival. Your Place runs across two weekends; the first of which has already been, but the second takes place this coming weekend on the 26th & 27th May at Manor Gym, East Brighton, and gives local residents the chance to take part in creative activities, as well as connect with their neighbours.

Hangleton Community Centre’s manager, Valerie Foucher, has said that “Your Place has opened a door that we do not want to close again”, demonstrating the enormous impact the event has had within Brighton communities. The initiative initially began on the basis of Kate Tempest’s belief that “the arts should be in our communities, not only on elevated platforms or behind red velvet ropes”, and it’s beginnings in 2017 attracted over 2000 local people.

Visit the website for more information on Your Place.