A set of new council homes in the city’s famous North Laine have won the Best Architectural Design award in this year’s South East Construction Awards.

The development in Kensington Street was praised by the award panel for reflecting the history and distinctiveness of its North Laine location, as well as contributing to the regeneration of the street.

The development includes one two-bedroom house and 11 one-bedroom homes, including a fully wheelchair-accessible flat. All the homes have been built to high energy and water efficiency standards, and provide much needed affordable homes for the people of Brighton. 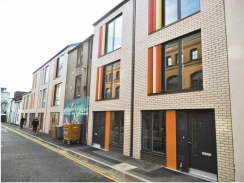 With their attractive light-brick exterior and big, modern windows, the homes have been very well received by North Laine residents.

North Laine resident Michelle praised the council for including residents at every stage of the development process:

The homes were developed in close consultation with local residents, the city’s housing and planning departments and councillors.

They replace three run down sites that had been very popular with street artists, leading to the street being dubbed ‘Graffiti Alley’.

The development is part of the council’s ‘New Homes for Neighbourhoods’ programme, which aims to build 500 new council-rented homes in the city. You can find out more about this programme here.

Featured image: © ‘Buildings and architecture of Brighton and Hove’ via Wikipedia.