Brighton & Hove Albion have formulated such a tremendous season that their automatic promotion hopes fall to the last game against Middlesbrough, coined, “The £170 million pound game”.

So much so that a new events company have erected their newest equipment to support the boys in the blue.

The Brighton Journal met up with Zoe Kiss-Chinman, the founder of Just Occasionally, to talk about her new company, and why she is supporting the boys in blue. 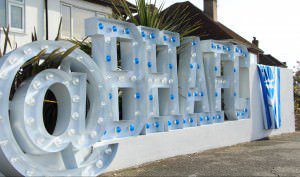 I’m sure people will want to know, when did you started following Brighton F.C? My partner, Steve, asked me last Friday if I could do something to show our support for Brighton & Hove Albion, so I agreed! We put together ‘BHAFC’, and then he asked, “can we make it blue and white?”, so we made it blue and white.

The fans loved it last week, so this week we thought we’d make it bigger and better. So this week we went for, ‘Seagulls’ ‘#win’ ‘@BHAFC’. So the big football fan in the family is my partner!

Like the rest of Brighton, we’ve got right behind the team and we think it would be fantastic for the city following promotion.

How has the public reacted to the lights? 99% of the public have been fantastic, they’re beeping, taking pictures, shouting “Seagulls”, they’re tweeting about it, you name it!

We have however had a little bit of negativity, the first weekend we put it them up, we got some trolling from Crystal Palace fans online. We’ve even had phoney pizza orders come to the house! Jealousy is an ugly trait.

You’ve recently started the events company, Just Occasionally. What made you want to start a company that specialises in event lighting? I saw a programme around Christmas of people who had these most amazing Christmas displays, so I thought, ‘this time next year, I’m going to make something amazing for Christmas.’

When I started looking into it, by the time I had hired something, it would have been cheaper to have it made myself. So I realised that there may be a market there. So I thought it would be amazing to make any word or any name and in any colour. So we started a company on the basis of that.

If there was one event you would love to be hired for, what would it be and why?  The BA i360. I’ve already made them their own logo, and I am desperate to give them their name in lights for the weekend.

I’m Brighton born and bred, and I think it’s going to be totally iconic for the town, and I am desperate to be a part of it. 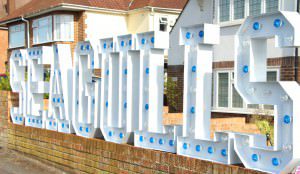