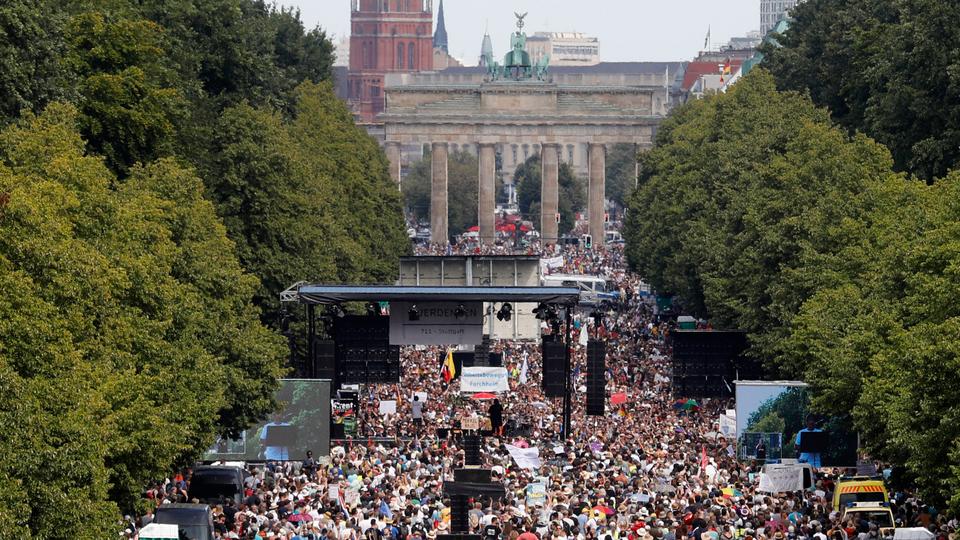 An estimated 38,000 protestors took the streets in Berlin on Saturday in opposition to German restrictions to contain the coronavirus pandemic. Police made around 200 arrests during the two rallies, which took place near federal government buildings. While the protest was mostly peaceful, violence occurred as police forces clashed with about 3000 far-right activists. Law enforcement also had to forcibly remove protesters from restricted areas at the Reichstag building as they reportedly tried to storm the Parliament. On Twitter, the police force stated that several people had entered the staircase of the Reichstag but did not manage to gain access to the building.

Demonstrators marched through the German capital with signs reading ‘End the coronavirus dictatorship’ and ‘Stop the coronavirus madness’; Some also waved far-right banners. Protesters could be heard chanting, “Angela Merkel must go” during the heated picket. Police broke up the march near the Brandenburg Gate after marchers breached coronavirus guidelines, refusing to wear masks or respect social-distancing regulations. Berlin police took to Twitter to announce the decision to break up the protest, stating: “Unfortunately, we have no other option. We’ve approached the leader of the demonstration and informed him that his assembly will be dissolved by the police. All the measures taken so far have not led to compliance with the conditions.” The news sparked confrontations with some demonstrators tossing bottles at police, according to the DPA. One hundred arrests were made. The larger rally, taking place nearby, was not disbanded in accordance with a local court ruling, which declined to prohibit it.

Earlier in the week, city authorities had tried to stop the march from taking place. Due to the fear that all safety measures would be breached in such an environment, Berlin announced a ban on mass protests. This came after a previous demonstration by the same organisers did not comply with safety precautions when rallying at the beginning of August. The ban initially sparked outrage from organisers Querdenken 711, a Stuttgart-based movement with more than 16,000 followers on Facebook. They pledged to protest despite the ban, with some supporters even calling for violence. One leading right-wing organiser called for protesters to “storm Berlin”. However, a German regional court rejected the city’s concerns about security and social distancing. On Friday, judges permitted the mass demonstration in Berlin, overturning the capital’s ban. This came with strict instruction to abide by health and safety rules, including barriers in front of the stages where speeches will be held and reminding participants to socially distance. The judge’s guidelines for the protest did not include wearing masks.

Leaders of the initiative celebrated the court’s decision. Michael Ballweg of the Querdenken 711 said “This is a success for our basic rights” in a YouTube video. He urged supporters to come together for a peaceful protest, stating that “those who call for

violence are not with us.”

Some amongst the many, varied groups that participated in Saturday’s rallies called for the resignation of Chancellor Angela Merkel’s government. One of Berlin’s top police officials, Andreas Geisel, described the protesters as a vast-ranging group of people with one uniting similar interest. The group included libertarians, far-right extremists, anti-vaccine activists and Reich Citizens (those who deny the legitimacy of Germany’s modern-day democracy). Geisel explains: “their only common denominator is the sense of uncertainty related to the coronavirus debate”.

As COVID cases rise in Germany, the prospect of stricter measures or a second lockdown has created a wave of protest. While the numbers have not reached the overwhelming peaks recorded in some surrounding countries, the infection rate is on the rise. The latest case statistics show a recent acceleration that has surpassed the numbers seen in April. On Friday, Chancellor Merkel made a statement forewarning the worsening state of the virus in Germany as the summer months end and people are forced indoors. Merkel also appealed to all German citizens to refrain from any non-essential travel, stating: “This is a serious matter, as serious as it’s ever been, and you need to carry on taking it seriously.” Regional authorities announced €50 fines for breaching mask regulations. The organisers of the Berlin rally, Querdenken 711, say that these virus restrictions are an infringement on constitutional freedoms.

The French and British capitals saw smaller protestors over the weekend. In London, the Telegraph reported thousands of protestors took to Trafalgar Square opposing lockdowns and vaccinations. The number of protestors was around ten thousand , while in Paris, there was less of a trunout around 300 people rallied together against government requirements on masks.

Charity Zumba at Preston Park: A class for all ages and abilities