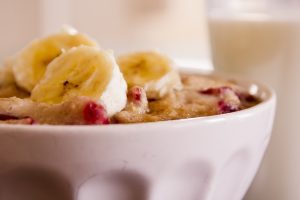 You know those people who say they aren’t breakfast people? I’ve never understood it; I LOVE breakfast. Only when I’m ill do I feel less inclined to stuff my face in the morning. To be honest, I often go to bed looking forward to the morning when I can eat again! I used to religiously eat toast in the mornings; jam, marmite or just plain butter – those satisfying slices of comfort were my go-to morning meal. Don’t get me wrong, there’s nothing wrong with toast, but I personally found it wasn’t giving me that much energy – I’d find myself starving not that long after I ate it. So, in a bid to gain a little more energy I turned to porridge. Ah, porridge. Not the most beautiful, and feared by many. But it really was a turning point for me; I am a porridge convert. I love it.

“those who eat whole grains (such as oats) are less likely to die from heart disease, and bran – a part of whole grains – was linked with a 6% lower overall mortality.”

I’d really recommend it; slow-release energy, high-fibre, they lower cholesterol, plenty of vitamins and minerals – oats have a lot to offer! Not to mention, porridge is best enjoyed topped with fruit, so you can be on your way to your five a day before you day’s properly started! A study by Havard University found that those who eat whole grains (such as oats) are less likely to die from heart disease, and bran – a part of whole grains – was linked with a 6% lower overall mortality. Plus, it is SO versatile and suitable many different diets; for example it can so easily be made vegan by using non-dairy milks. So, any reason not to go for a warming bowl of porridge in the morning? They are super good for you, adaptable and easy to make – and they’re cheap! 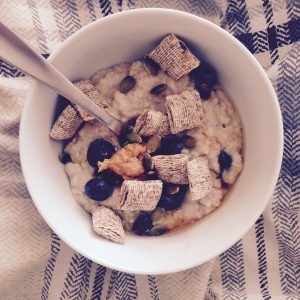 I add blueberries to my porridge every day; these tangy little orbs of goodness can be cooked in with the porridge so that they soften or added by the handful over the top on serving (or like me you could do both – handful as you cook and handful over the top!). They pop and produce beautiful little bursts of sweet bluey purple, adding colour to the bland ol’ oats! Then a swirl of honey, maple syrup or Sweet Freedom as I like to go for, really finishes off this sweet, simple bowl.

Once I discovered the incredible taste of peanut butter stirred into oats I couldn’t go back. If you’re anything like me (running all over Brighton all day every day) then you’ll need the protein for some energy! I’ve also tried almond butter which is equally as tasty. Add a splash of maple for a little sweetness if desired, add some fresh strawberries… it’s abit like a peanut butter and jam sandwich. But with oats. And jam in its fruit form. And oats instead of bread. Okay maybe not… But it is tasty! 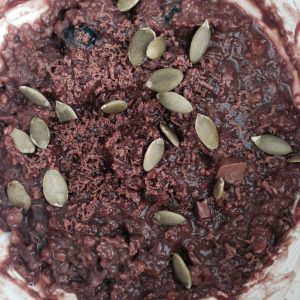 More like a pudding than a breakfast (but still relatively saintly) this is great for special occasions, or for chocolate fanatics like myself who can’t get enough of the stuff! It’s really very simple; just mix a teaspoon (or more if you like it reaaal chocolatey) of cocoa or cacao powder to your milk before adding to the porridge. Add half a teaspoon of vanilla essence. I would add a little sweetener of choice such as maple syrup or fruit syrup, some fresh strawberries (banana is also good) and maybe some nuts or pumpkin seeds. If you’re feeling reaaaally indulgent (and you can handle the amount of sweetness in the morning) then grate over some chunks or chocolate. I may or may not have been known to add a crushed malteaser bunny to my chocolate porridge on occasion…