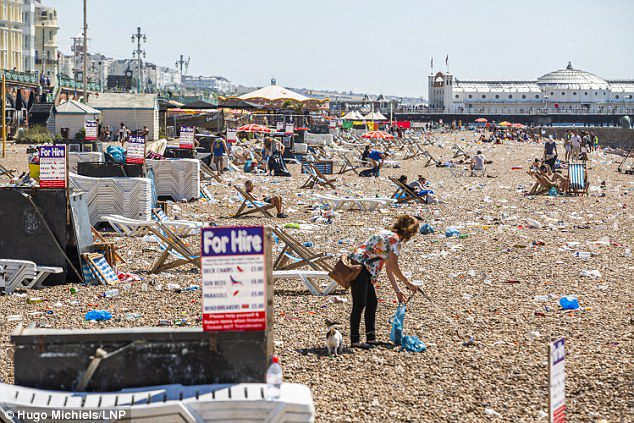 The week before last brought a familiar heatwave as highs of 31 or 32 degrees were reported across the country. On one day a sweltering 30 degrees led to many flocking to Brighton beach. Thousands decided flock to the Southern England beach to try and enjoy the warm weather. With large groups gathering across the pebbled beach, your first thought is probably regarding the lack of social distancing that will naturally occur. But in reality, it was the condition of the beach that made headlines. Written by Sehaj Dhillon

The gathering at Brighton beach was a record-breaking occasion but not for positive reasons. According to Brighton City Council the day broke the record for the most amount of rubbish collected at the beach on one day. On the 25th June, 11 tonnes of rubbish had to be removed from Brighton beach. Normally around this time, the beach averages around three tonnes of waste. Even despite hosting events along the coast they never have this amount of rubbish. Similarly,  another south coast clear up was needed in Bournemouth. An area which was marginally more affected by visitors. A reported 50 tonnes of litter was left behind from sunbathing families.

Councillor Anne Pissaridou is the chairwoman of the Brighton’s environment, transport, and sustainability committee, she has voiced concern about how the pileup of waste has affected the council.  She’s said: “We’re doing our very best to clear the massive amount of rubbish and waste that’s being left on our seafront and in our parks, but we’re already stretched to the limit.” Brighton Council cleaners have been working hard since five in the morning to clear the mess left behind from visitors. With numbers low, binmen, park rangers and  have been ushered out to help cope with the workload. Councillor Pissaridou added: “Not only are we redeploying staff to help with the beaches and parks, we also have to ensure the normal collections of residents bins, recycling and garden waste are up to speed to ensure the city is clean.”

It’s been reported that the council is also doing their best to maintain the cleanliness of the beach as well as the whole city. More bins have been added along the seafront and large bins have been installed in the busiest areas. More collections will also be made each day in large parks. To ensure people don’t continue to add to the problem, enforcement officers will be patrolling Brighton beach from 9am to 8pm and will issue £150 fines to people who are seen dropping rubbish at the beach.

While the amount of litter was a problem, we have to remind ourselves that we’re still not clear from the coronavirus outbreak. News of beachgoers created a reaction from parliament as they felt they needed to act after what happened last week. The Health Secretary, Matt Hancock warned that beaches could be closed if people continue to disregard social distancing rules, however, he was holding back just yet. He said: “We do have that power. I am reluctant to use it because people have had a pretty tough lockdown and I want everybody to be able to enjoy the sunshine.” He said that if there was to be another spike then unfortunately for those enjoying the sun, he would have to act. Likewise, Councillor Pissaridou had warned Brighton that if there was a rise in the number of cases then they would have to close Brighton beach.

Some feel that closing beaches isn’t enough, the Local Government Association has said that closing beaches would just spread the problem elsewhere. Chairman of the Local Government Association’s Community Wellbeing Board, Councillor Ian Hudspeth said that the government must educate people on the risk of ignoring social distancing in local hotspots. Prime Minister, Boris Johnson said that people needed to understand that “mingling too much” would ruin weeks of lockdown. Regardless of what the Government plans to do it’s clear that people need to start respecting the rules as well as the environment around them. New analytical data showed that social distancing can be enforced on a beach, even if there are 78,000 visitors. With lockdown slowly easing away this could be the way City Councils across the country and perhaps the world can cope.