How many times have you had that moment when you realise that everyone’s cooler than you? Let’s face it, if you live in Brighton it happens a lot. The most difficult thing to keep up with though is this real ale business. Ten years ago you would have been happy with a pint of continental fizz. Carling for the working man. Peroni for the toff. Plus ça change though. Now muscled, bearded men in rugby shirts crowd every corner of the pub enthusing over murky brown brew. The best stuff is always British and ideally from an obscure rural area. No longer Brugges or Heidelberg, now Wapping, Witney, Wendover or Walsingham. The breweries have standard ales they make all year round, but confusingly then have seasonal beverages and brews which you can only drink during special events. A lot are being released for the Rugby World Cup, for instance. Once the cup is safely in Chris Robshaw’s sweaty paws they will never be made again.

“Ten years ago you would have been happy with a pint of continental fizz. Carling for the working man. Peroni for the toff. Plus ça change though. Now muscled, bearded men in rugby shirts crowd every corner of the pub enthusing over murky brown brew.”

Real ale drinkers enjoy authenticity. British beer labels reference World War II, colonial themes, Victoriana and Viking or fantasy subjects. The real ale explosion is even taking off in other countries, with British beers becoming a major export. Fuelled by the likes of ‘Game of Thrones’ and ‘Vikings’ even US brewers have begun to abandon the tasteless horror of Coors and Budweiser, turning instead to India Pale Ale (IPA)s.

What if you don’t actually WANT to spend a lot of time learning about ale and just want to bluff it ? What if you aren’t too fussed? What if you are holding a dinner party and one of your guests is a real ale enthusiast? What if your boyfriend or girlfriend demands ale and you want to put something on the table that impresses? What if – like many people in Brighton – you are not from the UK and think beer should be yellow, fizzy and kept in the fridge?

That is where we at Bjournal come in. We test so that you don’t have to. Our resident ale bores – Graham and James from legendary Heavy Metal band Stuka Squadron – have created a list of the top ten ales which will make you look like you know your ale. We have also gone for beers you should be able to find around Brighton. Safety first……

Flavour:              The flavour is not overpowering so this is good ale for dinner parties or barbecues when you don’t need to disguise whatever disaster you are presiding over. If it helps it is supposed to taste of Caramel, wood and fruit. To us it takes like a smooth, light, very pleasant English bitter.

Why we like it: Doom Bar is a perennial favourite with ale drinkers everywhere, including David Cameron – but don’t let that put you off! It is one of the most frequently seen ales on tap and easy to find all over the place. Although Doom Bar is one the most popular ales in Britain, selling 1.5 million pints a week, that doesn’t make it a bad drink. It is popular for good reasons. It tastes great, looks nice in a glass and has a cool name. Although it is the peoples’ favourite nobody will snort in derision if you buy it. A good, credible pint. You just can’t go wrong.

Flavour:              The flavour is supposed to be citrus, and we can actually kind of taste it. The other listed flavours are malt and hops (the fruit they use to make beer). We get kind of a sweet taste as well though. It is listed as an Extra Special or Strong bitter, but at 4.7 it isn’t that intimidating. It does have kind of a strong taste for dinner parties, but might be ideal with curry.

Why we like it: Trooper was devised by Iron Maiden vocalist Bruce Dickinson and has arguably the band’s most instantly recognisable ‘Eddie’ mascot on the badge. For that reason alone we hear that it sold 450 million pints worldwide last year. It is a nice enough pint but the Iron Maiden connection makes it awesome and an instant favourite wherever loud guitars can be heard. If your guests or other half like their music loud then Trooper should be on the table. Be warned though. Iron Maiden like everything heavy. That includes hangovers.

Flavour:              This strong ale is dark red in colour. It is smooth yet thick and we can taste chocolate and maybe coffee. It is a little bitter, but overall an excellent pint. Barak Obama famously turned his nose up at Hobgoblin, prompting Wychwood to produce a t-shirt with the legend “What’s the matter Obama, afraid you might taste something?” Class, and we agree – he missed out.

Why we like it: Wychwood are one of the smartest breweries out there and constantly innovate, producing seasonal and event-related ales with enticing labels and imagery. We have chosen their flagship ale as representative, but anything from Wychwood tends to be good quality and drinkable. We love their folklore-referencing labels which make them a particular favourite if you are buying for Halloween later this month. If you are stuck for an alternative to Crabbie’s look out for Wychwood’s – in our view superior – Gingerbeard. 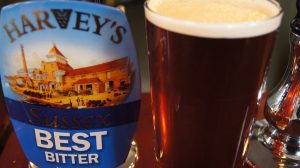 Flavour:              Harvey’s Best is a nice looking chestnut coloured ale. It is neither too strong in terms of alcohol content, nor particularly overpowering in terms of taste, so ideal for most functions. There is supposed to be an orange flavour to it, which we can’t taste, but it is nutty and light on the palate.

Why we like it: “Now is the time for marching, now let your hearts be gay…. Tum te tum… te tum.. te tum… SUSSEX BY THE SEA….” Yes we Brighton people have a county song to sing. We don’t know the words except for this part, but you might hear it when you go to Lewes fireworks next month, police permitting. You will also be able to sink a pint of Harvey’s when you are there, fresh from the brewery by the bridge. If you are looking for a local brew to treat guests to Brighton, Harvey’s is always a good shout.

Flavour:              ESB is a really interesting ale. It is very fizzy, whereas most are relatively still. It is also bitter and yellowish in colour. You could probably chill it without ruining the flavour (ales are supposed to be kept at room temperature although we  think that you can chill them without affecting the taste even slightly). ESB is extremely drinkable. However this is hazardous. Although 5.9% might not sound much ESB kicks likes a mule.

Why we like it: Because of the taste, the fizz and the colour it could be ok for Antipodean or other guests who have yet to acclimatize to British beer. ESB stands for Extra Strong Bitter, and in this case we do think it is justified. It has also been named champion beer in various competitions over the years, has a great reputation and is known as ‘the Extra Strong Bitter against which all others are measured’. You can’t fail with ESB, as long as you don’t mind very drunk guests or are looking for a drunken night out.

James and Graham are unwell. They will return with beers 6-10 at a later date.