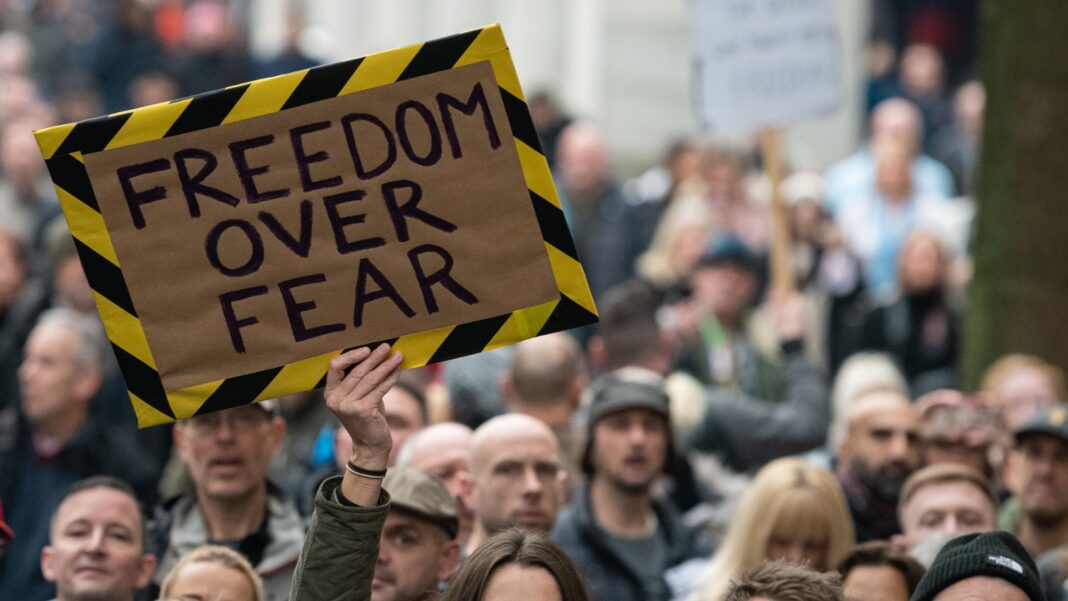 Saturday saw hundreds of people take to the streets of Brighton in protest against the second round of national lockdown measures that came into effect on the 5th of this month. Demonstrators gathered at midday by the Peace Statue next to Hove Lawns, before marching en masse along the seafront to Marine Parade and up through the centre of Brighton.Written By Christopher J.B. Calderon

This followed a vote on the 4th in which the Commons opted overwhelmingly for the new measures by a margin of 516 to 39, with Home Secretary Priti Patel removing a prior exemption and banning demonstrations of more than two people on the grounds that any gathering “risks spreading the disease.”

Social media footage showed the large crowd, none of whom appeared to be wearing facemasks or adhering to social-distancing measures, chanting “freedom” and “we do not consent” while carrying placards with slogans such as “When tyranny becomes law, Resistance becomes duty” and “You can stuff your vaccine up your a***”. It is reported that on at least one occasion protesters could be seen urging members of the public to remove their masks.

Meanwhile, police officers on the scene attempted to disperse the crowd, the local force stating on its Twitter account that they were “engaging, explaining and encouraging people to follow the regulations”. Sussex Police had said that enforcement action “may be taken”, though no arrests have been reported.

The demonstration mirrored similar events that took place in Liverpool, Manchester and Edinburgh last weekend, as well as five major protests that have occurred in London since the first lockdown was implemented back in March.

The organisation Save Our Rights UK, which was responsible for the Brighton rally as well as several of the other events, describes itself as “a grassroots movement that sees how this country is not governed by a real democracy” and “[seeks] to unite people and enact change.” Its founder Louise Creffield, a Brighton resident, has said: “We believe that the coronavirus regulations that are in place are not proportionate or appropriate, and are causing more harm than good.”

Matt Single, also of Save Our Rights UK, stated on the day of the protest that “we’re not standing for a second lockdown. They told us two weeks would flatten the curve and now eight months later they’re bringing in even greater draconian methods to curtail our freedom.”

The group’s website elaborates on these sentiments, presenting as its evidence a combination of genuine grievances and outright distortions.

For instance, its assertion that the “WHO [World Health Organisation] does not advocate lockdowns” is quite clearly a misrepresentation of the WHO’s position. In fact, while the body “[does] not advocate lockdowns as a primary means of controlling this virus”, it recognises that lockdowns “can slow COVID19 transmission by limiting contact between people,” and urges that populations “support those decisions [that] governments make” in “[taking] the heat out of this epidemic right now”.

To add to this, the WHO’s clear-cut guidance that “masks are a key measure to suppress transmission and save lives,” couldn’t be more opposed to the anti-mask rhetoric that has dominated the Save Our Rights UK protests.

On the other hand, the group’s accusation that ministers are basing policy decisions on data that overestimates the impact of the virus has only been strengthened in recent weeks, with senior government advisors Sir Patrick Vallance and Chris Whitty coming under considerable fire from The UK Statistics Authority for data used to justify the second lockdown.

In a public announcement made alongside Prime Minister Boris Johnson on the 31st of October, Vallance and Whitty presented a graph projecting 4,000 daily deaths in a worst-case-scenario. The data used in making this projection was in fact several weeks out of date, with new information that was known at the time of the announcement suggesting a figure four times smaller.

Yet in spite of these factors, MPs voted overwhelmingly in favour of the renewed lockdown restrictions, with Brighton Pavilion’s Caroline Lucas (GRN), Brighton Kemptown’s Lloyd Russell-Moyle (LAB), and Hove’s Peter Kyle (LAB) all approving the measures.

And while Save Our Rights UK puts this failure down to a lack of democracy, figures suggest the opposite: a snap-poll taken on the 1st of November by YouGov showed that 72% of Britons supported returning the country to lockdown, with 42% of that group saying they “strongly supported” the measures.

So while the jury’s still out on the difficult task of responding to the ongoing pandemic, groups such as Save Our Rights UK face an uphill struggle to convince the public at large of their position.