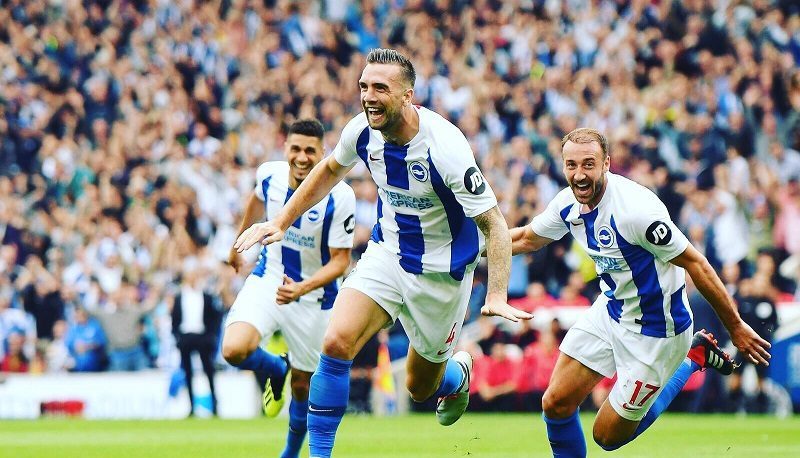 Brighton & Hove Albion’s first Premier League home game of the season, which took place yesterday against Manchester United at the Amex stadium, saw the Seagulls come away victorious with a 3-2 win over the Lancashire side!

This was the 20th encounter between the two sides, whose most notable meeting would have to be the 1983 FA Cup Final at Wembley Stadium (Albion’s only FA Cup final), which saw Manchester United emphatically win the replay 4–0.

Since their first meeting in 1909, Albion have only won 3 times against United, but significantly two of those three wins have come in the last 3 months.

The deadlock was broken by Glenn Murray, who provided the most skilful of finishes from midfielder Solly March’s ball across the box, to give Albion the lead in the 25th minute.

Albion’s lead was then doubled just two minutes later when Pascal Gross played the ball back across the box, and Shane Duffy inside the penalty area, connected with the ball to produce a powerful finish past David De Gea, scoring his first Premier League goal.

11 minutes before half time, United halved the deficit with a goal from Romelu Lukaku. Luke Shaw’s cross into the area after Albion failed to deal with a corner, allowed the unmarked Belgian to nod in the ball, making the score 2-1.

However the game then became only the 10th time in Premier League history that United conceded three first-half goals, as after a foul by Eric Bailly 1 minute before half time, Brighton were awarded a penalty which Pascal Gross converted in, and the half finished 3-1 to the Albion.

Gross can seen below celebrating his goal:

The Seagulls had less of the ball in the second half but remained solid in defence and looked to catch their opponents on the break.

Deep in second-half stoppage time, the visitors were awarded a penalty after Duffy tripped Marouane Fellaini inside the box, and Pogba then converted in from 12 yards.

However it was too late to deny Brighton a famous third win against United, and the Seagulls claimed victory winning 3-2, securing their first Premier League win of the season.

According to the BBC Sport website, Manchester United manager José Mourinho on his sides loss expressed how mistakes cost them the game, stating:

“We made incredible mistakes in some crucial moments. Mistakes that killed us.”

Putting United’s mistakes aside, it what was a controlled and confident display by the Seagulls against a side that finished second last season.

Albion took the game to their opponents from the outset, and although Albion didn’t have a shot after the break, they didn’t need to as they changed tack from attack to containment. In the end it was a comfortable afternoon for Chris Hughton’s side.

From Brighton and Hove Albions official website, delighted Albion manager Chris Hughton, on Albion’s second victory over the Red Devils at the Amex this year, stated:

“I thought the tempo of our game, and the reaction from last week, was very good. Right from the start, we always had an outlet.

“At any stage of the season, to score three goals against one of the top six, is always a very difficult feat.

“The group were that disappointed with the overall performance at Watford, and irrespective of the game being against Manchester United, they were keen to put on a show and readdress that balance.

“Sometimes you do that and things go your way, but sometimes they don’t. We forced things to go our way today, by a very good performance that deserved the win.”

Brighton & Hove Albion winger Anthony Knockaert (pictured above) was thrilled to produce an impressive performance against Manchester United earlier today, and believes the result will give the team confidence ahead of next weekend’s trip to Liverpool.

He said, “It was a great day for us. We were ready for it, especially after the bad performance against Watford. We played on the front foot and tried our best to get something from the game.

“We produced exactly the same performance as last season – we showed determination to win the football game.

“We fully deserved it – it’s a great three points to get just before going to Liverpool next weekend.

“With the performance we showed today, we’ll want to replicate that against Liverpool. It will be another tough game and we’ll see what happens.”

“It gives us confidence going to Anfield, but we know they’re a strong team. They’ve got some great players but hopefully we can get something.”

Although yesterday saw the Seagulls produce a fantastic reaction after their opening-day defeat to Watford, Hughton stressed the importance of remaining realistic throughout their second Premier League campaign.

He said: “The result shifts the mood but it doesn’t change anything for the season ahead – it’s going to be a tough season.

“The teams that have come up are all very capable of winning games and getting points. This division has got as competitive as ever.

“If we think it’s going to be the same or easier than last season, then it’s not going to be.

“We have to make sure that if our level of performance can’t be at this level, then it needs to be at least somewhere near it, to enable us to get points.”

Yesterdays result was a crucial win for the Albion, as their home form played such a huge part in their survival last season, with 29 of their 40 points secured at the Amex Stadium.

Brighton’s next Premier League match see’s them travel to Anfield this Saturday, 25 August, to play Liverpool in a 17:30 kickoff.