Brighton beach now features the fantastic art installation ”A Drop in The Ocean”, made up of almost 9,000 plastic bottle tops collected from the seashore!

Local graphic/web designer and permaculturist Irene Soler, the creator of the colourful installation, teamed up with 60 volunteers to produce the incredible piece situated at the Volks Railway.

Irene, who has been participating in beach cleans for over 4 years, got her idea when collecting litter on the beach and noticied she’d picked up many brightly coloured plastic bottle tops.

Speaking to Brighton Journal about the amazing installation, on her motivations for the piece, she states:

“The amount of waste found on those regular walks was shocking but not necessarily obvious unless you were looking for it. I thought it would be good to do some research and at the same time make it visible to the public. One thing is hearing a story about waste and another having it in front of your eyes.”

Today if you walk around Brighton and Hove, you’ve most likely come across staggering sea statistics advertised as part of the councils #StreetsAhead campaign. #StreetsAhead, which supported the production of Irene’s installation early on, hopes to encourage the responsible disposal of litter, preventing it being washed away in the sea.

With statistics such as ‘80% of litter in the sea comes from land’, and ‘35% of fish in the sea contain plastic inside them’, the detrimental impact of littering and plastic pollution on the beach is frightening.

At 18 metres long, this eye-catching multi-coloured plastic design, seen below, aims to the make people think twice about the plague of single-use plastics on the city’s beaches. 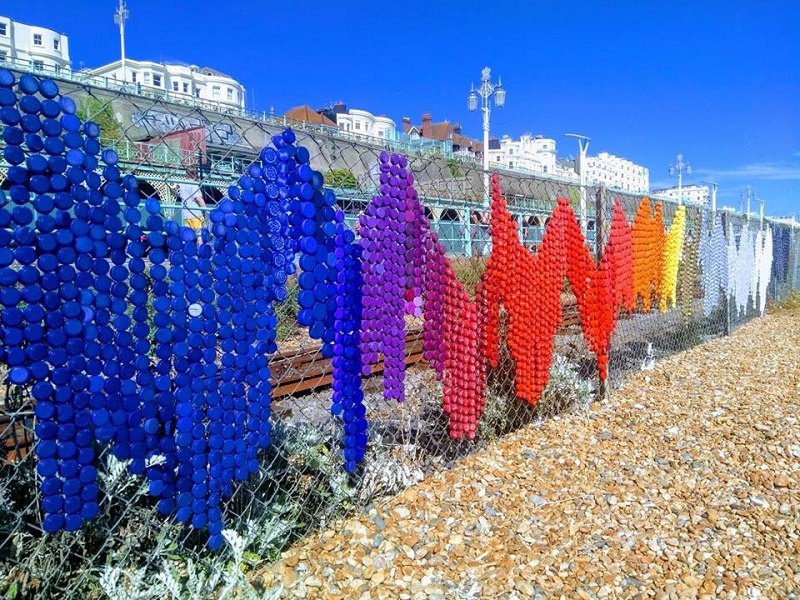 Irene with her vision to eliminate marine contamination, stated: “This project is a survey not only to raise the data about the plastic caps found, but a personal one too.” After beginning to talk to friends and colleagues about her idea of using plastic bottle tops to raise public awareness about protecting the environment, a total of 60 volunteers and city organisations, groups and businesses got involved.

Such organisations included, The Appreciation Society, #StreetsAhead campaign from CityClean, the Volks Railway and receiving some funding from the Rampion Funding.

The tops were collected from people carrying out beach cleans, and businesses – including the Big Beach Café, The Pump Room, Seafront Office, Jungle Rumble, Yellowave, Volk’s Railway Visitor Centre and the World Cetacean Alliance – all who had a special bottle where people could bin their tops rather than bin or discard them.

On the work carried out by the many wonderful volunteers, Irene expressed they, “joined us to help out in every step of the process: collecting, counting, making and installing.”

A shot can be seen below of the volunteers working in the workshop:

The art installation captured not only the attention of the public, but  of councillor of environment, transport and sustainability committee, Gill Mitchell who commented: ”This is a fantastic art installation that really raises awareness of the amount of plastic that is found on our beaches. It also shows how something very creative can be designed and produced from the co operation of the community, various businesses and organisations, and the council”.

For Irene, this is her biggest project to date that she has personally created, and on the whole process she said, “It’s been a great experience, so much learning and the incredible support from everyone whose got involved has been so rewarding.”

This community based installation is still growing, with another two more displays to go up in the following months. The final bottle tops will be added by the end of this year and the installation will stay up until next Spring.

To read more about the project, visit www.adropintheocean.org.uk/the-story.

Cities on the brink of a second lockdown – is Brighton going to be...