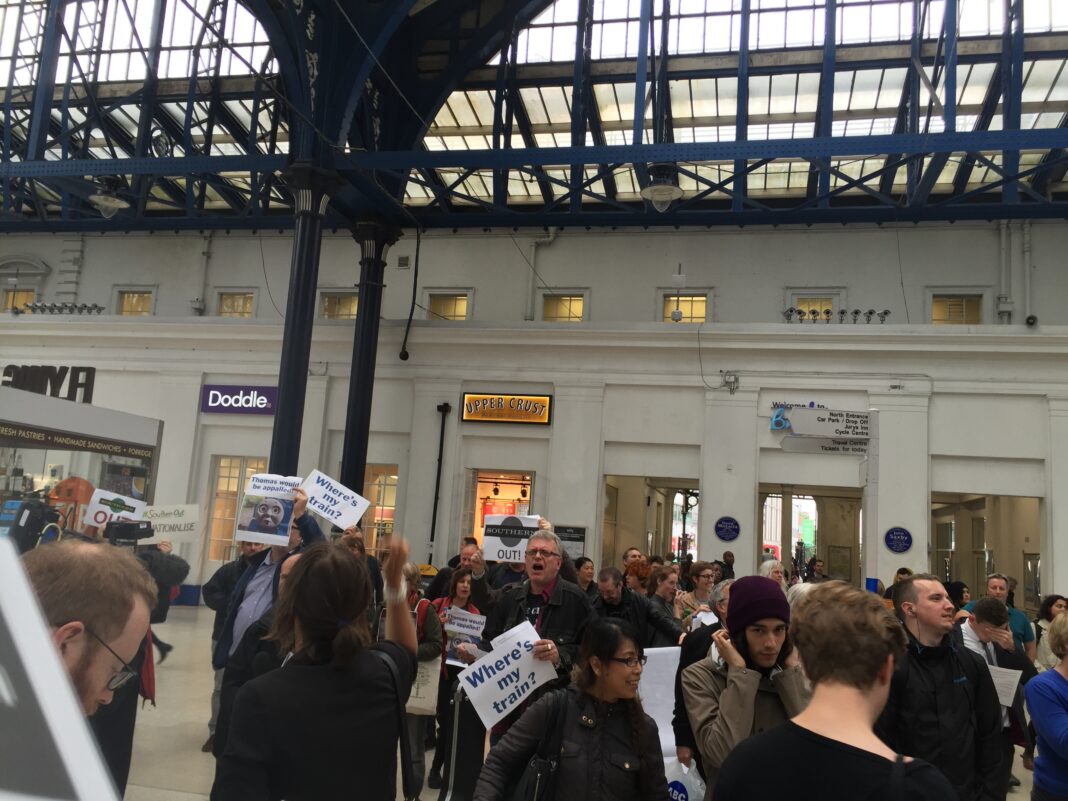 As we mentioned yesterday, more protests regarding today’s RMT Union strikes took place on the concourse of Brighton Station. We were at the scene and managed to speak to prominent members of the demonstration who were more than willing to vent their anger.

The first protester we met as she handed us a flyer detailing all the different ways there were to tackle Southern Rail. The leaflet read “Don’t get mad, get Southern!” in green lettering as well as further information about issues such as refunds, a petition to remove Southern from the Govia franchise and also a plea for frustrated passengers to write directly to the chairman Andrew Allner.

In the other corner of the ring, as it were, there were several hapless Southern Rail employees handing out less colourful flyers detailing how and when trains will be delayed on Tuesday and Wednesday. Several police were also in attendance, however looked unperturbed by what was a smaller yet much more passionate protest than the one previous.

Our first protester, when asked what was making them so angry, didn’t hold back; “Nothing’s been sorted out. They’ve taken our money and season tickets but they’re not providing a train service. We don’t want any more than that.”

The conversation then turned to what could be done about the situation, but our protester was as short on answers as Southern seem to be; “I don’t know, I’m not in the government. It’s all companies owned by other companies.”

At this point, a further protester interjected with the revelation that the train services which run in Brighton are also owned by Brighton and Hove Buses who allegedly “put their prices up on the first day of industrial action”, presumably as an attempt to milk inconvenienced passengers even more. A scandalous but not wholly unsurprising revelation, if true.

The protest continued as the modest yet vocal troop chanted and waved banners. Their demands were simple; “What do we want? Trains. When do we want them? On time.” Yet the crux of their concerns really put into the light of day just how uncomplicated their wishes were. Is it so much to ask that a train company provides trains?

The woman we interviewed ended by saying something which should resonate highly with her fellow passengers, as well as provide Southern with a stark realisation of quite how spectacularly they have bungled their attempt at a functioning train company; “I’m not an expert. I’m just a person who wants to get on a train, go to work, then go home.”