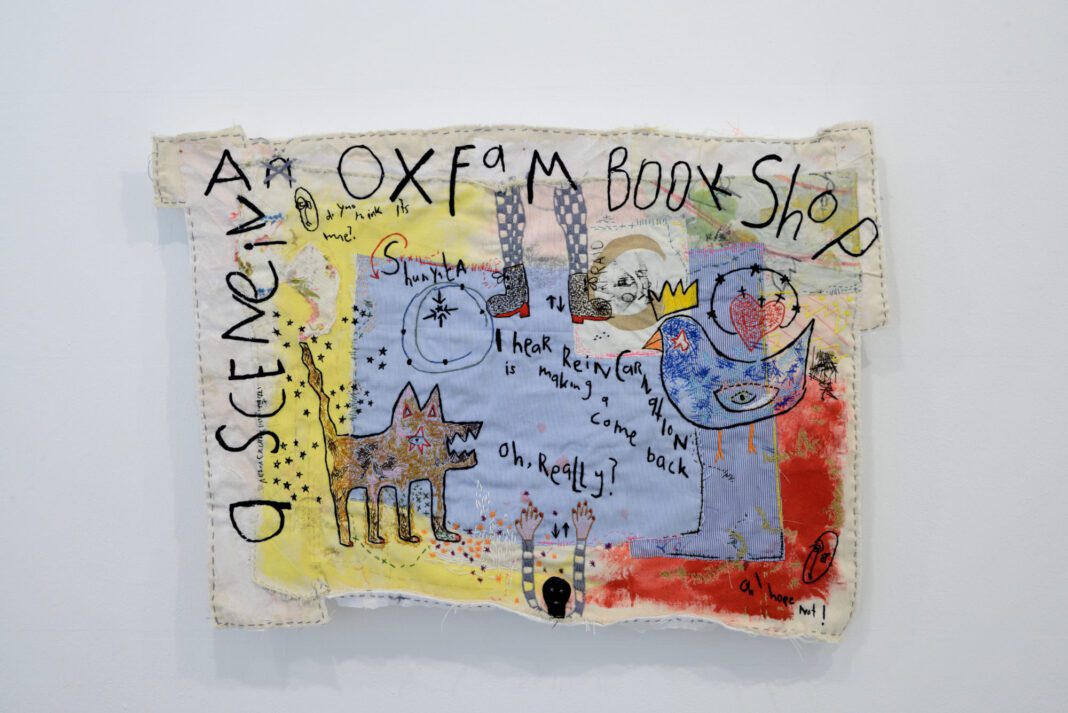 There will be a late opening tonight at the Phoenix Gallery’s latest exhibition tonight which showcases the work of Anthony Stevens (Brighton) and Andrew Omoding (London), in partnership with HOUSE Biennial and Outside In.

The exhibition proudly presents a host of newly commissioned works, shown alongside related existing work of two artists selected by open submission. The two artists this year have been selected from Outside In’s network of over 2500 artists to produce new artworks inspired by the theme of ‘Excess’ and the work of HOUSE Biennial invited artist Laura Ford.

Anthony Stevens​ is a self-taught artist whose work is about expressing personal experiences and processing the consequences. His characterful hand embroidered textile collages draw out satirical observations around human behaviour and our underlying motivations.

The act of making itself is mindful and important process in making the work. Stevens’ work shares personal stories alongside more widely known fables that explore excess and its implications found in mythology, historical events as much as contemporary societal values and consumerist trends. This includes how the need to be loved has been manipulated into a desire to over-consume.

When not producing art, Anthony also works as a Peer Support Specialist and engages in Buddhist culture and peace activities. Primarily, his work is about expressing and processing trauma and its after effects.

His work is heavily influenced by his practice of Nichiren Buddhism and chanting ‘Nam-Myoho-Renge-Kyo’, especially the concept of ‘Nothing is wasted’. This has become manifest by his choosing to work primarily with scrap fabrics. By choosing to do this, he is forced to look creatively and perceive potential in what may seem to be useless and beyond repair.

This is in direct correlation with how he strives to perceive his life and his experiences. As with life, it is sometimes a painstaking and frustrating process, but ultimately he feels joy and satisfaction with the result. Learn more here.

Ugandan born Andrew Omoding’s ​work is largely autobiographical. His mixed media creations include sculptures, books and costumes made from left-over and scrap materials he finds. Omoding selects a variety of found materials to weave, wrap, sew, thread and construct new objects. An intuitive process, the works are created as his stories evolve.

Andrew creates autobiographical 3D work reflecting on his life and experiences: growing up in Uganda, leaving his homeland and moving to London at the age of 12, living in London and being part of a large and loving family. Each artwork begins with Andrew exploring his immediate surroundings and looking for source materials. From there ideas evolve quickly and with a tacit knowledge about how each piece should be presented and experienced. 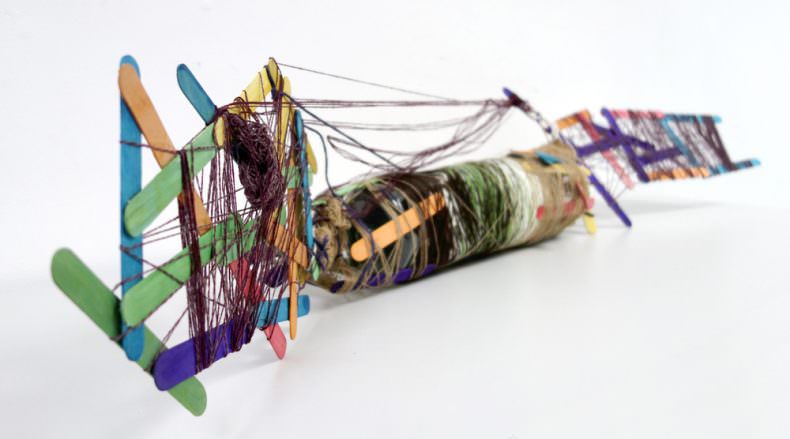 Andrew joined ActionSpace (actionspace.org) in 2010. In 2015 he took part in a 6-month residency as part of the learning programme for Craftspace and Outside In’s “Radical Craft” touring exhibition. During his time in the studio, Andrew was joined by Trevor Marchand, Emeritus Professor of Social Anthropology, SOAS who documented his observations in a catalogue article and film. Learn more here.

Recently, Andrew has begun sharing his skills and abilities by co-leading workshops for children and young people with learning disabilities at Camden Arts Centre in London. He is a natural teacher; patient, sensitive and always concerned that everyone is happy.

Anthony Stevens ​commented, “This is the first time that I have had the opportunity to have a large designated block of time to just create, and it’s a great honour that it is for an event in the city that I have called home for the last decade. I have been a fan of Andrew’s work since I came across his work in 2015 and I am excited to meet Andrew and his beautiful creations. So, with all that excitement in mind, it is time to get to work!”

Celia Davies, HOUSE Biennial curator​ added, “Both artists have been selected for the commission as they share an intuitive approach to working with mixed media and textiles. In relation to the theme of Excess, both artists make use of discarded and unwanted materials and repurpose them to create intriguing and thought-provoking objects that share personal stories and new perspectives”.

Outside In provides a platform for artists who see themselves as facing barriers to the art world for reasons including health, disability, social circumstance or isolation.The goal of the charity is to create a fairer art world which challenges traditional values and institutional judgments about whose work can and should be displayed. The collaboration between HOUSE Biennial and Outside In is a continuation of a fruitful working relationship initiated during HOUSE’s previous May festival slot, where the two organisations co-commissioned artists including Thompson Hall in 2016 and presented an exhibition of work ‘Intuitive Visions’ in partnership with Phoenix Brighton in 2015. These HOUSE Biennial and Outside In co-commissions are presented in partnership with Phoenix Brighton and supported by Chichester Decorative Fine Arts Society.

Conceived in 2008 by Directors Judy Stevens and Chris Lord, HOUSE is a contemporary visual arts festival that began in part as a response to the limited space in the city for presenting contemporary art. HOUSE is curated by Celia Davies and commissions an internationally regarded Invited Artist and selects for commission a range of artists at varying career stages. Inherent to HOUSE is a potential to experience new ideas and different ways of thinking within the artistic process.

HOUSE Biennial Director, Judy Stevens,​ said: “HOUSE is delighted to be co-commissioning Anthony Stevens and Andrew Omoding with partners Outside In. The continuing development of our partnership with Outside In, providing commissioning opportunities for artists currently excluded from the art world mainstream, is an integral and key element of our new Biennial.”

Marc Steene, Director, Outside In​, said: “Outside In is thrilled to be working with HOUSE again and to be able to present Anthony Stevens and Andrew Omoding within the HOUSE Biennial Commissions. This is an important career changing opportunity for the artists involved and I am sure will both excite and challenge audiences.”

The exhibition will run up until the 5th of November, so be sure not to miss it before it’s gone!