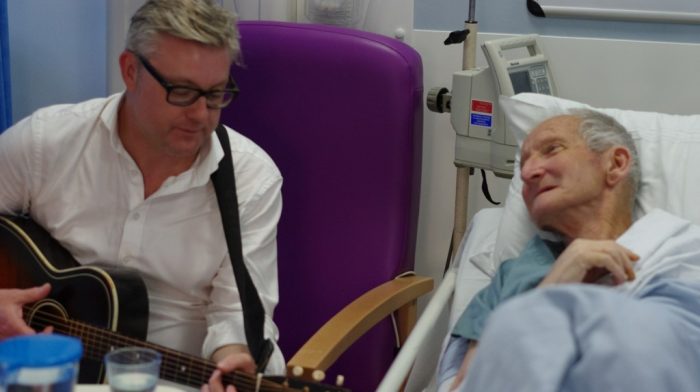 As part of the Wishing Well team for Rhythmix Music Charity, I spend most weeks on the Emerald Ward at Brighton Hospital. Research has shown that the part of the brain that processes music is least affected by Dementia and Alzheimers, therefore playing music to someone at any stage of the disease can help connect them to who they are, even for a brief period.

Throughout the year, Wishing Well musicians get requests for all sorts of music; 20’s swing, 30’s jazz, 40’s war songs, 50’s rock n roll, 60’s pop, 70’s rock even 80’s electro pop. It’s quite a task keeping with repertoire that spans 90 years but if a musician ever wanted a gig that stretched their musical memory then this is it!

Whilst I love all my interactions on the ward, the time I most look forward to is Christmas. Not only does the atmosphere on the ward change; staff are more relaxed, families take more time to visit, people seem relieved to have made it to the end of another year, what really makes Christmas special is the music.

Songs are an incredible trigger for memories and whilst Christmas can be a sad time of year for some, in general it is a time when even the deepest regrets can be put aside. It’s a time for remembering; childhood memories when the world was very different to today, cold winters wrapped up warm in front of the fire, a grandsons first Christmas, family reunions, giving and receiving wonderful presents and alongside all of these memories are the songs of Christmas. 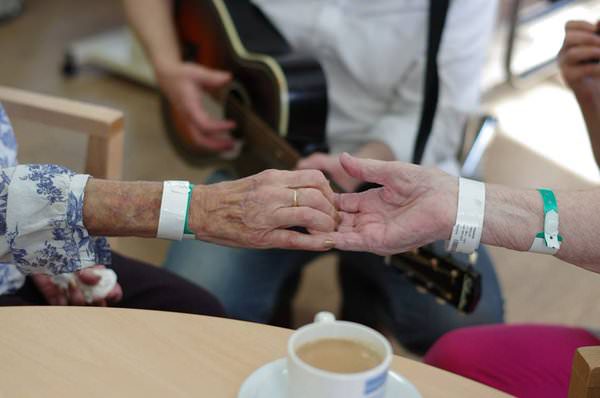 “Songs are an incredible trigger for memories”

There are the classics; White Christmas, Santa Claus is coming to town, We wish you a Merry Christmas, Good King Wenceslas and then there are the party favourites; I wish it could be Christmas Every Day, Rocking around the Christmas Tree, Step into Christmas. There are also the hymns; Oh Come Oh Come Emmanuel, Silent Night, Joy to the World.

The canon of material for these few weeks a year are some of the best, that’s why they’ve endured so long. Sure, by the middle of January we might all be tired of hearing Slade shout ‘It’s Christmas!!’ but as the nights draw in from the autumn, I find their melodies and harmonies a great comfort. Christmas songs are beautiful songs to play and sing, and many times I catch hospital staff singing along even though English isn’t many of the staff’s first language.

It’s music that lifts the spirits but also allows for quiet time and reflection if that’s what’s needed. Sitting quietly by a bedside with a guitar singing ‘Silent Night’ to someone that is confused, scared and alone, (heading into another year not knowing where the future lies) is mutually therapeutic. I am honoured to be allowed the time to sit, sing and play to these brave individuals who have lived incredible lives.

I often remind myself that the songs I am playing someone have accompanied them through so many moments in time. It may be a World War or the birth of children but the soundtrack is the same. These are songs we learn as children and take with us all through life, a constant in a sea of change. Next time you hear a carol, or poor old Noddy Holder shouting at the top of his voice, please remember how Wishing Well brings music to a bedside where the only other noises are the mechanical sounds of machines and the clattering of the tea trolley. Everyone in hospital would rather be at home for Christmas but for many, it’s simply not possible. Hopefully what Wishing Well musicians do is bring some home comfort through music, a small window back to a life once lived and cherished.

Russ is a multi-instrumentalist, music technologist and producer who has worked with a wide range of artists over the last 20 years, both touring and recording. His past successes have included being twice voted for Radio 2’s Single of the Week, an album on the Billboard 100 in the US and a Top Ten album in Japan.

As a music leader he has been Musical Director for a number of youth and adult music projects, including ‘Heritage of the Blues’ and ‘Blues Cafe’ for the Deal Festival; REMIX in Harrietsham, Kent; Live in the Park, in Northfleet; Live and Direct at the Orpheus Centre (SEN/D) in Surrey; and music leader for the new ‘Orchestra of Unlimited Potential (UP!)’ for young people with SEN/D in Surrey, which will perform at the Royal Albert Hall in 2015.

You can find more about the amazing work that Rhythmix do in Brighton and across the South East here.

Movies of the Week: What’s on at Brighton’s Cinemas 16 -22 December