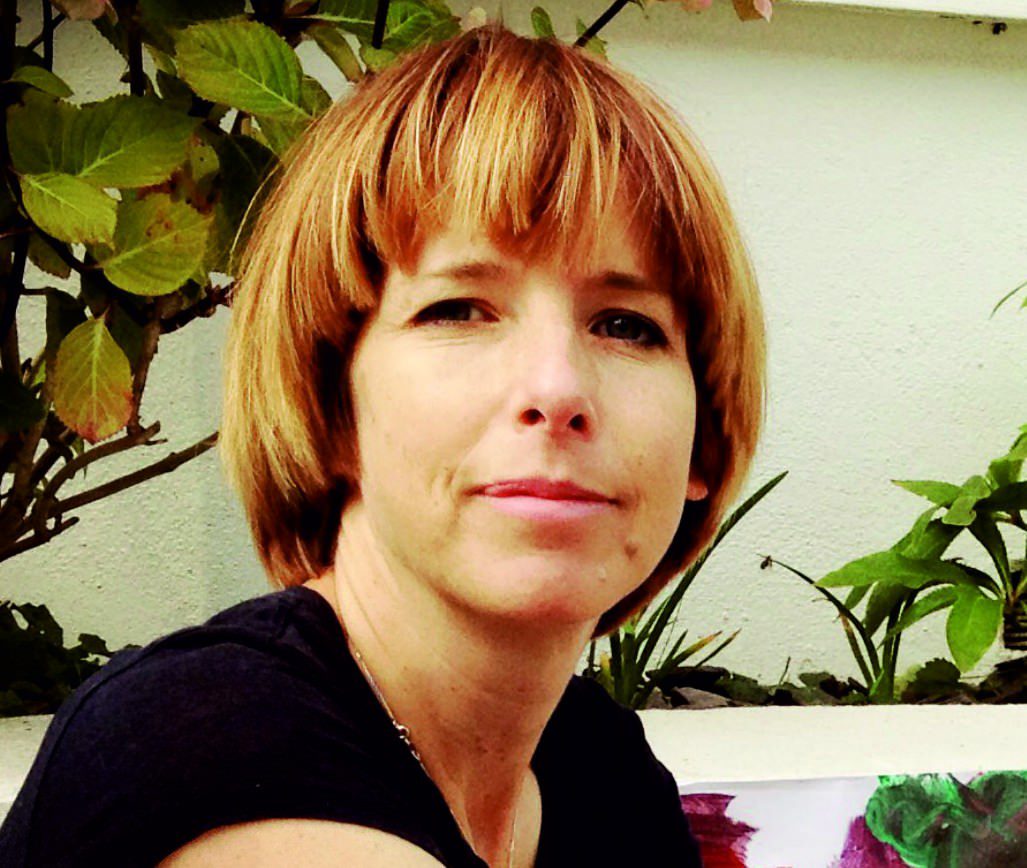 This week Bjournal announced that Yellowave were teaming up with GMC Publishing to host a pop-up book shop this Summer. We were lucky enough to talk to one of the authors, Madeleine Rogers, about her latest release, The Sky Guys.

So tell us about yourself I am a Brighton resident. I never know quite how to describe myself when it comes to my practice because I’m halfway between a textile designer, a graphic designer and a three dimensional designer. I’m quite cross discipline in that respect.

How did you get into 3D Design? The company Mibo, which is still what I trade as, started off as doing lighting and homeware so patterned light shades and things like that. I was looking to sell my work directly and to find a way of doing that. I was a frustrated textile designer, having done TV and theatre for a while I wanted to go back to textiles for a bit. From there, strangely, I took a bit of a turn to create these animal characters which was about five years ago. It was a way of displaying some wallpaper I had designed. Instead of just hanging it on the walls I decided to make some origami animals out of the patterns. So that led me to do these animals which came as little packs that you cut out and make yourself and they came with the patterns on them. That’s what led me to doing the books.

How did that come about? The publisher, GMC, contacted me after seeing the paper animals for sale thinking it would be a really nice idea to do a book around that. I agreed, but at the time I was pregnant with twins so it took a few years before I was able to recover from that and knuckle down and create. We did three books at once and that took a while to do. That was really fun and it was nice to go into the animal’s environments a bit more. I kept it simple, non-fiction, I didn’t want to start giving them names because for me it was about very young children having their first introduction to these animals and to put them in the wild rather than in the zoo. It was very important to me to keep it simple but to be that first introduction into their world.

How long does each book take? From the very first conversation I had with GMC it was probably about two years but I’d say it was more nine months of actual work. In terms of getting the wording right and doing the page illustrations and creating the animals. They all come with pop-out animals at the end and they fold together slightly differently because I wanted to make them simpler. Hopefully there are some young children out there putting them together to make them 3D.

Can you tell me about Sky Guys? That was very exciting I think that one is my favourite. It’s an opportunity to look at the habitat really which was just looking up at the sky. Though they do settle on the ground in different places it was nice to use the sky as the linking habitat and to cherry pick the most interesting birds around the world and to find out more about their habits. Like the Flamingo and how she lays her egg on this tower of mud in the swamps. It’s nice to learn about.

It must be, especially as you have two young kids. Yes, they are starting to learn about these things as I’m illustrating them. 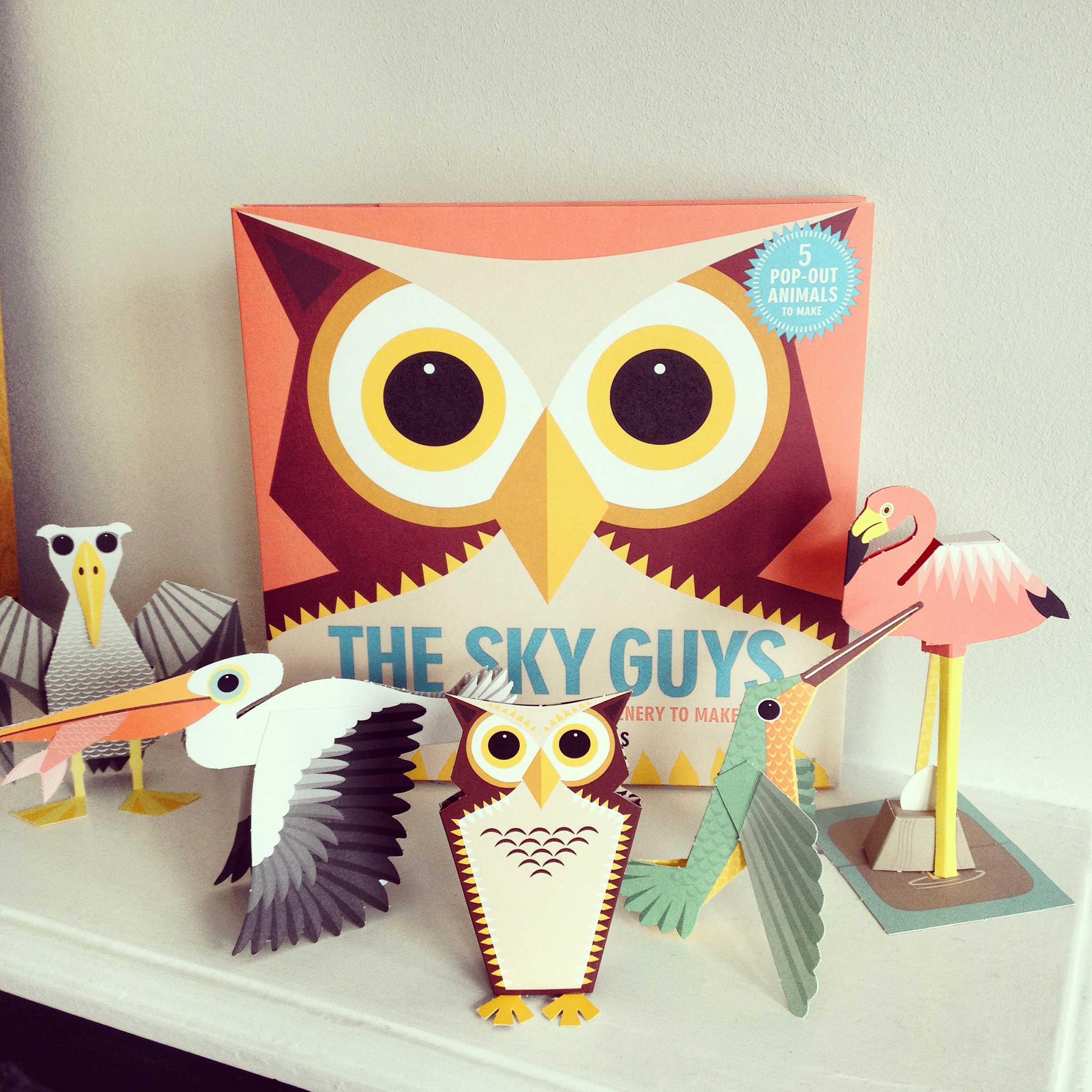 Have you found that they have had an influence on what you include? Definitely! My son in particular, he’s very astute and with one of the first ones that had a penguin in, the polar pack, I had a picture of a penguin with their egg on their feet because they can’t let it touch the ice. I was illustrating that and he said ‘mummy where’s the baby? You have to have the baby hatching out’ so I did do a baby penguin coming out and it made the page much more interesting.

It’s good that you have that input They’re really good, they’re quite strict they hold no prisoners!

Kids are the toughest critics! They really are! So I get it passed them and it’s fine.

When is Sky Guys out? It’s out today!

Where is it available to buy? Well, all good bookshops I guess we can say! A really good one in Brighton is Whirligig which isn’t actually a bookshop it’s a toy shop. That’s one of the interesting things about the books is that they have a cut and make element so it’s more of a craft book. It’s not necessarily sold in bookshops but also in gift shops as well and that’s where Mibo and the other products sit.

Finally, what is your favourite thing about living in Brighton? I love the variety of things you can do. Not necessarily just in Brighton but one minute you can be by the sea and fifteen minutes away you can be at Devils Dyke and then at a farm or walking along the Downs and then in a museum or eating brilliant food. It’s having everything and it’s so accessible.

Sky Guys is available to buy now and you can follow Mibo on both Twitter and Instagram and @mibostudio and check out the children’s book pop up shop at Yellowave.