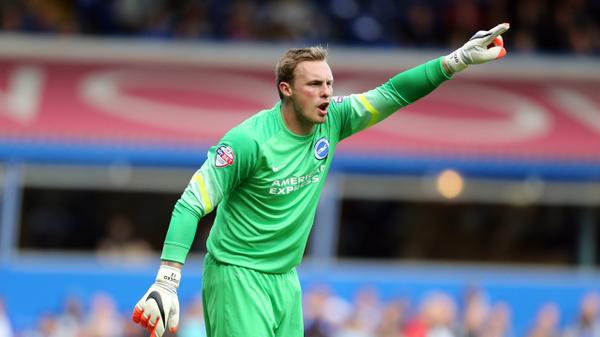 Goalkeepers rarely make headline news for the right reasons, their position being one of such fine margins and after a costly mistake at Reading over the weekend, Brighton & Hove Albion shot stopper David Stockdale left the field in clear frustration.

Albion’s number one, who actually models the supposed unlucky number 13 shirt, spilt Nick Blackman’s long range effort deep into the second half, before Matej Vydra pounced to level the game and snatch two points from The Albion’s grasp, the same point deduction taken from Albion’s lead at the top of the SkyBet Championship.

Albion winger Jamie Murphy had given the away side the lead, dispatching Tomer Hemed’s low cross after wonderful link up play down the right side, which sent the nigh-on 4,000 travelling Brighton fans into raptures.

However, the fans stayed to clap the players off the pitch following the draw, with Stockdale leaving the pitch looking dejected as he ventured down the tunnel in last position.

Stockdale displayed his disappointment over Twitter following the expensive blunder, claiming to be “gutted” about the goal conceded, an apology consistently given throughout his debut season for the club, with a handful of goalkeeping mistakes contributing towards the miserable league finish earlier this year.

However, only a few months on, Stockdale’s fortunes between the goalposts are unrecognisable compared to his early performances in a Brighton shirt. The ex-Fulham man has been a predominant figure in the Albion side so far this campaign, with a collection of match-winning performances during the club’s current run of 14 league games unbeaten.

Most recently, Stockdale produced a string of fine saves to deny Bristol City a route back into the game, as The Albion held on for a 2-1 win in front of the Amex faithful a fortnight ago.

The 30-year-old has looked a changed man this term, injecting confidence back into his own game and earning the respect from his defensive teammates, who have relied on his ability to deny the opposition on numerous occasions this season.

Going unnoticed is usually a blessing in disguise for a goalkeeper; however Stockdale has managed to catch the eye during the opening chapter, for his impressive displays and presence within the Albion goal, with his latest performance the only blemish on a positive season so far.

Unfortunately, goalkeeping mistakes are often more detrimental than that of an outfield player. The room for error is minimal, making Stockdale’s job highly-pressure and open to scrutiny.

A striker can give the ball away for 90 minutes, score the winning goal in stoppage time and provoke heroic headlines in the newspapers the following morning. Rarely can a goalkeeper get away with such low levels of performance and still appear pivotal.

Fortunately for Stockdale, his previous form cushioned the mistake at the Madjeski stadium, including two brilliant saves earlier in the game that kept The Albion in front.

The reaction to Reading’s equaliser was of course a feeling of disappointment, however also one of silence amongst the Albion players. It was a refreshing silence that displayed patience within the team, acceptance of a rare mistake from the valuable man between the sticks and the lack of any temptation to resort to frustration and chaos within the side following the costly error.

Stockdale can afford to erase his recent error from his memory, with the full backing of his Albion teammates, manager and fans, who should all be more than happy with his overall contribution so far this campaign.

The Albion travel to Hillsborough tomorrow evening (7.45pm), looking to extend their unbeaten run to 15 games, as they take on another one of this season’s surprise packages, Sheffield Wednesday.