Home Events The Black Lives Matter Movement: How it started & How to get... 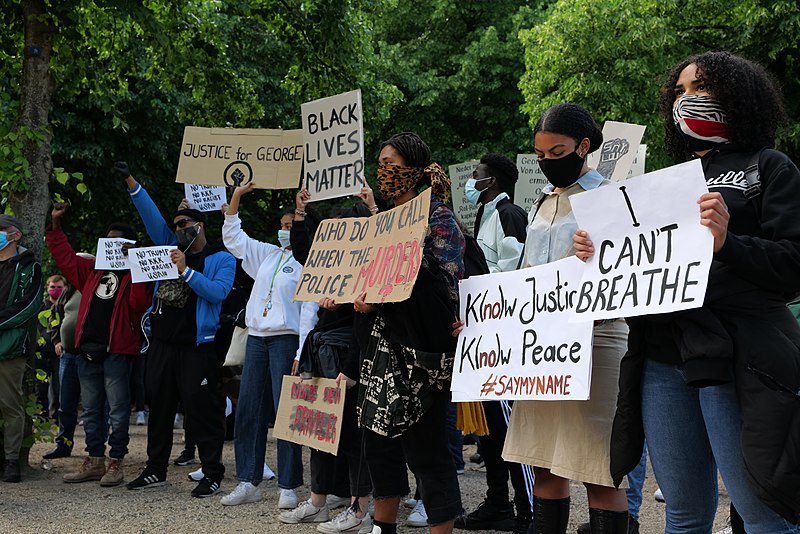 The Black Lives Matter movement has seen all 50 states in America and various countries across the globe join together to fight for equality and human rights. These actions were sparked by the recent tragic death of George Floyd at the hands of the Minneapolis Police Department. This article delves into how the movement started, and how people can get involved.

Black Lives Matter is a movement advocating for the end of institutionalised, systemic racism, particularly towards the Black community. It calls for the end of racial bias in all areas of life, including but not limited to police brutality.

This movement began in 2013 when George Zimmerman, the neighbourhood watchman who shot and killed Trayvon Martin, an unarmed Black 17-year-old, was acquitted on the basis of self-defence and allowed to walk free. Trayvon was staying with his father’s fiancée in the gated community for which Zimmerman was the neighbourhood watch coordinator when the shooting occurred.

Both Martin’s father’s fiancée and Zimmerman’s fiancée were renting homes in this community, where there was said to have been various attempted break-in reports that had caused a sense of fear. Zimmerman had reported several Black males as being “suspicious” in the months leading up to his encounter with Martin. He was told not to follow Trayvon by authorities when reporting him as suspicious. However, he decided to proceed and killed the teenager via gunshot wound during an altercation, 65m from the residence he was returning to after walking to a convenience store nearby.

Zimmerman’s acquittal was largely based on the American “stand your ground” law which allows for self-defence when under physical attack. This law has been criticised by many, including former US Attorney General, Eric Holder, for promoting the use of deadly force and allowing for dangerous situations to escalate, as there is no duty to retreat or exit the situation before resorting to deadly force. 25 states in the US currently have this law in place.

Following Zimmerman’s acquittal, three Black community organisers, Alicia Garza, Patrisse Cullors, and Opal Tometi, began the #BlackLivesMatter movement. It has since become an international collective of people from varying backgrounds, races, and religions, all fighting for Black people’s rights, freedom, safety, and opportunities, as well as to upend systems of institutionalised racism.

On the 25th of May, 2020, George Floyd, a 46 year old unarmed Black man, was killed by officers from the Minneapolis Police Department. The video of now former officer, Derek Chauvin, pressing his knee on Floyd’s neck for eight minutes and 46 seconds while he screamed “I can’t breathe” has been seen around the world. The footage has caused outrage from the Black Lives Matter movement and its supporters, and protests, petitions, and in some cases riots, have all come as a result. All four officers involved in George Floyd’s death have now been arrested. The Minneapolis City Council has even announced plans to disband its police department and invest in community-led public safety and prevention instead.

The UK has seen protests occur up and down the country in support of this movement, with those involved claiming that the UK is not innocent of systemic racism. One of the many cases that has been amplified by the movement to prove this point is that of Belly Mujinga, a female Black railway worker who died from Covid-19 after being spat on at work. Police have claimed there is not enough substantial evidence to justify criminal charges, which has outraged many activists and members of the public, and caused them to call for her case to be reopened. Police have now asked the Crown Prosecution Service to review the evidence, but British Transport Police say the case is not being reopened.

The Lammy Review, which was an independent review into the treatment of, and outcomes for, Black, Asian, and Minority Ethnic individuals in the Criminal Justice System, was supported by two Prime Ministers and “enjoyed cross-party support”. It found that the UK has a higher rate of disproportionality in the prison system for BAME people than the US, and that this overrepresentation in the CJS is estimated to cost £309m per year. The independent review came to the conclusion that:

“These disproportionate numbers represent wasted lives, a source of anger and mistrust and a significant cost to the taxpayer.”

These types of statistics, along with the various others shared in the review, are part of the basis for the Black Lives Matter movement in the UK. One of the more drastic actions taken by protesters in this country to get the attention of those in power occurred yesterday, in Bristol, when a statue of slave trader Edward Colston was torn down and thrown it into the same water where his boats used to dock.

Getting involved with the Black Lives Matter movement

There are so many ways for everyone to get involved in the Black Lives Matter movement, from reading about the topic to being on the frontline of protests. If you want to get involved but don’t know how, here is a handy guide.

If you’re looking for a one stop shop for petitions to sign related to the Black Lives Matter movement, try clicking here. You will find a long list of petitions all fighting for causes supported by the movement. This is another comprehensive list of petitions which also includes other helpful information and resources, and is constantly being updated.

This link will take you to a page that helps you donate in a way that works for you and ensures your money goes towards the specific cause(s) you’d like to support. Believe it or not, even if you have no money to spare, there are still ways you can financially support the movement (how to do so is explained via the link above). Donations can go towards victims, protestors, Black-owned businesses, organisations fighting for the cause, and so on, depending on which part(s) you want to contribute to.

If you are concerned about specifically donating to the UK movement, this Independent article lists 10 anti-racism charities you can send your funds to. Or, this link takes you directly to the UKBLM’s GoFundMe page.

Brighton’s first Black Lives Matter protest took place on the 3rd of June 2020, during which more than 1000 protesters peacefully marched along a pre-planned route, and briefly stopped for some speeches outside the Brighton Police Station and at The Level.

If you’re looking to join in on the city’s upcoming protests, you can do so this Saturday (June 13th). There are two Black Lives Matter protests scheduled for this day, one of which is silent and the other is not. Both are being planned as peaceful gatherings and law enforcement has been made aware of these plans. For more info, click the links provided.

Getting Educated on the Issues

Getting educated on issues related to racism and bias is just as important to the Black Lives Matter movement as protesting, and many activists have shared resources to help with this journey.

Virtual band, Gorillaz, has created a comprehensive list of educational resources – from books, to documentaries, to articles, to Black creators, and everything in between. This list is ever-evolving as more helpful information and resources are discovered. This is another list of resources which includes plays, books, and documentaries that are “essential” to the movement. NPR has put together their own Black Lives Matter learning resource list as well. If none of these work out for you, this is another well-organised list of various learning materials and other helpful information that is regularly being updated.

No matter what your learning style is, if you want to be part of the movement, there is a way to get involved by getting educated in a way that works for you.

Another way to get involved with the movement is to raise awareness about the issues it stands for and against. In this day and age, the easiest way to spread awareness about anything is via social media platforms. By doing so, you could interest people who hadn’t considered the movement before and inspire them to become involved. Social media is an endlessly powerful tool that organisers of the Black Lives Matter movement have urged people to utilise for the cause.

MPs are elected to represent the people of their constituency, so if you feel your voice needs to be heard by those with the power to make a difference, it’s worth reaching out to them. A few of the many issues raised by the Black Lives Matter movement that could be mentioned, are:

There are also templates for pre-written letters which only require you to insert basic information and click send, such as this one on Amnesty International UK’s website.

No matter who you are or what your situation is, there are plenty of ways to get involved with and support the Black Lives Matter movement. For more information and further resources, head to their official webpage at https://blacklivesmatter.com/.