Home Events What’s The Point In An Open Mic Night? 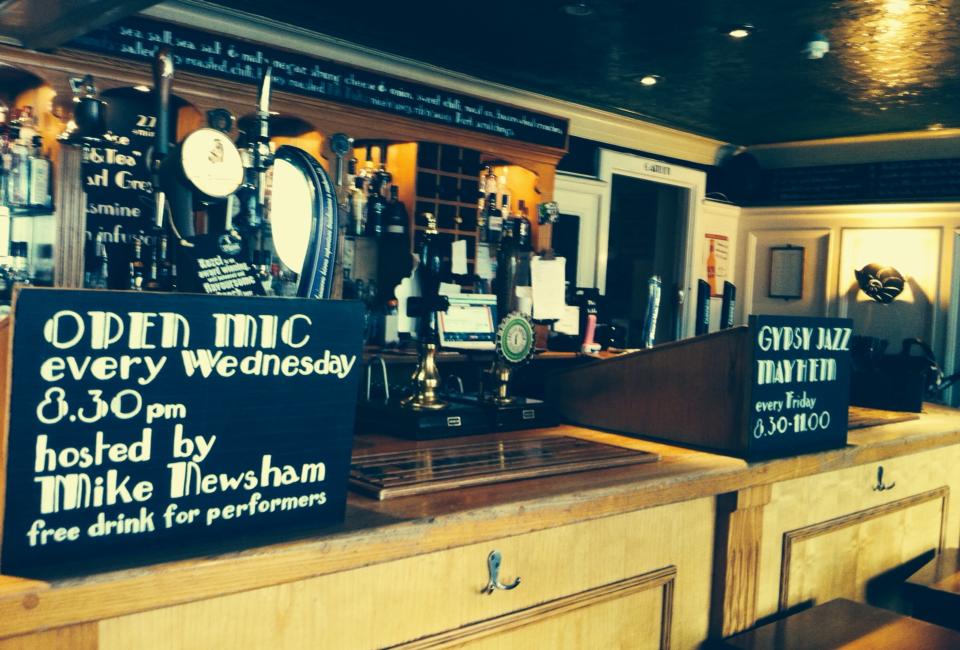 It takes a lot to get up in front of a packed pub and try to entertain them.

It usually takes at least 3 drinks before someone will even consider the notion of doing karaoke, which everyone accepts is just a bit of fun and not to be taken seriously. Expectations are always going to be low as you belt out Wonderwall to a room of strangers with a drink in your hand, so imagine the pressure when the expectations are slightly higher.

An open-mic night for many is the only opportunity to perform to a room of people. The people probably won’t listen, they’ll talk during the songs and they will be apathetic at best. But, for these singers and performers this is as good as it gets, your karaoke is their dream. They take to that microphone with their own expectaitons and their own ambitions, ambitions that stretch far beyond Robbie William’s Angels.

Brighton’s live music scene is constantly growing, with a number of venues across the city housing the biggest and brightest from across the nation – even the globe. News came last week that Concorde 2 is set to be revamped to a higher spec, the cult venue is always trying to entice bigger acts to come and play at the seaside.

We have the Dome and the Centre as well which house some of the biggest names in music.

Aside from these more elite venues there are dozens of pubs across the city that give strangers the chance to go and try their hand at singing you a song. The smaller pubs probably put you within touching distance, but you never know who you will stumble across singing your favourite song. There are literally dozens of these opportunities every evening, and with BIMM and the other universities sprouting out talent like no tomorrow, head to one of the following as you’ll never know what you might here.

The Hop Poles open mic is notoriously good.  Hosted by singer songwriter AMiTY and freelance photographer it is the most organised and well attended night in the city. It boasts great acts and a great crowd, with good drink deals and sound system. There is an in house guitar and a stage, and the opportunity to win free drinks and even a professional photo shoot. Head down on a Tuesday to get involved or support the local scene. You’re advised to get in contact to book a spot!

The Office puts on an open mic night every Wednesday from 8:30pm. The crowds are usually pretty big, and the performers are always pretty good. If you’re looking to play or to listen, this is a great place to start. It is a medium sized pub that boasts a great reputation with customers. The night is weekly so it has a consistent crowd, so get yourself down there. Sydney Street, Brighton.

The Hartington Pub: A former pub of the week, the Hartington offers the chance for bands and singers to come and play to a friendly local crowd. The pub isn’t huge either, so the setting is intimate and maybe takes away the pressure that a large pub would bring. Situated near Elm Grove, the bar staff are notoriously friendly so there will be no pressure here, just a great night of entertainment. Wednesdays from 9.

The Signalman: The Signalman is a pub opposite London Road station. Small from the outside, but big and welcoming on the inside. The location of the pub means you get all sorts of characters going in for a drink, so the audience at it’s open mic is normally big and varied. Sunday is the night for open mic, and this bustling station pub is a great place to test out your material.

The Mucky Duck: A Kemp Town pub which is perfect for the “not so polished” performers.  Anyone who plays gets three songs and a bottle of beer for giving it a go. Skill doesn’t matter, just try it out. The Mucky Duck is famed for it’s open mic night, opening it’s doors to anybody creative who wants to perform – the range is varied as is the audience, so try it out. Musicians are always welcome!

With so many pubs in Brighton there are inevitably a lot of open mics. We haven’t even touched the surface with this list, but what we wanted to show is that the live music scene in Brighton is alive and well, and that there are loads of chances for you to either go and support or try your hand at playing yourself. Play or watch, just ahve a beer and enjoy the city you live in.