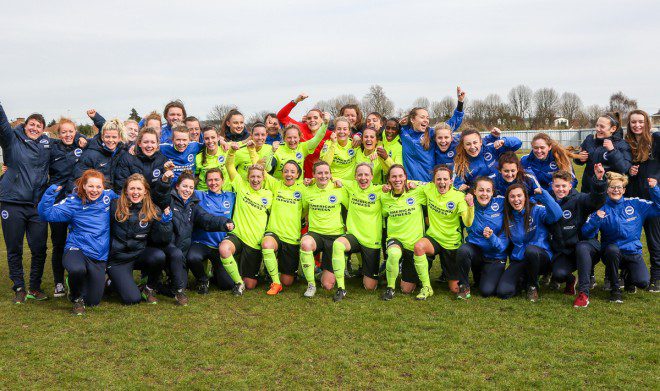 The Baggies, who are affiliated with West Bromwich Albion Football Club, won their penultimate game of the season to book their place in the winner-takes-all play-off match, beating Bradford City 4-1 before resting a handful of their players in a 1-0 victory at bottom-side Loughborough Foxes.

The preparation in which the teams have had going into Sunday’s showdown couldn’t be further apart, with the Sussex outfit not playing a competitive game for seven weeks and losing their influential manager, James Marrs, who had his contract terminated following an internal investigation.

The West Midlands club are unbeaten in 12 league games, rich in match practice and have the psychological advantage over their opponents, who they dumped out of the SSE Women’s FA Cup after a pulsating 4-3 success at Brighton’s home ground, Culver Road.

The Seagulls found themselves 3-0 down in the cup tie, before fighting back to make the scoreline level at 3-3, but with just seven minutes to go, Abigail Cottham struck for the visitors and the southern champions were unable to find another reply.

Despite losing in the cup, Brighton were undefeated in their final 11 league games and although they’ve been without action for well over a month, they’ve had the chance to recover and refresh for Sunday’s crucial play-off final.

Following the dismissal of Marrs, George Parris took over as Interim Head Coach and will take Albion to Adams Park in search of a final victory, that would move the Seagulls to within one promotion of joining the likes of Arsenal, Chelsea and Manchester City in England’s top flight, FA Super League One.

It’s the battle of the Albion’s and only one will be victorious. A 22-game league-winning season will count for nothing for one of these teams on Sunday evening and for the other, well, they’ll be one step closer to the summit of women’s football in England.